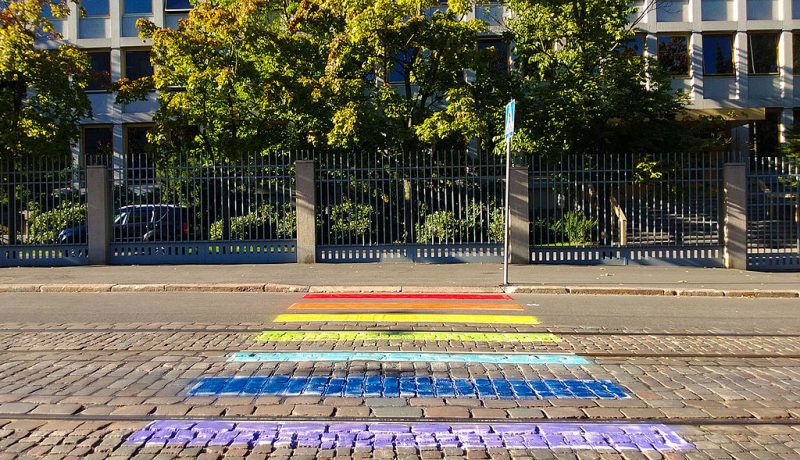 In front of the Russian Embassy in Helsinki, Finland. In 7 September 2013 a group of activists painted the pedestrian crossing stripes with rainbow colors to protest the Russian anti-LGBT sentimentality and legislation, notably the bans on “homosexual propaganda” // Flickr, Murmur, under CC3.0

“The Pinks and the Blues,” a youth theater production about gender stereotypes, has been banned by local authorities in Komsomolsk-on-Amur in far eastern Russia.

Russian media report that company director Yulia Tsvetkova was questioned by a police anti-extremism unit, and that the actors in her amateur collective, teenagers aged 13 to 15, were questioned as well.

The play was intended to be staged as part of an activist theatre festival called Tsvet Shafrana (The Color of Saffron), touching on diverse subjects such as school bullying, the Prague Spring and anti-war themes. The festival has been called off, due to the ban and its loss of a performance venue.

“The Pinks and the Blues”, developed by the activist troupe Merak, triggered intense scrutiny from local authorities who saw it as a dangerous and subversive activity promoting “hatred against men and non-traditional family relations,” Tsvetkova told Takie Dela, an independent charity news website. In parallel, her festival first lost one venue that agreed to host them, and then another one two weeks later. These cancellations sent a clear signal to Tsvetkova that authorities would not allow the festival to proceed.

“Non-traditional family relations” echoes the formulations of a recent law legislating against “propaganda of homosexuality to minors.” In the recent years, it has been used almost exclusively against advocacy groups for gay rights, gender equality and sex education. Accusations of “gay propaganda” can attract large amounts of attention and pressure from local legislators, child welfare and school authorities, as well as the police’s anti-extremism unit — as it happened in Tsvetkova’s case.

Yulia Tsvetkova, a teacher and a feminist activist, says that during questioning, police agents confronted her with print-outs of her social media posts about sex education in schools, feminism and homosexuality.

She denies ever exposing her child actors to any LGBT-related content, saying:

Pink and blue are seen as typically “male” and “female colors”, that’s it. That’s what the play is about, the name was suggested by one of the actors, a 11-year-old child.

Tsvetkova also said the police were acting on three different anonymous letters of complaint against her, all written in the same formulaic language echoing the words of the law prohibiting “propaganda of non-traditional family relations.”

Russia has recently passed a series of socially conservative laws and “traditional values” are regularly mentioned in political speeches and statements. These laws have been used to prosecute activists, health awareness websites and online news media, resulting in fines and website blockages — not to mention intense hate campaigns on social media and other forms of public backlash.