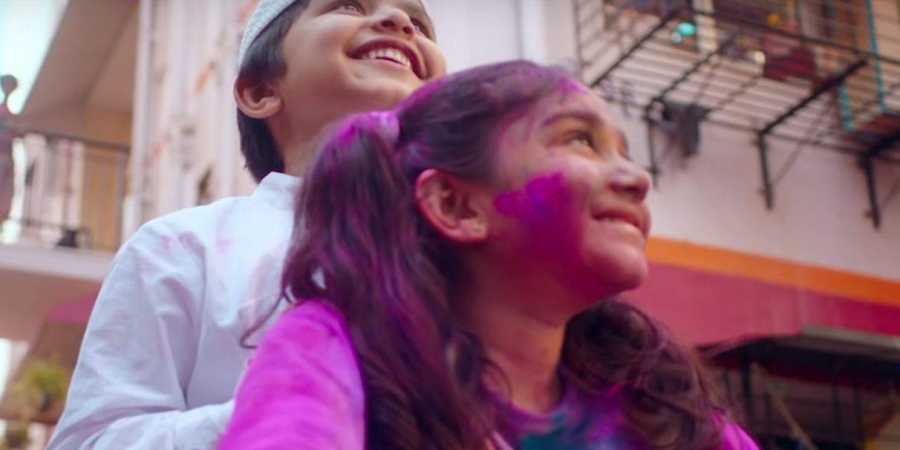 A screengrab from the Surf Excel ad. (Fair Use. Copyright owned by original authors.)

A video by Indian detergent brand Surf Excel showing a Hindu girl and a Muslim boy playing during the Hindu festival Holi has divided viewers and Internet users. While one part supported the communal harmony that the Hindustan Unilever-owned brand is trying to promote through the ad song titled “Rang Laaye Sang” (“colours bring us together” in Hindi), the other part has accused the ad of humiliating Hinduism. The ad has reached 10 million views by the time this post was reported, making Surf Excel's brand name more widespread than ever before.

Those opposing the ad have accused the brand of promoting Love Jihad, an alleged campaign when a Muslim boy fakes love to eventually convert a non-Muslim girl into Islam. Social media began filling up with posts containing hashtag #boycottSurfexcel.

#HUL has no right to preach Hindus how to celebrate Holi and certainly donot need to be taught secularism @PaulPolman Your #SurfExcel ad has hurt Hindu sentiments just like the previous Kumbh ad. Hence we #BoycottSurfExcel & #BoycottHULproducts pic.twitter.com/h6jntJcMyA

People have become so upset by this ad that many Android users reported the Microsoft Excel app on Google Play Store. It has received the lowest one-star rating because users are mistaking it for Surf Excel, going to the level of calling it “Anti-Hindu Software”. This phenomenon is not new in India.

(Translation: Educate your child, save the country)

To the Bhakts. You have no idea how much Surf your outrage helped sell….congrats 🙂 You're practically the new brand ambassadors.

(Editor's Note: Bhakt is the romanization of a Hindi language word that means ‘devotee’. The followers, supporters, and admirers of Indian Prime Minister Narendra Modi are called ‘Modi Bhakt” and on social media ‘Bhakt’ is mentioned to describe the supporters and admirers of PM Modi.)

French researcher Elliot Alderson tweeted on March 12 that there has been 105,929 tweets with three hashtags — #SurfExcel, #BoycottSurfExcel and #BoycottHindustanUnilever.

Thread: For 2 days, I captured 105929 tweets with the hashtags #SurfExcel, #BoycottSurfExcel and #BoycottHindustanUnilever. Follow this thread for an analyse https://t.co/qV06P7fc3K

However, the ad-related debate is no longer limited to the general public but has spread into the political discourse as India is preparing for its general election between April 11 – May 19. In a tweet by Sanjay Jha, a spokesperson from the current opposition party, blame was thrown on the ruling Bharatiya Janata Party  (BJP) for spreading malice against the children in the ad cast.

My next piece coming soon: The vitriol against young children featuring in the #SurfExcel advertisement is enough reason to totally reject the vicious, sectarian #BJP. India needs to dump them wholesale. We have regressed to the Dark Ages under #Modi. #BJP_भगाओ_देश_बचाओ

Hindustan Unilever faced backlash not long ago for another ad related to its tea brand which highlighted the abandonment of the elderly during Kumbh Mela, a Hindu pilgrimage with the world's largest religious gathering.

The timing of this ad is odd, given that it comes as India is recovering from a series of tragic events in Kashmir that includes a suicide bombing on a convoy in Pulwama followed by defensive air strikes by both India and Pakistan. The communal relation between the majority Hindus and the minority Muslims in India, which is larger than the entire population of Pakistan, is going through a critical time as a result of the recent events. This ad could be a scapegoat for such ongoing heated debates.