Why is the Islamic Republic of Iran afraid of Nasrin Sotoudeh? 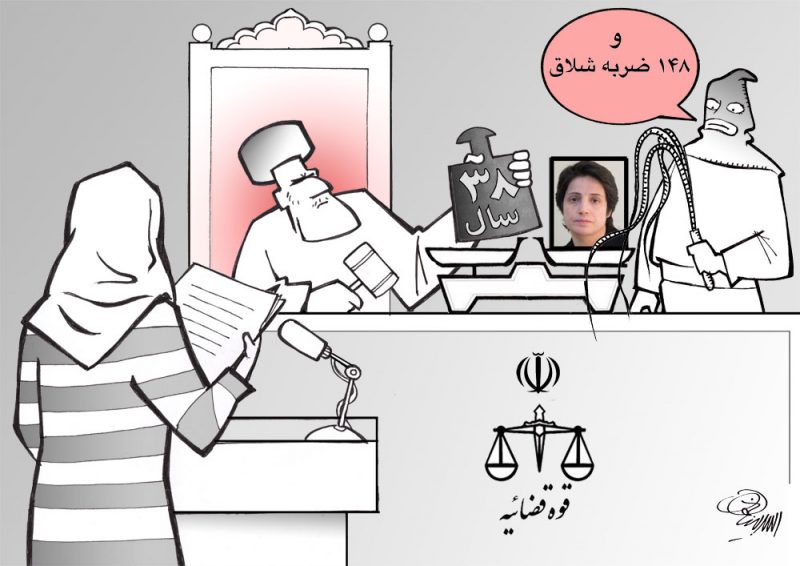 “Outrageous”, “injustice”, “evil” and “crying shame” were among the words expressed by the human rights defenders and many Iranians on social media on hearing the shocking news that Nasrin Sotoudeh, a leading Iranian human rights lawyer, was sentenced to 38 years in prison and 148 lashes because of her work defending women's rights and protesting against the country’s forced hijab laws.

Reza Khandan, Soutoudeh's husband, announced the news on his Facebook page on March 11, 2019.

This tireless defender of human rights who often speaks out against the death penalty was arrested at her home in June last year. The charges brought against her include “inciting corruption and prostitution,” “openly committing a sinful act by… appearing in public without a hijab,” and “disrupting public order.”

Although the Islamic Republic has committed numerous human rights violations during the four decades of its existence, Sotoudeh's sentence was extraordinarily harsh even by the standards of the Iranian judiciary's extremely poor human rights record.

What did the Islamic Republic want to prove with this draconian sentence? And why are Iran's rulers so afraid of Soutoudeh?

Norway-based neuroscientist and human rights advocate Mahmood Amiry-Moghaddam believes that the Islamic Republic is struggling for its survival. In an interview with Global Voices, he says that:

The Islamic Republic is going through one of its worst crises in the past 40 years. They have lost many of their supporters in the last nine years. Poverty is growing, and the vast corruption within the system cannot be hidden anymore. Dissatisfaction among people is increasing. Protests are not any longer limited to the intellectuals and the urban middle class: workers, teachers, students, women, and many other groups are daily challenging the authority of the establishment. The Islamic Republic is struggling for its survival. In a situation like this, anyone with the potential of leading the change is regarded as a significant threat by the authorities. Nasrin Sotoudeh is such a person. She is courageous, can communicate with the ordinary people, stands for the fundamental human rights, has not left the country despite several years of pressure, persecution and harassment, and she is a woman. Nasrin Sotoudeh has all it takes to become a leader. I think the recent sentences against Nasrin must be seen in light of these circumstances. It is a panicked attempt to silence an emerging leader and to send a signal to anyone with the potential of leading a change.

In her peaceful quest to change Iranian society, Sotoudeh follows in the footsteps of the likes of Henry David Thoreau, Gandhi or Martin Luther King.

Ramin Jahanbegllo, an Iranian-Canadian philosopher and Vice Dean and Executive Director of the Mahatma Gandhi Centre for Peace Studies told Global Voices that:

The moral courage of Soutudeh as a woman lawyer is an exemplar of all those fighting for law, justice, women’s rights and Nonviolence in Iran and the world.

The international community reacted strongly to Sotoudeh's conviction. The United States has condemned the new prison sentence in the “strongest possible terms,” and the European Union issued a statement calling it a “worrying development”. The EU's statement notes that Sotoudeh, laureate of the Sakharov Prize in 2012, was convicted following a trial held in absentia, which also featured a number of other violations of the right to due process.

Amnesty International has launched a petition asking people to call on the Supreme Leader of Iran to release Nasrin Sotoudeh immediately and unconditionally, and for her sentences to be quashed without delay.

Dr. Amiry-Moghaddam, who is also co-founder and spokesperson for the NGO Iran Human Rights, believes there is much to be done beyond petitions and statements, and that the EU is in a position to play a key role. He told Global Voices that:

This sentence must not be tolerated by the international community and especially Iran's main dialogue partners in Europe. It is not enough to issue one statement or just a protest without political consequences. The EU must put clear demands in front of Iran. Putting all their efforts on saving the JCPOA [the Joint Comprehensive Plan of Action, also known as the Iran nuclear deal] is not the right thing to do. At the present moment, the human rights condition must be on top of the agenda of the bilateral negotiations between the EU and Iran. It is not only the right thing to do, but also the wise thing to do.

Apart from Sotoudeh, there are many other human rights defenders who have been imprisoned or are under enormous pressure from the Islamic Republic. The UN investigator on human rights in Iran, Javaid Rehman, recently warned that “worrying patterns of intimidation, arrest, prosecution and ill-treatment of human rights defenders, lawyers and labour rights activists signal an increasingly severe state response.”