Carnival may bring out latent body-shaming in Trinidad & Tobago, but this masquerader is having none of it 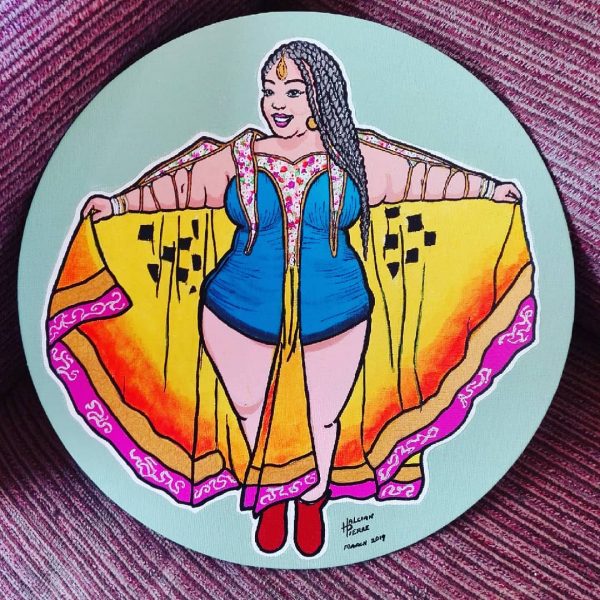 Plus-size masquerader Candice Santana, who recently took part in Trinidad and Tobago's Carnival celebrations, said she decided to join the 2019 street parade after realising that the band “The Lost Tribe” had designed costumes catering for larger sizes. She signed up. Their presentation went on to win the “Large Band of the Year” award, given to the most outstanding portrayal by bands with more than 600 participants.

In a public Facebook post on Ash Wednesday, the day after Carnival, Santana shared photos of her experience, saying:

[The Lost Tribe] ran a campaign endorsing all sizes, shapes and shades. This excited me on many levels because truth be told we are a body shaming society. Some do it consciously and directly while others may not even understand that they doing it.

She went on to chronicle several exchanges that proved her point: fellow plus-size women informing her that “mas[querade] is not for we fat girls”, a photographer asking her to step aside while he tried to take a photo of her friend, two women admonishing their male friend for “wining” [dancing] with her, even a fellow masquerader telling her she looked “beautiful for a plus size girl”.

Despite such indignities, Santana said she “had an awesome Carnival” and declared, “I looked amazing”.

Enter Dr. Fuad Khan, a former minister of health, recorded a video that went viral on social media channels like Facebook and WhatsApp, where he berated Santana for accusing Trinidad and Tobago of being a body-shaming society — saying the issue was one of health.

Claiming that about 60 percent of the population was obese (a 2017 Pan American Health Organization/World Health Organization report puts that figure at about half, at 31 percent), Khan criticised Santana's appearance, lifestyle and willpower, suggested she was playing the victim, and told her to “shut up”. The language he used was particularly vitriolic, referring to her as “a tub”:

We don't want no non-communicable diseases. It's a strain on the health care […] heart attacks, diabetes, eye problems, foot problems, renal problems, respiratory problems because of the stupidness that you're promoting. It's not about fat-shaming and fat acceptance.

Khan has courted controversy before. Back in July 2015, he linked the country's reduced stray dog population with the increase in menu offerings at local Chinese restaurants. This time, the backlash was just as swift.

While I totally support his stance on combating non-communicable diseases (NCDs), for which he has consistently sought to champion, even as the former minister of health, I cannot support the manner in which he approached this latest situation. […] I would be concerned if you were my doctor.

As a [minister of parliament], Dr. Khan should be aware that he represents all types of people who come in various shapes, colours, genders, with different religious and political beliefs, and ethnicities. As such caution must be exercised in the things one says and does.

The truth of the matter is that we don't know the real reason behind the young woman's weight gain.

I recall that I spoke about body shaming regardless of size, shape or shade. I also recall that I said that I am not endorsing an unhealthy lifestyle […] I encouraged everyone to switch towards a healthy lifestyle, including a balance[d] diet and exercise, but maybe he didn't look at the entire interview or he missed that part. I even indicated that I made changes to my lifestyle.

[I] forgive him for the harsh words dished out at me. I look myself in the mirror and remind myself that I am beautiful inside and outside. I also remind myself that this is an opportunity to show love and not get caught up in any negativity.

Khan later apologised for his tone but stood by his message.

The reason why weight loss supplements is a billion dollar global industry is because many women feel the need to conform to societal standards of beauty. Not health… Beauty. […]

The issue is people, like yourself, who refuse to see the contributions we can and do make to society all while battling against people who feel comfortable to treat us as second class citizens or casually insult or laugh at us without considering what steps we are taking to work with bodies that may have underlying medical complications that make weight loss difficult and weight gain easy. […]

If you stand behind what you said and the insulting and condescending tones embedded in your message, that's completely your choice.

Voting is MY choice and you better believe my fat finger will never vote for any political party that has you on their slate of candidates.

Facebook user Suzette Louwe, however, suggested that all the people pledging their support for Santana were being hypocritical:

We know that we criticize and fat shame all the time. But unlike Fuad, we do it in private. Does that make us better? […] Criticize him all you want and he's probably well deserving of it. But don't forget to correct it in yourself too.

Santana has said that she is grateful for the outpouring of support she has received online; plus-size artist Halcian Pierre even painted a portrait of the masquerader in full costume, explaining:

Her experience really touched me and I am in absolute awe of her for her inner strength and for the love she carries in her heart. ?????