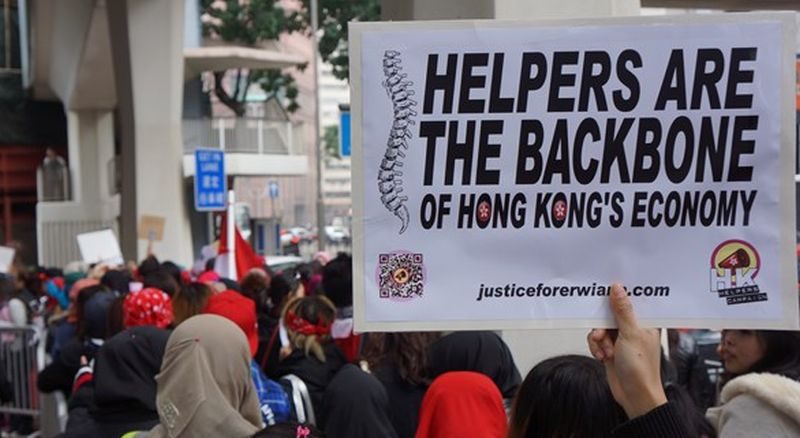 The following post is originally written by Jennifer Creery and published on Hong Kong Free Press on 6 March 2019. The edited version is republished on Global Voices under a content partnership agreement.

Foreign domestic workers contribute HK$98.9 billion (US$12.6 billion dollars) to the city’s economy, making up 3.9 percent of the GDP, according to a study released on March 5.

Despite this, the study also revealed that domestic workers were largely excluded from the local economy – only 18 percent owned a bank account and 85 percent had high levels of debt. A lack of financial knowledge and awareness of bank account regulations were identified as key barriers to accessing financial services.

The report, titled The Value of Care: Key Contributions of Migrant Domestic Workers to Economic Growth and Family Well-being in Asia, is the first time the economic contribution of migrant domestic workers in Hong Kong has been calculated. It was commissioned by consumer credit report company Experian and jointly presented with local NGO Enrich. The data was calculated by market research firm Frost & Sullivan according to the value domestic workers add based on the cost of their work (when paid at local rates) as well as their personal spending, and the time they free up to enable local women to join the workforce.

According to the findings, the largest contribution domestic workers offer to the local economy is childcare — valued at HK$40 per hour at an average of 3.85 hours per day. This totals HK$184,970.52 per year.

There were 369,651 foreign domestic workers living in Hong Kong at the end of 2017, with the number set to rise to 600,000 by 2047, according to the government. Lucinda Pike, Executive Director of Enrich said:

Domestic work is, in many ways, invisible and undervalued work that disproportionately falls on women, often migrants. We are thrilled that this research shows how the presence of domestic workers unlocks extra economic potential.

According to the study, migrant domestic worker employment increases the number of dual-income households by enabling local women to join the workforce. Only 49 percent of Hong Kong women aged 25 to 52, with children, would work if they did not have a domestic worker. This figure increases to 78 percent when they do.

But critics have said that, in spite of migrant domestic worker’s contribution to the local economy, they continue to face discrimination. Sringatin, the chairperson of the Indonesian Migrant Workers Union, told Hong Kong Free Press:

The problem is migrant domestic workers are not recognised by the Hong Kong government as part of Hong Kong workforce and Hong Kong community…We are treated as foreigners, low-class workers and therefore the government has been pushing for policies and practices that exclude and isolate migrant workers from the whole Hong Kong population.

This is what we mean by modern-day slavery practices. And it is enforced by the Hong Kong government through policies and regulations.