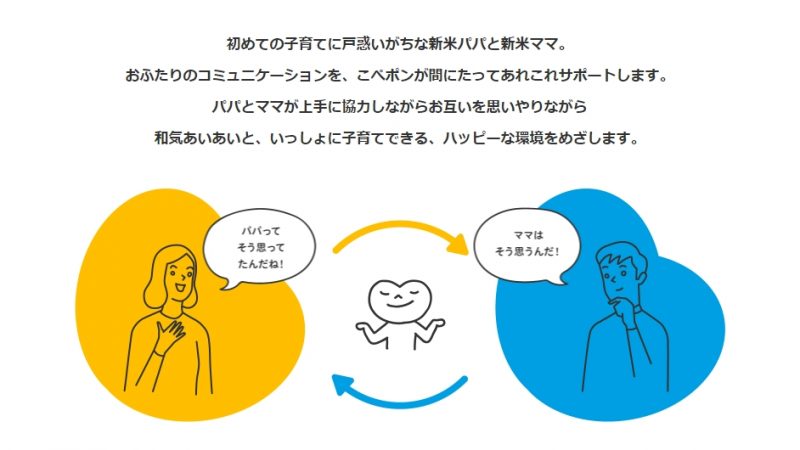 The Cope app encourage spouses to share responsibilities during child rearing, aiming to facilitate communication between spouses by having the mascot “Cope” act as an intermediary. Image from official Cope website, widely shared on social media.

A Japanese candy maker has been criticized for reinforcing conventional gender roles and facilitating emotional manipulation after launching an advertising campaign and creating a mobile app to help husbands “translate” what their wives are saying. Some of the promotional web content has since been taken down, but not before igniting a discussion that questions the campaign's assumptions about the biological differences between men and women.

Popular Osaka-based confectionery maker Ezaki Glico created the “Cope” app to accompany the launch of its ‘Co-Sodate Project (Co育てProject)’. ‘Co-Sodate’ is an adaptation of the Japanese word for child rearing, kosodate (子育て). The “co-” comes from the English words “communication”, “cooperation” and “co-parenting.”

According to Glico, the purpose of the project (besides advertising Glico products) is to “make sure all children who are born grow up healthily and rich in heart” (生まれてきてくれる子どもには、元気に、ココロ豊かなに育ってほしい!).

The campaign's free mobile “Cope” app allows spouses to exchange messages, read articles about pregnancy and child-rearing, and keep child-care records. According to the Asahi Shimbun, a local newspaper, the app was primarily developed by female employees at Glico, but the project was overseen by Ihoko Kurokawa, author of several books about relationships, including “How to Handle Your Wife” (妻のトリセツ, Tsuma no Torisetsu).

According to the Asahi Shimbun, the Cope app's advice for husbands includes how husbands can identify, interpret and decode “eight patterns” that occur when a wife becomes angry, “translating” the supposed true meaning of what's being said:

When she says, “It is meaningless for us to remain together,” the site says what she really means is, “How do you feel about me?”

When she says, “It is really hard to do this,” the site says she really wants to say, “Will you appreciate what I did?”

The Cope app soon attracted criticism on Twitter for its apparent dismissal of women's concerns.

Image reads: “It is really hard to do this,” does not equal, “Will you appreciate what I did?” but, “You should also do this.”

I was really shocked by this blatant display of disdain for women based on the notion that you don’t have to take what women say seriously, but just show some sympathy and gratitude as a gesture.

I've fixed it for you guys. Big improvement, don't you think?

For example, if a woman asks, “What's more important to you, your job or your family?”, the Co-Sodate campaign suggested men respond with “I’m sorry for making you feel lonely,” and to rapidly change the subject to his own problems at work:

This app is no more than an easy way out for selfish men who want to avoid the responsibilities of housework and childcare, but don't want their wives to get angry with them. The developers themselves showed extreme insensitivity and irresponsibility in creating an app like this in the first place.

There's no solution other than husbands (and fathers) helping with housework and childcare. When are people going to get it?

Content since removed from the Co-Sodate website, but captured and preserved on several blogs, generalized that communication difficulties between men and women arise mostly due to differences in neurology:

As the male brain and the female brain are different in terms of the structure of the circuits and signals, their output will differ even if they get the same input.

The advice included generalizations such as:

The male brain's ‘intuition function’ leaves much to be desired […]  Above all else, the female brain craves sympathy.

J-Cast News reported that the Co-Sodate campaign's assumptions about the differences between male and female brains were criticized for being unscientific.

Yuko Yotsumoto, a professor of cognitive neuropsychology at the University of Tokyo, criticized Co-Sodate's advice, arguing:

Recent research indicates that the disparity deriving from individual differences is greater than any generalized disparity based on gender. Therefore, the assertions [made by the website] are not based on fact.

Yotsumoto added that any gender-based differences were not necessarily based on different “structure of the circuits and signals” as was claimed, but could be due to the influence of the environment.

While I won't deny that the output of female and male brains will differ even if they get the same input, it's a mistake to put this difference down to different structure of circuits and signals. Perhaps it has more to do with the different positions men and women occupy, and the different roles they take on within the home. Rushing to attribute these differences to “brain science” without even considering any other potential causes is recklessly irresponsible.

Yotsumoto's interpretation is backed up by recent research conducted by other neuroscientists around the world, which reasons that the notion of the gendered brain has arisen out of “the need for a scientific account of women’s inferior status,” and serves to reinforce gender stereotypes.

In an opinion piece, freelance writer Ai Nakazaki criticizes the Co-Sodate website, pointing out how focusing on such gender stereotypes can downplay the importance of individual differences.

However, men and women are each individuals, and dividing them into two distinct categories like this is pointless.