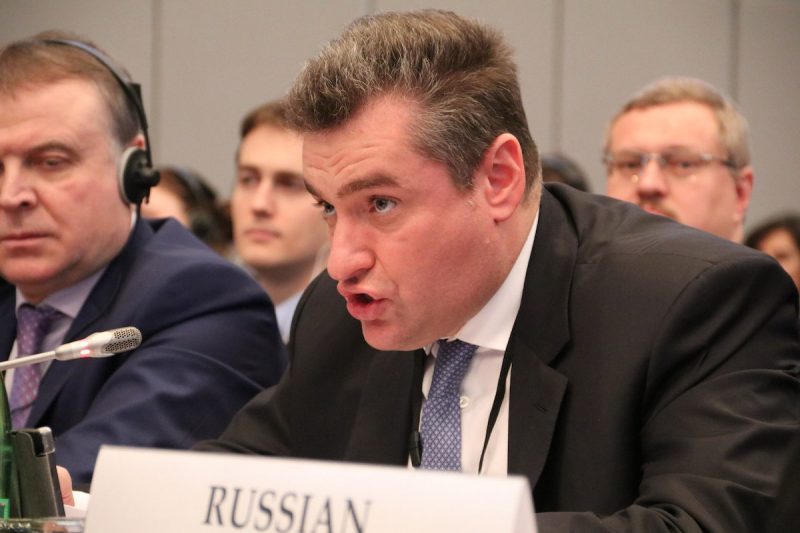 Russia will send a delegation to the 2019 UN Commission on the Status of Women, to be held at the United Nations headquarters in New York City on March 11 to 22  — but the leader of said delegation has raised a few eyebrows.

Leonid Slutsky, a member of the far-right populist Liberal Democratic Party of Russia (LDPR) in the State Duma, has been at the center of a scandal [1] since March 2018, when several women reporters working in parliament accused him of sexual harassment.

Leonid Slutsky, a parliament member prone to grabbing women reporters by the crotch, will be reporting in the UN about the status of women in Russia during his taxpayer-paid trip to New York

The Russian delegation includes four women representing the main parties in the Duma, the lower chamber of the Russian legislature. Leonid Slutsky [4] (pronounced SLOO-tski, not to be confused his namesake, the football coach) has been a legislator since 2000 and now chairs the Duma’s foreign relations committee. As such, he is mandated to represent Russia at various international parliamentary assemblies and other events and forums.

While only three women came out with public accusations against him, it was alleged that there were more victims who didn’t wish to come forward out of fear of retraumatization or the general desire to forget the incident and stay out of the story.

One of the accusers, Farida Rustamova of BBC Russian, had a tape of her encounter with Slutsky. During an interview in his office at the Duma, Slutsky made several lewd remarks towards Rustamova and then proceeded to grab her by the genitals despite her vocal protests. She presented [5] a transcript of the tape at the Duma's ethics committee — which refused even to consider the evidence against Slutsky and cleared him of any wrongdoing.

When it became clear that Slutsky would not be held responsible for his alleged actions in any way, dozens of independent Russian news outlets declared a boycott of the Duma, pulling out their reporting and pledging to withhold any coverage of the parliament not connected to the harassment scandal. However, the protest eventually fizzled out, and most of the publishing houses resumed their coverage, with some reassigning women journalists who reported not feeling safe in the parliament’s halls to different beats.

The independent Journalists’ and Media Workers’ Union filed a petition with over 700 signatures [6] to the OSCE Parliamentary Assembly demanding Slutsky’s credentials to be revoked, only to be told that it wasn’t up to the assembly to decide who represents a certain country. And since there is no law in Russia under which Slutsky could be charged with sexual harassment in the workplace, it’s unlikely that any other international organization will review his membership there, either. It’s also unlikely that such a law will be passed any time soon: only one woman legislator of the Duma raised the possibility [7] of resurrecting a 15-year-old bill that would criminalize sexual harassment in the workplace, and there hasn’t been any progress since.

It’s notable that Oksana Pushkina, the only Russian parliament member to support other women accusing her colleague of harassment, was not included in the delegation to the 2019 UN Commission on the Status of Women. Instead, it’ll be Tamara Pletnyova from the Communist party, who vocally rallied behind Slutsky during the scandal. Pletnyova is known for her conservative views and has made a number of controversial remarks recently: she advised Russian women against interracial sexual relations [8] during the 2018 World Cup and said gays were “sick” and needed to be “cured” [9] during an interview on national television.

Russia scored 73.1 points out of 100 in the gender inequality index. It stands next to last among all post-Soviet countries, with only Uzbekistan faring worse.

Considering Russia’s far-from-stellar record in protecting women’s human rights and ensuring gender equality, Slutsky’s appointment as the head of a national delegation to a global forum on the status of women can only be regarded as an act of cruel trolling.