Women's groups, LGBTQIA+ groups and some men resisted patriarchy together. 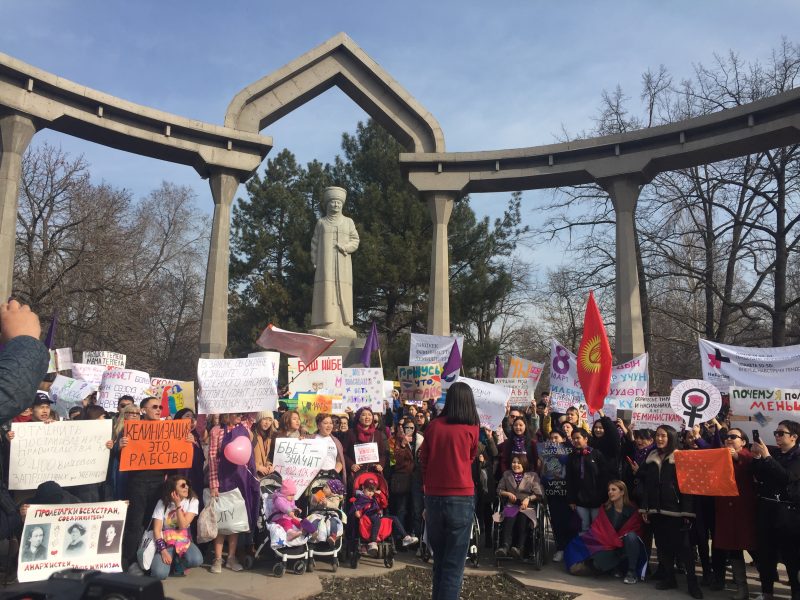 A rally for International Women's Day in Bishkek. Photo by Aisha Jabbarova. Photo taken in front of the statue in Bishkek of Kurmanjan Datka, a Kyrgyz female clan leader born in the 19th century.

Authorities in Kyrgyzstan's capital Bishkek walked back a hastily-imposed ban on a rally on International Women's Day which went ahead uninterrupted despite provocations from pro-patriarchy vigilantes.

Bishkek officials had briefly on March 6 imposed a ban on a rally that has been organised by the Bishkek Feminists Initiative (BFI) annually on March 8 since 2016 to honour International Women's Day — a public holiday in most ex-Soviet countries.

The capital's municipality initially cited “personal safety of citizens” as a reason for the ban and did not elaborate further.

But then officials surprisingly reversed the decision just a few hours later following coverage by local media and vigorous criticism on social networks like Facebook.

In the end, the rally saw around 150 people march in the city centre and call for an end to violence against women while urging equal rights between genders. 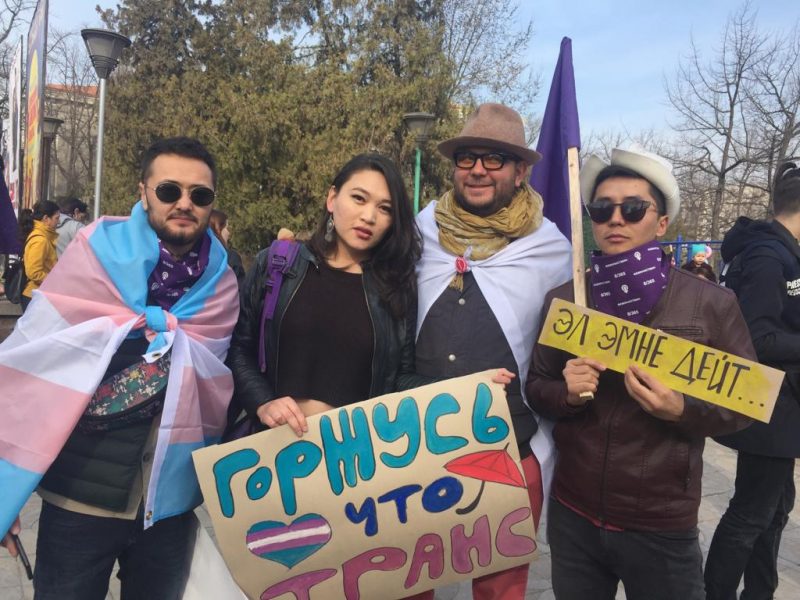 A rally for International Women's Day in Bishkek. Photo by Aisha Jabbarova. Largest banner reads: “I am proud of being transgender.”

The rally was attended by people from different walks of life and highlighted the diversity of society in Bishkek that nationalist groups — often operating with significant political support — have attempted to pin back in recent years.

Nazik Abylgazieva, an activist from the local Labrys LGBT organization said it was “important to attend the rally despite the pressure and attempts to ban it.”

“I joined the rally to demonstrate that I will not be silent, even though there are attempts to exclude me from all societal processes as a member of LGBT community,” Abylgazieva said. 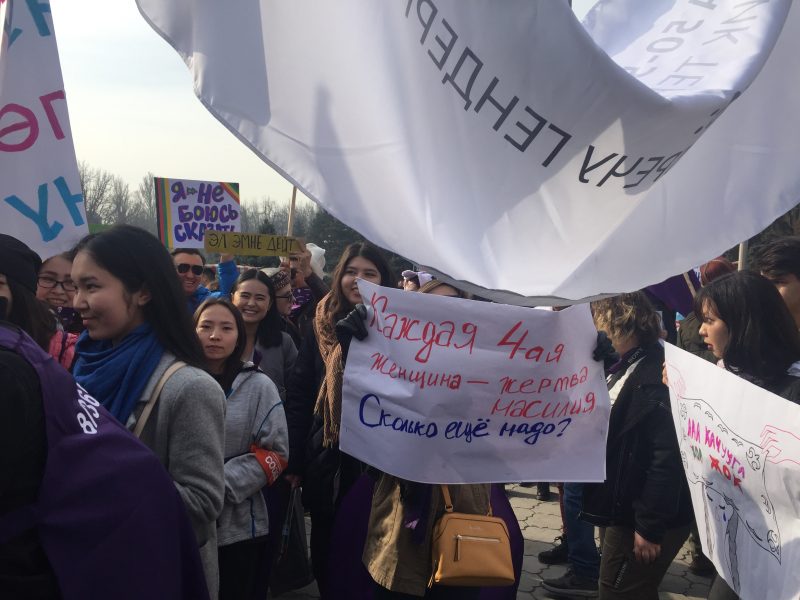 A rally for International Women's Day in Bishkek. Photo by Aisha Jabbarova. One banner reads: “Every fourth woman is a victim of violence. What more is needed?”

International Women's Day remains one of the most important dates in the calendar in countries such as Kyrgyzstan, which was a constituent republic of the Soviet Union before independence in 1991.

But many feminists complain that the day has been reduced to a flower-giving ceremony, reinforcing patriarchal views of women as homemakers and shedding the emancipatory origins of the date.

I want you to remember where the 8th of March came from. It is a day for women and girls rights, human rights. It is not just a day when we pay more attention to women, it's a day, when all of us should stand for equal rights. #InternationalWomensDay #humanrights pic.twitter.com/kCv6HFm5dS

Reflecting this trend, Kyrgyzstan's neighbour to the south, Tajikistan, rebranded the day as Mother's Day in 2009. In the country's vast neighbour to the north, Kazakhstan, women have been effectively banned from holding March 8 rallies for several years now.

Long-reigning Kazakh leader Nursultan Nazarbayev regularly rings in the holiday with a barrage of sexist jokes. 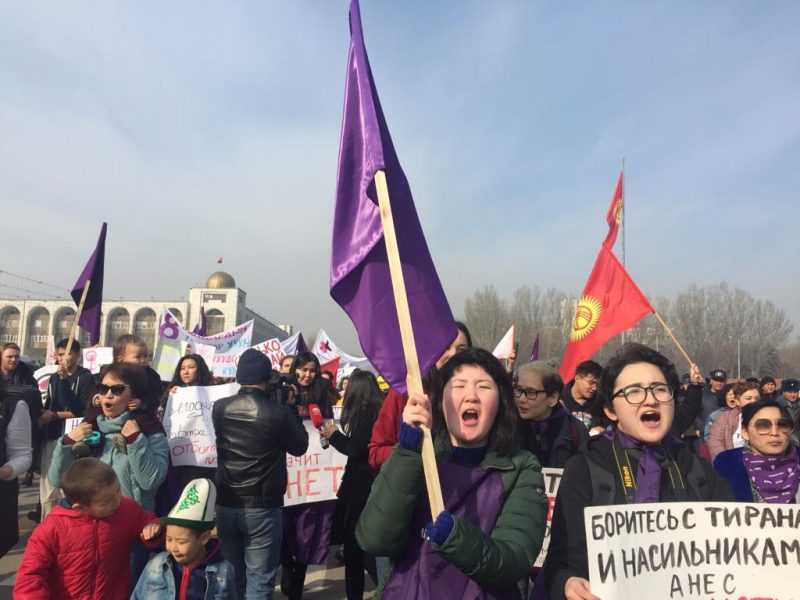 A rally for International Women's Day in Bishkek. Photo by Aisha Jabbarova.

This year, according to Bektour Iskender, the founder of the Kloop media outlet, who attended the rally, the demonstration was for “human rights, and the rights of all those discriminated against.”

Abylgaziyeva of Labrys echoed those sentiments in her interview with Global Voices:

Among my acquaintances are sex workers, HIV positive women, women who have history of drug abuse, doctors, teachers, actresses, musicians, artists, women of all backgrounds. However, we are all united by one thing – by the fact that we are being beaten, raped, and our rights are being limited. By attending the rally I am challenging myself as well as the system.

Guliaim Aiylchy, BFI's chairperson, told Global Voices that holding the rally was important in and of itself:

If we don't rally today, five years later, the right to (rally) will be taken away from us.

While Kyrgyzstan remains the most democratic country in its immediate region it is one full of worrying trends in terms of discrimination and violence against traditionally marginalised groups like the LGBT community.

Women's rights are also a battleground in a country where kidnaps for marriage and violence against women are prevalent and often go punished.

In recent years, socially conservative positions have been reinforced with tearful consequences thanks to groups like Kyrk Choro, a patriot movement that had pledged to break up this year's March 8 rally on the eve of holiday.

Kyrk Choro shot to notoriety in 2014 thanks to video-taped raids on nightclubs and karaoke bars where the group shamed local sex workers for fraternising with non-Kyrgyz clients.

Members said they had notified the municipality of their intention to break up the rally, a fact that may have moved authorities to ban the event to begin with. 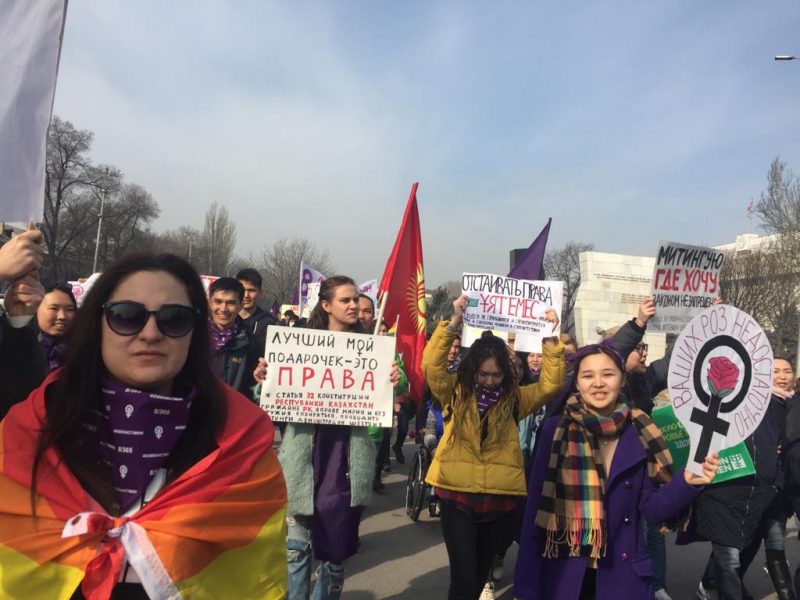 A rally for International Women's Day in Bishkek. Photo by Aisha Jabbarova. One of the banners reads: “The best present you can give me is my rights.”

On the day itself, individual members of the group showed up in small numbers — seemingly only to give flowers to participants. The event was well policed.

But the presence of so-called ‘patriot’ undercurrents in society has left many already vulnerable groups feeling more targeted than ever.

A transgender woman named Lola told Global Voices on the eve of the rally that attending the event was important “to be visible, to be heard”, but that she was not sure whether she would join the gathering.

I don’t know whether it is safe for me or not. It is difficult for us [transgender people] to go out. We don’t trust anyone any more. We are attacked frequently. Often times there is a risk for us. Some people don’t consider me a human being.