Harris died in 2018, but his legacy lives on 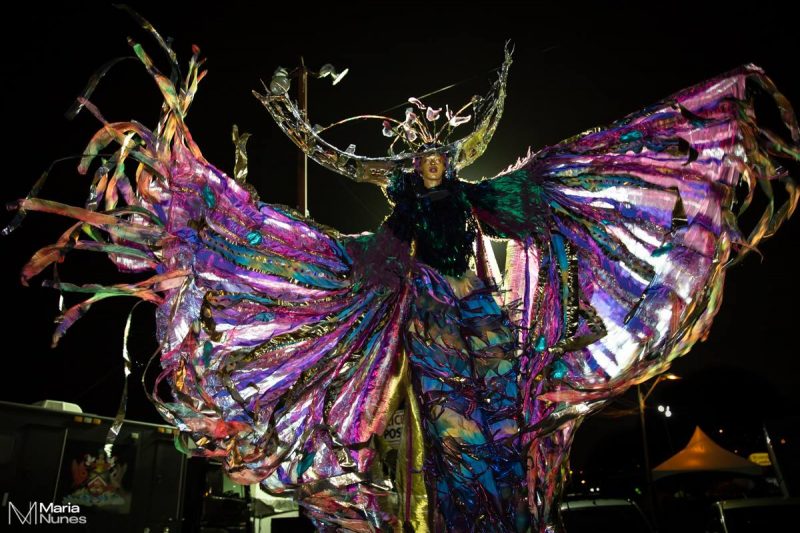 Tekel “Salti” Sylvan portraying “The Peacock becomes the window to the universe”, designed by Alan Vaughan from Moko Sõmõkow's 2019 Trinidad and Tobago Carnival presentation, inspired by Wilson Harris’ “Palace of the Peacock.” He placed second in the King of Carnival competition. Photo by Maria Nunes, used with permission.

The great poet and novelist Wilson Harris died exactly one year ago. Or did he? Like one of his characters, Harris has come back. He has returned in the form of a band of moko jumbies — a motley crew of painted spirits striding high above us on wooden stilts, roaming the concrete jungle of Port of Spain, haunting Trinidad’s Carnival.

This is “Palace of the Peacock”, a mas[querade] by Alan Vaughan’s Moko Sõmõkow band, based on Harris’ dense, beautiful and wildly ambitious novel of the same name.

Watching the moko jumbies leave their mas camp at Erthig Road, Belmont, the mood of Harris’ novel is palpable. Just as the book’s band of crusaders embark on an epic quest, these masqueraders set out for the wide green expanse of parkland at the centre of the city, the Queen’s Park Savannah.

Why a novel? Why bring a “mas” based on a book? And a book by an author with a style as dense as Wilson Harris’?

Why? Because this is a book that teaches us to levitate.

Everywhere in Harris’ book, we are asked to look up. At the sky, at the sun, at swinging gates, at trees, birds, waterfalls, stars, comets, at dangling nooses, up ladders, and even at houses built on stilts. So, too, do we now look up to these mokos.

But as is typical of Harris, nothing is one thing or another. What is dead is also alive; what is up is also down: “The whispering trees spin their leaves to a sudden fall wherein the ground seemed to grow lighter in my mind and to move to meet them in the air” (“Palace of the Peacock”, p. 28).

The book’s plot has been the subject of endless critical debate. Ostensibly, a band of adventurers are on a quest, journeying through the rainforests of Guyana to find Mariella, a fabled woman, a symbol, maybe a Helen, a patriarchal fantasy figure who turns everything upside down.

Yet “every boundary line is a myth,” (22) the character called Donne warns. We are in the landscape of the mind, a “chaos of sensation” (24), a “masquerade of appearances” (13). To make sense of the words of “Palace of the Peacock” we have to cut through it diagonally or else we drown.

Harris’ surreal book is not prose. It is a book-length poem; a rich pelau in which the twins of past and present are blurred, as the Mayans might blur them. People appear, each a “character-mask” (8), each both dead and alive.

Says the narrator: “I dreamt I awoke with one dead seeing eye and one living closed eye.” Dreaming and awake, traveling yet not moving. Slowly, the novel reveals its secret. Its subject emerges, like the star-studded peacock that gives the book its title, at the very end, making it plain we have been reading a self-portrait in the form of a written mas.

Here is a book that challenges the idea of the novel, turning it into a Carnival of the soul. It seeks now, through this band of moko jumbies, a new audience. And it finds it. 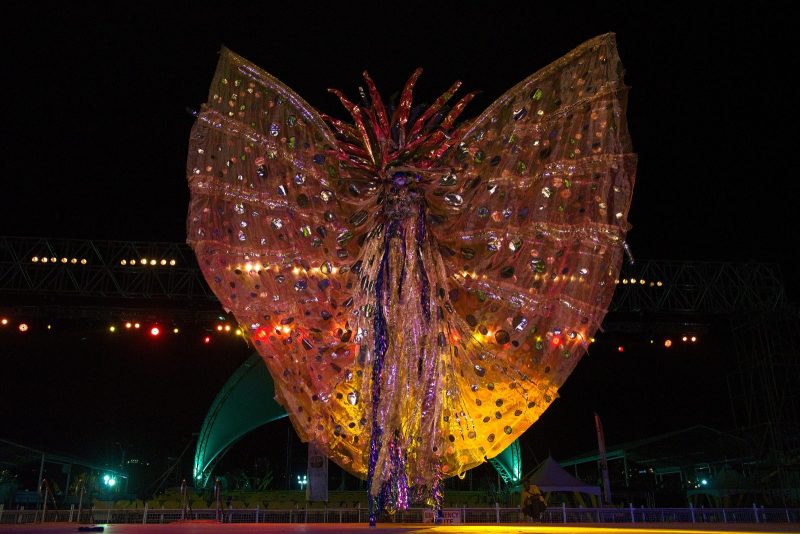 Moko Somõkõw designer Alan Vaughan as ‘The Sun Rises and Overwhelms the Sinnerman’ during Trinidad and Tobago's Senior King of Carnival Preliminaries at the Queen's Park Savannah on February 21, 2019. Photo by Shaun Rambaran, used with permission.

On the first night of the Kings and Queens of Carnival competition at the Queen’s Park Savannah, Vaughan crosses the stage. He’s plucked a single line from the novel and built a costume around it. “The Sun Rises and Overwhelms the Sinnerman” is a coruscating metaphor prancing to Nina Simone’s “Sinnerman.” Like a blinged-out version of Peter Doig’s 2007 painting “Man Dressed As Bat”, Vaughan is gorgeous, radiant, yet gloriously ambiguous as he looks down on us, a giant studded moth with eyes lined with red. Your blood flows faster.

Vaughan does not advance to the next round, but fellow band members do. One goes on to win the Queen of Carnival title, another places second overall. The sign of a renaissance?

Moko jumbies have a long history. The word moko has been linked by some to Orisha traditions in Nigeria, Togo, Benin, Guinea, and Senegal. Moko is a deity of fate and retribution, while jumbies, or ghosts, are understood to be a Trinidadian inflection. Moko jumbies emerged as a popular character in Trinidad Carnival in the 1900s.

But while mokos hark back to West African traditions, today stilt-walking is accessible to all within Trinidad’s multicultural society. You can even learn to become a stilt-walker, with groups such as #1000mokos hosting regular classes at contemporary art space Alice Yard in Woodbrook, Port of Spain.

And in recent years designers have been pushing the moko jumbie to its limits. In 2015, Stephanie Kanhai became the first to win the Queen of Carnival title with “The Sweet Waters of Africa,” designed by Vaughan. The next year, Peter Minshall made a sensational return to the King of Carnival competition with “The Dying Swan: Ras Nijinsky in Drag as Pavlova.”

The power of Minshall’s design was the way it incorporated the rigid wooden stilts as a part of the mas, turning them into a ballet dancer’s legs en pointe and fusing African and European traditions in a way that also pointed to Carnival’s queerness. 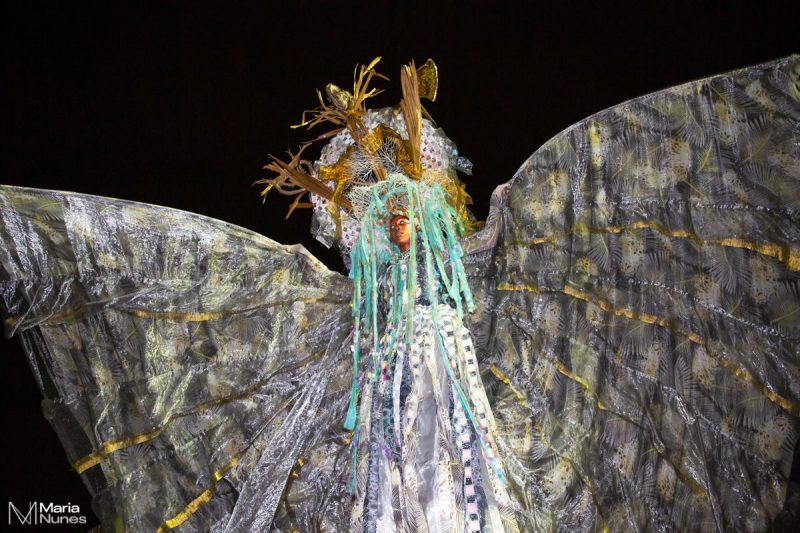 This year, Peacock’s queen “Mariella, Shadow of Consciousness,” played by Shynel Brizan, wins the Queen of Carnival title, with Brizan becoming a kind of Madonna figure, embodying the novel’s character. She is at once bold yet vulnerable, a phantasm.

And marching alongside her is Tekel ‘Salti’ Sylvan, who places second in the King of Carnival competition with “A Peacock Becomes the Windows of the Universe,” a maelstrom of blue, purples, and gold, topped with a fancy sailor flourish: a window warped like a satellite dish to form a strange crown. In the preliminaries, Sylvan’s face is painted white with a shock of red across his lips.

Also in this holy procession is Russell Grant, in a moko that might as well be Vigilance, another indigenous character in the novel who acts as a kind of gatekeeper and observer. When the band hits the road on Carnival Monday and Tuesday, there's a group of trusty troops to support it on the ground.

Moko jumbies might look to the past, but this band’s inhabiting of Harris’ novel opens up fresh possibilities. It’s a perfect marriage between one imaginative world and another; a kind of meta-fiction or cosplay in the extreme. And what a procession it all amounts to!

The players leap from the writer’s mind and into the streets walking through crowds of people, like Moses parting the sea.