With hundreds of political prisoners still in jail, the Nicaraguan conflict is far from over 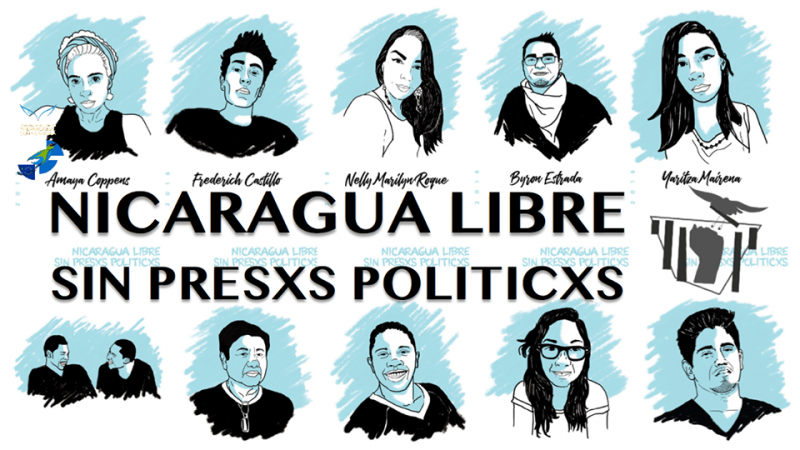 Main image of the campaign for the release of political prisoners, from the “For a Free Nicaragua Without Political Prisoners” collective. Used with permission.

Nicaragua made front-page news in April 2018 as demonstrators protesting social security reforms clashed with police on the streets of Managua, leaving two dozen people dead. Today, activists have shifted their attention to campaign for the release of political prisoners, who are estimated to number in the hundreds.

While the Nicaraguan government announced in a sudden move on 7 March that it had released 100 prisoners, many questions remain. The released prisoners have no indication, so far, of whether their charges have been dropped. And activists estimate that several hundred other people remain behind bars.

The protests began in the spring of 2018 in reaction to a government decision announcing changes in the pension system. This first wave of protests was followed by repression; the situation then escalated to many protesters being wounded or murdered. This in return led to demonstrations demanding the resignation of President Daniel Ortega and of vice-president Rosario Murillo.

After those street demonstrations ended, police repression and political arrests forced many people to remain inside their homes. Feminist activists and human rights defenders, as well as journalists, have continuously been targeted or have been forced to leave the country to continue their work in exile.

Given the lack of official data from Nicaraguan state agencies, the estimated numbers of dead, wounded and political prisoners change depending on the time period, and the organizations that provide them. In September 2018, an Amnesty International report indicated that 300 people were imprisoned for their participation in the protests. In November 2018, the Nicaraguan Center for Human Rights (CENIDH) reported that there were more than 600 political prisoners in the country.

The Inter-American Commission on Human Rights (IACHR) counted 325 deaths in December 2018, before it was expelled from the country by President Ortega.

The situation of people in prison following the protests is complex, especially since the protests themselves were declared illegal in September 2018. A report by Amnesty International documents cases of arbitrary detention without due process. This means that large numbers of people were detained without being told the reason for their arrest, and are still being kept behind bars without a trial. According to Nicaraguan law, a detained person has the right “to be [released] or placed at the order of a competent authority” within 48 hours of the arrest.

The figures of political prisoners seem to have increased: in January 2019, the support committee for the families of detainees, called “For a Free Nicaragua Without Political Prisoners,” registered and located 767 people behind bars. The group also shares profiles and testimonies both on Facebook and Twitter, and details the situation of political prisoners and their families for non-Nicaraguan audiences:

The majority of the political prisoners are young people, many of them students. Most of them are held in the capital city of Managua, at the police jail ‘El Chipote‘ or the state penitentiary ‘La Modelo‘. Female political prisoners are largely held at ‘La Esperanza’ women’s prison. Conditions at the Chipote jail are horrific and stories of torture and (sexual) abuse rampant. At La Modelo political prisoners are purposely kept separate from the regular prisoner population in the maximum security pavilion known as ‘La 300’. They are thus purposely kept in isolation and, even though not yet convicted, kept under a regime meant for long-sentenced prisoners with disciplinary issues.

Allegations of abuse and sexual assault

Amnesty International‘s report also highlighted testimonies of torture and intimidation. The report illustrates irregularities in the detention process and supports allegations of sexual abuse as well, such as in the case of C.D., a 19-year-old woman:

C.D. described how during the interrogation she heard the heartbreaking cries of a woman, and how she was threatened [by authorities] saying “You are here and she is there, but if you do not speak, you are going to be with her”. After she would return to the cell, in the middle of the night, a hooded man dressed in civilian clothes would come to interrogate her, and threaten her by saying: “[I can kill you or I rape you], you decide.”

A group of prisoners in the La Esperanza (in Managua) prison explained the conditions of their imprisonment during the visit of several Members of the European Parliament (MEP). Socialist MEP Ana Gomes shared the videos of the testimonies on social networks:

Inside the prison cell, they explain how they were arrested and that they are accused of carrying chemical weapons, nuclear bombs … absurd!!!! pic.twitter.com/6qyp1ADvn8

The complaints do not seem to have gone unnoticed. Relatives of the prisoners in La Esperanza prison reported that a large number of them had been severely beaten and that some have been disappeared. It is suspected that these attacks may have taken place in retaliation for public complaints.

“Nicaragua Libre Sin Presos Políticos” is a group that advocates for the freedom of these students through online activism, sharing profiles, testimonies and making alliances with other groups that continue to share these stories online. They have published some of the stories explaining the causes imprisoned activists care about, their advocacy work and the circumstances in which they were arrested.

Other campaigns on Twitter are denouning detentions and disappearances, as well as the precarious conditions of many of the detainees, as does the Mesoamerican Initiative of Women Human Rights Defenders organization:

179 organizations demand #LibertadRuthMatute!
She is a political prisoner in #Nicaragua since October 2018
⚠Suffers from a serious heart condition and her life is in danger