The propaganda video is lyrically dense and often grammatically questionable. 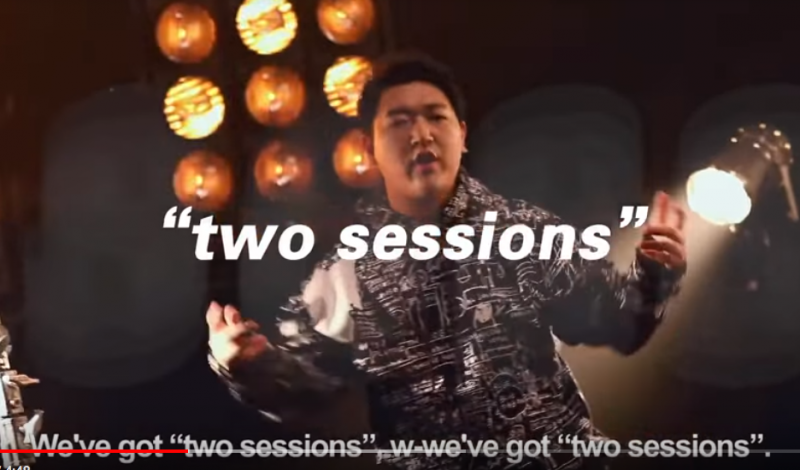 The following post is originally written by Holmes Chan and published on Hong Kong Free Press on 4 of March, 2019. The edited version is republished on Global Voices under a content partnership agreement.

This year, the “two sessions” began on March 5. Released just a day ahead of the political conference, the music video, which was composed and performed by Chinese rapper Su Han, depicted the “two sessions” as an opportunity to showcase China’s strengths.

The video features snapshots of China’s recent achievements, including its moon lander, poverty alleviation efforts and the Sunway TaihuLight supercomputer.

Lyrically dense and often grammatically questionable, parts of the ditty verge on incomprehensible.

“It’s like a summertime paradise, likewise butterflies in twilight. See the Larch rolling miles upon miles, when we meet satisfied Popeye,” one line goes.

“Never gonna be the earth invader forcing it into hunt in Cretaceous. Gotta be the Ready One Player when in front of dirty polluter,” read another. “Eject all the rapaciousness like shaking off nephrolithiasis.”

Nephrolithiasis, also known as kidney stones, is a disease that affects the urinary tract.

On Twitter, the “two sessions” rap video was greeted with some eye-rolling, as well as some genuine surprise. Below is one of the Twitter discussion threads on the political propaganda:

I still don’t understand the reference to Popeye and Ready Player One in the “Two Sessions” rap. Spielberg eating spinach inside the Great Hall of the People? pic.twitter.com/hpHPgxPXuH

But some found the quality better than expected.

In recent years, the Chinese Communist Party has been using popular musical genres such as rap in an effort to get its message across to westerners.

In an effort to commemorate the 20th anniversary of Hong Kong’s transfer of sovereignty, Xinhua produced a track praising the city’s “One Country, Two Systems” policy of autonomy. And in 2016, a music video promoting Xi's “Four comprehensives” mixed Beethoven with hip-hop beats. Chances are strong that “Two Sessions” is just the latest in an ongoing series of such productions.