‘We are not bots!’ In Berlin, thousands protest proposed EU regulation on internet upload filters 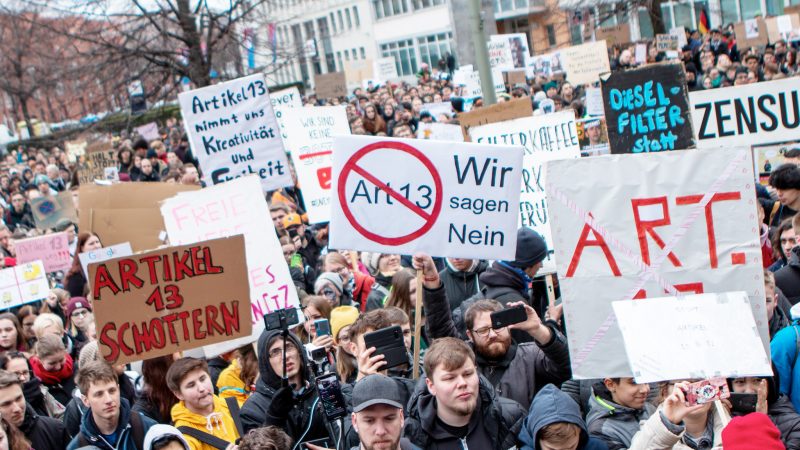 An estimated 5,000 people gathered in Berlin on March 2 to protest a proposed EU copyright rule that could radically shift the dynamics of posting and sharing content online.

Among other provisions, Article 13 of the draft EU Copyright Directive would require internet platforms like YouTube to install “upload filters” — a technical mechanism that would block users from uploading copyright-protected content, effectively imposing a system of “prior censorship” on major internet and social media platforms.

The protest was part of a series of gatherings that will culminate in European Union-wide protests on March 23, netzpolitik.org reported.

Demonstrators in the German capital braved the icy cold weather and marched from the Axel Springer skyscraper, past the Ministry of Justice and on to the Brandenburg Gate. While the organizers had originally expected five hundred demonstrators, they estimated that more than ten times as many people came to demand protection of internet freedoms.

The Berlin protest was organized by the alliance “Berlin gegen 13″ (Berlin against [Article] 13) which includes civil society organizations promoting digital rights and media freedoms, informal groups, and political parties opposing this aspect of the Directive.

The secret discussions have ended with the worst version of the “Censorship machine” we have seen so far. Citizens need to react, once again, to prevent these upload filters that threaten our freedom of expression from becoming reality.

The Berlin protest was third major offline gathering of people opposed to Article 13. Demonstrations in Cologne on February 16 and February 23 also attracted thousands of citizens.

In his speech at the Berlin protest, Markus Beckedahl the founder and editor-in-chief of media activism site netzpolitik.org stated: “We are not against copyright. But we are against compulsory upload filters!”

Demonstrators carried colorful signs reading “We are not bots,” “Diesel filter instead of upload filter”, “Save the Internet” and chanted the lyrics of the song “Wir sind keine bots” (We are not bots) made by YouTuber Willboy specifically in opposition to Article 13:

The song was released on Friday, a day before the demonstration, and become a viral hit with over half a million views in just a few days.

Breaking: @ManfredWeber and the @EPPGroup want the vote on #Article13 and the Copyright Directive moved ahead to next week to pre-empt the #SaveYourInternet/#StopACTA2 protests! We need a public outcry to stop this! pic.twitter.com/6XQSWNbgpa

Whether or not the Copyright Directive is approved, digital rights advocates will have more battles to fight in the near term, when it comes to policy proposals seeking automated technical solutions to online content challenges. A European Commission committee tasked with addressing “terrorist content” online has proposed a similar solution that would obligate online platforms to begin using automated tools to “detect, identify and expeditiously remove or disable access to terrorist content.”

At a public conference in January, Evelyn Austin from the Netherlands-based digital rights organization Bits of Freedom expressed deep concern about policies that move in the direction of prior censorship: