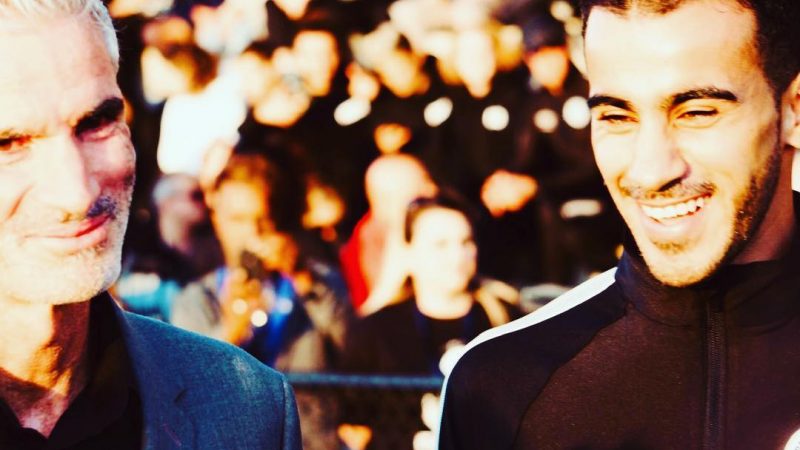 Football player Hakeem al-Araibi (right) is back in Australia after more than two months in detention in Thailand. Photo from al-Araibi's Instagram account.

After 76 days in detention, Bahraini refugee Hakeem al-Araibi was released by Thai authorities on 11 February 2019. Global sports bodies and football players were among those who actively campaigned for his freedom.

Al-Araibi was a member of Bahrain's national football team, until he publicly criticized the violent crackdown against protesters (athletes among them) in the aftermath of the 2011 Arab uprisings. He was arrested and tortured for speaking out against abuse. He fled the country in 2014 and sought asylum in Australia, where he ultimately was given refugee status. He has since played for several football teams in Melbourne.

Al-Araibi and his wife traveled to Thailand for their honeymoon vacation last November. When they checked in for their return flight to Australia, al-Araibu was arrested at Bangkok's Suvarnabhumi Airport by Interpol officers who were acting on an extradition request from Bahrain.

The extradition request stemmed from a second case against al-Araibi, who was convicted in absentia on charges of vandalizing a police station. He disputes this and says that his public critiques of football officials and members of the royal family is the reason behind his prosecution.

News about his arrest led several football groups in Australia to call for his freedom. Al-Araibi’s team, the Pascoe Vale Football Club in Melbourne, urged Thai authorities to allow their teammate to go back to Australia:

Pascoe Vale FC is proud of the work that we have done working to help protect refugees from around the world, and we participate in networks dedicated to that cause. We are also proud to call Hakeem al-Araibi our friend and teammate.

Craig Foster, a former captain of the Australian Socceroos team, campaigned online and offline to secure Al-Araibi’s freedom. In an opinion piece for The Guardian, he wrote that “it was a fight for the soul of sport.” He added:

We think that this campaign showed what sport can be, and our job as former players or athletes is to ensure that all sport becomes the vanguard for human rights.

But Foster also revealed how Australia's treatment of refugees affected the campaign for Al-Araibi's freedom. He explained this in an opinion piece for The Sydney Morning Herald:

I have waited until after Hakeem was safely home [from Thailand] to explain that one of the reasons it was so difficult to garner international support was because of our own treatment of refugees. This was a constant theme throughout discussions with international stakeholders.

Supporters in Australia and beyond mobilized efforts online and off. Several weeks later, Bahrain dropped its extradition request and al-Araibi was released and allowed to return to Australia.

The success of the campaign also underscores the potential of sports in advancing human rights advocacy. Brian Dooley, an advisory board member of the Gulf Centre for Human Rights, was inspired by the global solidarity for Al-Araibi:

This is the closest thing I’ve ever seen to a world football community acting together – local clubs and big stars connecting and pushing to have a footballer saved from being sent to a repressive dictatorship.

The last few months showed us that there is some sense of an international football community that isn’t controlled by billionaires, that it’s a massive force, and that it can be galvanised to fight and win against powerful interests.

I’ve learned so many valuable lessons these past weeks when it comes to how strategic communications can make a difference to people in need. Football can indeed be a unifying force and (those who administer it) very influential at all levels, when it wants to be. #SaveHakeem

Emma Race, an Our Watch Fellowship recipient and member of the Outer Sanctum podcast, appreciated the political significance of the #SaveHakeem campaign:

This effort has relied on sport exercising its political muscle to achieve the outcome. It has done so with none of the usual criticism that sport should not be political.

Aya Majzoub, the Lebanon and Bahrain researcher of Human Rights Watch, wrote about how “global sports groups can make use of their human rights policies to have a real influence on human rights.” She reminded other sports teams about their role in upholding human rights:

Other sports organizations – including Formula One, whose races begin in Bahrain on March 28 – should strengthen their internal human rights policies. They should make it clear to Bahrain that they will not stay silent when sports are used as an arena for human rights abuses.

This is particularly relevant for Bahrain, which Amnesty International's Allan Hogarth once accused of “harnessing …the glamour and prestige of sport [to] deflect attention from the arrests of peaceful critics, reports of tortured detainees, unfair trials and death sentences.”

In an opinion piece for The Guardian, reflecting on his experience as an athlete who criticized torture and abuse, Al-Araibi discussed the link between sports and politics:

Evidently, it is a myth that sports and politics do not mix. Authoritarian states use sports to raise their profile, like the World Cup, or Formula One races. But when athletes and individuals call attention to this practice they are imprisoned and forcibly silenced.

Al-Araibi returned again to see a homecoming game at the Pascoe Vale FC on 22 February.