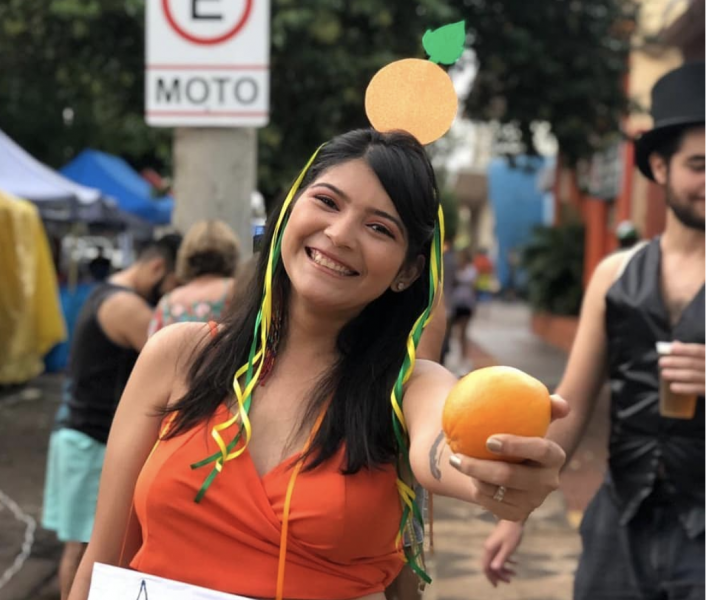 It has nothing to do with fashion trends or a Carmen-Miranda-like pride: Brazilians who paraded on the streets of several major cities this Carnaval season wore orange costumes to send a message to President Jair Bolsonaro.

In Brazil, the Portuguese word for orange, “laranja,” is also slang for intermediaries of fraudulent financial schemes.

Two schemes involving Brazil's president or his family — the kind of old, corrupt plot he promised to fight if elected — allegedly made use of “laranjas.”

In December 2018, Rio de Janeiro state prosecutors opened a probe against Fabricio Queiroz, a retired police officer and longtime friend of the Bolsonaro family who received suspicious cash payments in 2016 and 2017 while he worked as an aide to the president's son Flavio Bolsonaro, at that time State Deputy for Rio de Janeiro (now senator for the same state). The Brazilian internet later dubbed this the ‘Bolsogate’ scandal.

And in February, newspaper Folha de S. Paulo revealed that the president's party allegedly diverted public campaign funds to candidates that never ran for office during the 2018 elections. Amid the scandal, President Bolsonaro fired one of his key allies, former Secretary General of the President's Office Gustavo Bebbiano.

In December 2018, the Council for Financial Activities Control (COAF), a federal regulatory agency, disclosed that 1,2 million Brazilian reais — over 300,000 US dollars — had flowed through Queiroz’s bank account while he worked as a driver and aide to State Deputy Flavio Bolsonaro. Eight employees of Flavio's cabinet made payments to bank accounts belonging to Queiroz, who withdrew part of the money himself and made one payment — of around 6,700 US dollars — to the now first lady Michelle Bolsonaro‘s personal account.

The destination of most of the money is still unclear. Living in a simple house in the suburbs of Rio, Queiroz doesn’t seem to have benefited from the sum, therefore the “orange” suggestion.

Meanwhile, 48 cash deposits of 2,000 reais (around 500 US dollars) were made anonymously to Flavio Bolsonaro's bank account in 2017, all from an ATM located inside Rio de Janeiro State Legislative Assembly. Financial institutions are less likely to flag smaller amounts, but the series of deposits, made within a few minutes of one another, led investigators to suspect fraud. Flavio claimed the payment referred to the sale of an apartment to a friend.

Queiroz’s daughter Nathália, one of his four relatives employed by Jair Bolsonaro himself when he was still a congressman, is also under investigation. According to The Intercept Brasil, she never set foot in Bolsonaro’s office in the 22 months while she was on the cabinet's payroll (between 2016 and 2018). Not even as a visitor.

She is suspected of having been a “ghost employee,” someone who is on the payroll but doesn’t actually do the work for which they were hired. If confirmed, Nathália wouldn’t be the first “ghost employee” linked to Jair Bolsonaro. Last year, newspaper Folha de São Paulo broke the news on how another staff member was selling açaí bowls during her office hours more than a thousand kilometers away from the capital Brasilia.

Investigators have been summoning Queiroz to explain himself since December. He only did so only in late February, and in writing: in a letter to prosecutors, he said he merely attempted to “expand” the number of employees who worked for Flavio Bolsonaro, and without the Senator's knowledge. Queiroz went missing for a few weeks and later came forth saying he had been hospitalized for cancer treatment. In a TV interview, however, he didn't remember the name of his doctor or the hospital where he stayed.

In January 2019, newspaper O Globo revealed that Flavio hired relatives of a retired police captain who is a suspect in the murder of councilwoman Marielle Franco and her driver Anderson Gomes.

Folha de São Paulo revealed the second orange story in February. According to Brazil's electoral law, all political parties must set aside 30 percent of its funds to female candidates as a means to increase female participation in legislative seats.

People from Bolsonaro's party PSL (which stands for Liberal Social Party) are suspected to have used female candidates as a façade to pocket the money to themselves. Two of Bolsonaro's ministers allegedly knew about the scheme, and one of them was fired amid the scandal.

Meanwhile, the president himself doesn't seem very pleased with the protests and orange puns taking the streets. On Tuesday, March, 5, he tweeted:

Just as important as the economy is the rescue of our culture, which has been destroyed after decades of governments with a socialist bias. We will pursue the country of order and progress. Good morning everyone!