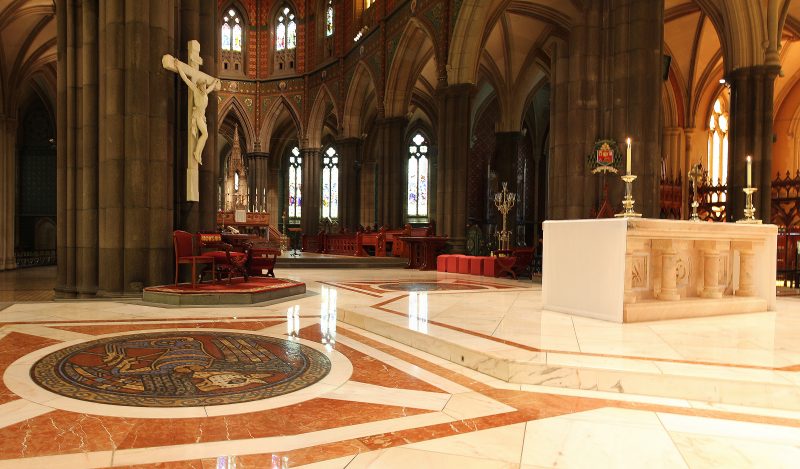 One name dominated Australian media in the last week of February 2019: Pell. This followed the lifting of a court suppression order about Cardinal George Pell’s conviction on five child sex offences and a pre-sentencing court hearing. The offences took place at Melbourne's St Patrick's cathedral in the late 1990s. He was sent to prison at the plea hearing.

Many Australians have been taking sides. Opinions seem to have fallen into three categories: those condemning Pell, those asserting his innocence, and those awaiting the result of the appeal process. As crime journalist John Silvester explained:

George Pell is a polarising figure, which is perhaps why there are now two warring camps – those who want him to be guilty of historical sex offences against two choirboys and those who don’t.

One commenter on a Reddit thread for the journalist's article suggested that Silvester may be in the pro-Pell group:

Given the number of times we've seen investigations buried by the Catholic faithful, I'd also appreciate knowing if the author of such a problematic article is a Catholic himself.

A number of prominent people have leapt to the cardinal’s defence, including two former Liberal Party Prime Ministers. John Howard gave a reference supporting Pell to the court hearing, writing “None of these matters alter my opinion of the Cardinal”. Overall the social media response was strident in its condemnation of the controversial former PM. This sarcastic tweet by Adam Gartrell, who works for the Labor Party opposition, echoed many others:

Oh he’s a “lively conversationalist”? Why didn’t you say so sooner, because that definitely cancels out the child rape. https://t.co/7ShUS7oYru

Another former Liberal PM, Tony Abbott, revealed that he had phoned his friend Pell the day the verdict was made public. Many cartoonists were not so forgiving:

There have been numerous attacks on the so-called #PellDefenders, often suggesting they have a common cause. Wendy Bacon, a journalist, activist and former academic, used Facebook to share her thoughts about those who are sticking up for him.

I am quite disgusted by the way the right-wing Catholic lobby are mobilising to defend a now convicted pedophile.

[…] I also wonder how many of the defenders are allies in causes like anti-abortion, anti-equal marriage and equal sexual rights – also I wonder how many are connected to Opus Dei in Australia, one of the groups that Pell helped prosper.

Opus Dei [Work of God] is a controversial, conservative Catholic organisation with which Pell has had links.

One survivor of sexual abuse was even stronger in her condemnation of the cardinal's supporters:

Almost immediately, the parade of aggrieved, disappointed, distressed, shocked, disbelieving, sad, angry Catholics and other Pell supporters began moving like a sullen, offended beast across the media, in unedifying protest at the guilty verdict.

But at last some of the truckload of mud thrown at him has stuck. It adds up to this: Pell, Australia’s most senior Catholic, has been made to pay for the sins of his church and a media campaign of vilification.

He is a scapegoat, not a child abuser.

Bolt copped considerable flak on social and other media. Sky News TV station even chose to run his Bolt Report segment on the cardinal without advertisements “to protect brands”.

Thank you Sleeping Giants ? for shining the light & encouraging companies to think about who they are advertising with.
Bolt was arrogant, but most people can agree his latests comments should be career ending.
No one should want to advertise or be on the Bolt report.

A number of longer reflections on the conviction and its aftermath soon appeared online. Patrick Marlborough remembered a victim of abuse by clergy:

Cardinal Pell has been convicted and everyone I want to call is dead.

Elation slid into rage. That instant of ‘we got him’ flashed and passed and made way for instants of ‘you bastards, you absolute bastards’ with electric ease.

Here was a man so cloaked in authority, sanctity, and righteousness for so long by so many that his abuses of power—his abuses of children—went unchecked, unmarked, and unmasked for half a century.

In total contrast, George Weigel, senior fellow of the Institute on Religion and Public Life in Washington D.C. and friend of Pell’s, is outraged by the ‘perverse verdict’:

If it is not reversed on appeal, that false verdict will constitute a new indictment: the indictment of a legal system that could not bring itself to render justice in the face of public hysteria, political vendetta, and media aggression.

In a disturbing indictment, Caitlin Johnston recounted the tragic life of her uncle (a rape victim whose case was allegedly covered up by Pell and those in power) in The Monster Pell Has Been Caged At Last:

The Catholic Church murdered my uncle, as surely as if they had tied the noose themselves. It was a long, drawn-out treacherous act and it took forty years to complete, but they did it. They snuffed out that beautiful spirit.

And all I can think about the Church right now is, “Burn it down.”

I have no faith in the Catholic Church.

And frankly I’m glad that so many of these perpetrators like George Pell believe in hell, because suffering for eternity seems about right to me.

Just when the stoush [brawl] seemed to be dying down a bit, senior defence counsel Robert Richter QC fanned the furore. In an extraordinary claim at the sentencing plea hearing, Richter referred to the case as “plain vanilla sexual penetration”. He apologised the next day but:

To little, to late. The damage is done! ?'Terrible choice of phrase': Robert Richter apologises for ‘plain vanilla’ comment https://t.co/bFXfNrdf9A

A seemingly trivial question on Twitter about what to call the prisoner brought a strong response. The thread, which can be accessed by clicking on the tweet, revealed the depth of feeling in the dozens of replies:

Can journos stop referring to Pell as “Cardinal” Pell. It’s long-standing accepted practise that convicted criminals are referred to by surname only, without honorific. I don’t see why this child abuser should get any special treatment.

Meanwhile, the Vatican has opened its own investigation into the charges against Pell. This may lead to his being defrocked [dismissed from the priesthood].

Finally, a word from a journalist who attended the trial, Emma Younger:

The analysis of George Pell’s conviction from so many who weren’t in the courtroom is interesting.

The victim’s evidence was given in closed court. It means only the 12 jurors heard the full case.

Personally, I think this one is best left to the Court of Appeal.

Doubtless, the appeal decision will generate as much heat as the guilty verdict.