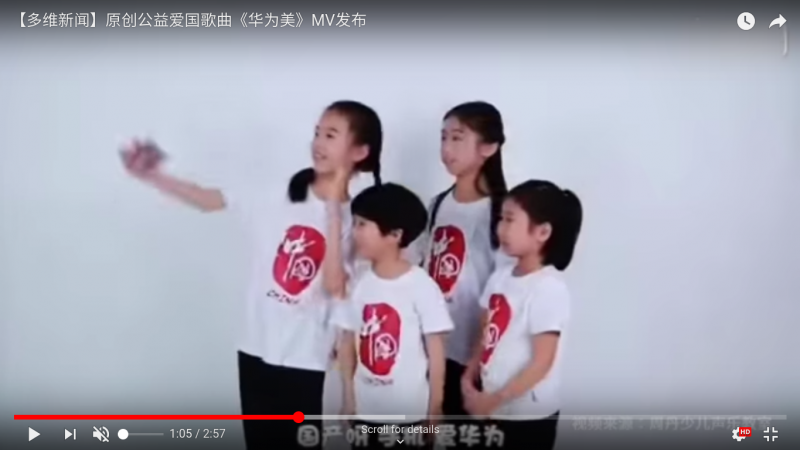 A patriotic propaganda video called “Huawei, the beautiful” has gone viral on the Chinese social media on February 27.

Sung by a group of cute kids wearing t-shirts stamped with the word “China”, the melody resembles the propaganda songs of the Cultural Revolution. The lyrics suggest the love of China and Huawei go hand-in-hand:

Which phone is the most beautiful in the world? Everyone says it’s Huawei.
The battery is durable, appearance is good. China’s chips are the most precious!
Huawei is good. Huawei is beautiful. Huawei gives me wisdom.
Teacher teaches me to love my motherland and homegrown brand Huawei.
Huawei wins glory for our country!

The video is the work of a group called the Zhoudan Children’s Singing Classroom (周丹少儿声乐教室), based on the southern Chinese city of Zhuhai. On its official Weibo account, Huawei has denied any involvement in the video's production.

Huawei has been trying to establish an independent outward image for the international market but has come under suspicion by Western governments of having close ties with the Chinese one-party state.

Indeed, every detail of the video suggests that it's a sophisticated piece of political propaganda. The lyrics were written by Li Yourong (李幼容), a prominent lyric writer of the CPC Central Military Commission Political Department Song and Dance Troupe, and Zang Sijia (臧思佳), a hired lyric writer of Police Literature And Arts Association of China.

The composer, Cheng Lengheng (郑冷横), has won many national awards for contributing to the country’s “spiritual civilization”, and he has been endorsed by the State Council for his outstanding performances.

The genre has reminded many people of the political propaganda tunes of the Cultural Revolution. @ZoologistPanghu remembered his childhood days:

A group of Chinese kids who are not mobile phone users singing praises for Huawei reminds me of myself when I was a 7-year-old singing “we are the hire of communism and have to eliminate the enemies”. We were so engaged in singing but we knew nothing about communism or who were the enemies. The lyrics is so straightforward with no rhetorical consideration – Huawei is good, Huawei is beautiful – this is a kind of aestheticism with Chinese characteristics. Isn't this a tribute to Stephen Chow's satirical drama – Shaolin Kungfu is good, yeh… really good, Shaoline Kungfu is awesome, really awesome?

Given its antiquated presentation, many have described the song as “gao ji-he”(高級黑), which suggests a mockery of Huawei’s connection to the Chinese Communist Party and the government. On the comment thread of Huawei's official Weibo's statement about the video, many users talked about the adverse effect:

Feel heartbroken for Huawei, it is hijacked and can't utter a word.

This is so touching and Huawei dare not touch it.

Praising to kill. I cried watching the video.

This is defamation, can sue them.

On Twitter, @legend500 noted how the video contradicts a claim by Huawei's own founder:

Huawei: We have no connection to the Chinese government. Also Huawei: the littlest children know we make Chinese chips the pearl of the world and advance the prestige of China globally! https://t.co/YztEpbIhRx

Despite Huawei's efforts to portray an image of autonomy, the Chinese government's retributive response to the arrest of Huawei's chief financial officer Meng Wanzhou in Canada seems to suggest otherwise. Meng, who is the daughter of the company's father Ren Zhengfei, was arrested reportedly suspected of trying to evade US trade curbs on Iran.

Likewise, the now-viral video hints at Huawei's ties with the single-party state just as Zhengfei tours the world stressing that the company’s equipment would not provide backdoor access to the Chinese government and it would not help China spy on the U.S.

Patriotism has been Huawei’s marketing strategy for years. On Zhihu, a popular question-and-answer platform, many discussion threads are tracking Huawei’s association with Chinese patriotism. One answer pointed out that a clear connection emerged around 2015 when Huawei was able to manufacture its own mobile phone chip. Since then, the company has become a symbol of China’s power in the technology sector, and there have been many articles on social media suggesting Huawei’s distinctive role in the rise of China. Such role is also endorsed by the Chinese government's plan to have locally made chips inside 40 per cent of all smartphones in the domestic market by 2025.