This Trinidad and Tobago steelband changed its tune, prompting discussion on a steelpan policy 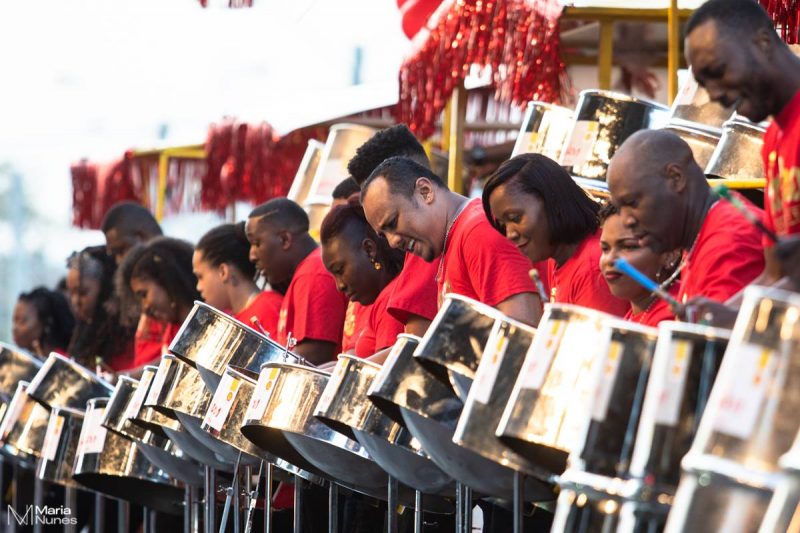 Invaders Steel Orchestra playing at the 2019 Panorama Semi-Finals at the Queen's Park Savannah in Port of Spain, Trinidad. Photo by Maria Nunes, used with permission.

The lifeblood of Trinidad and Tobago's annual Carnival celebrations is new music; it couldn't survive without it. Seasonal fetes blast the latest soca tunes to the delight of partygoers, but this music takes on new life and new forms during Panorama.

The hotly contested steelband competition sees arrangers take a soca song and build on it throughout the preliminaries, into the semi-finals and the grand finals. The contest involves traditional single steelpan players and conventional steelbands of various sizes.

After placing ninth out of the ten steelbands in the “large band” semi-finals, Exodus, a popular “pan side” hailing from east Trinidad, announced their intention to change their tune from “Rag Storm” to “Savannah Grass”, ostensibly because the latter might be better received at the finals.

The switch was not simple.

PanTrinbago, the association representing steelpan players’ interests, deemed the band should not be allowed to change their song even though the official rules don't bar it; they only stipulate that a band must not have played the same song at previous Panorama competitions.

Exodus felt so strongly about the swap that they went to court, where the judge ruled that if PanTrinbago wanted to amend the regulations, the membership should have been consulted.

At the Panorama finals on March 2, Exodus will play “Savannah Grass”, but the wrangling involved in making the change has many pan aficionados dismissing the whole imbroglio as semantics. They reason, no band ever plays exactly the same version of the tune they've selected all the way through Panorama; in fact, spectacular changes in arrangement have come to be expected and often weigh heavily into the scoring.

The blog Sokah2Soca simply couldn't understand what the outcry was about:

Exodus are putting themselves at a disadvantage by choosing a new song! Pelham [Goddard] has to arrange, the band has to learn and the drill master has to work the team to get the orchestration right with very limited time to get it done […] while […] the rest of the bands in the competition will simply be fine tuning their arrangements.

Discussion on social media also pointed to the role of the Panorama adjudication criteria and its dissonance with the pressure for bands to play popular songs. Some pan aficionados suggested that because the lion's share of new soca offerings are composed around a pre-existing beat and harmonic structure (called “riddims”), the result is musical homogeny, which can't always stand up to the rigorous demands of the judging criteria.

Yet, some arrangers — like Renegades‘ Duvone Stewart — have managed to take popular soca songs and expand upon them in complex and innovative ways:

Could a steelpan policy help? According to Michael Cooper, president of Panland, a Trinidad-based company that stakes its claim as the world's largest steelpan manufacturer and exporter, new policies can help navigate such paradigms. Steelpan was created in Trinidad and Tobago, but the country currently has no national policy on the instrument.

On February 20, Cooper gave a talk titled “A National Framework for the National Instrument” as part of a lecture series by the University of Trinidad and Tobago. He called Panorama the only annual event that has the power to cut across gender, age, race or class, and thinks its stakeholders need to “take responsibility” and develop a policy for pan.

Once Carnival is over, Cooper and a small group of volunteers that includes Patrice Cox-Neaves, an adjunct music lecturer at the University of the West Indies, have promised to come together and help develop the document, for which he already has a template.

Cox-Neaves believes that the situation with Exodus and the change of song is symptomatic of a lack of policy:

A pan policy would cover everything from history and education to manufacturing and marketing. Had PanTrinbago's board understood the history, they would know that Harmonites changed its tune midway through Panorama 1972. It's an option. Bands rarely take it up, because it's risky and a lot of extra work, but it is an option.

Panorama is a strange animal. Bands don't play covers. They use existing melodic lines of songs that have a set chord and harmonic structure and create an entirely new composition designed to suit the tech ability of a particular steelband.

I don’t think people really understand what happens in a panyard: you have section leaders, drill masters, an engine room, and the arranger pulls it all together. They transform a two-minute song into an eight-minute piece that is constantly evolving, dependent on both muscle memory and music memory.

Problems — even simple ones like a band wanting to change a tune — will resurface if we keep looking at pan as pure entertainment, and treating it as if it doesn’t speak to our soul. And that is all that it does. It feeds us.