Mexican women protest for their lives as kidnappings and femicides surge

On February 2, Mexican women flooded the streets of Mexico City and social media with chants and hashtags such as #VivasNosQueremos (we want ourselves alive), #NiUnaMás (not one woman more), and #NoEstamosSolas (we are not alone) to protest the staggering levels of violence against women in their country. An average of nine women were killed every day in Mexico in 2018, according to the National Commission of Human Rights.

Around 4000 people gathered at Monumento a la Madre and marched towards Zócalo in the capital Mexico City. The night before, hundreds of women joined bikes rides in thirteen different Mexican cities — with 200 cyclists in the capital alone — for the Rodada for Women's Lives and Freedom.

The demonstrations were called after an investigation by the newspaper El País revealed that 153 people, most of them women, have been kidnapped on Mexico City's subway system over the past four years. Protesters demand an end to femicides and that authorities implement adequate security measures for women on public transportation systems.

Global Voices contributor Jer Clarke was present on the February 2 protest in Mexico City and made this video:

A video tweeted by Ruido en la Red shows women chanting “not one more, no more women killed” during the bike ride:

Another protest is scheduled on International Women's Day on March 8.

“Today, it happened to me.”

The El País story about the kidnappings has made shock waves online since its publication in January 2019.

Testimonies reveal the various terrifying ways through which women can be kidnapped while on the subway — and how bystanders’ indifference end up helping attackers.

On Facebook, Eunice Alonso described her experience of barely escaping a kidnap attempt:

Pues ahora me tocó a mi.

Well, today it happened to me.

A moment ago I was in the metro station Boulevard puerto aéreo, I was waiting for my train and a young man of 20 to 25 stood really close to me. I felt he pushed something against my ribs […] Initially, I thought he was going to rob me, but then he said “you're coming out with me, you'll see a white van, you'll get in, and if someone says anything you say it's your Uber”. I froze and started having an anxiety attack. I started crying. Then, a lady (I couldn't get her name) asked me “are you OK?”, and when I couldn't answer she yelled “fire! fire!”. People started looking at us, then a policeman approched, and the man [that was holding me] fled.

The lady in this story used a strategy that is recommended by experts: to shout keywords such as “fire” or “earthquake” when asking for help to draw the attention of bystanders and security guards without exposing the attacker directly (as that could trigger a violent reaction on his part).

Data journalism group Serendipia DATA created a collaborative database to map incidents like the one above on Mexico state's metro stations.

Activists collected 210 accounts of kidnapping attempts in Mexico City and the Mexico State. You can explore [the testimonies in detail] on this map.

A similar effort was launched by online TV channel Rompe Viento based on the data collected individually by a Facebook user.

On February 1, Mexico City's authorities met with victims, their families, and civil society groups to jointly devise a plan to fight violence against women in public spaces.

Authorities proposed measures such as stationing mobile units of the Prosecutor's Office specifically to assist women who have been victims to gender-based violence while using public transport. Officials also promised to improve lightening around subway stations and to strengthen surveillance.

But many think those are insufficient. In Mexico, over 90 percent of crimes are not reported over lack of trust in authorities. A lot of victims fear retaliation, or that the authorities will cast doubt over their experience. 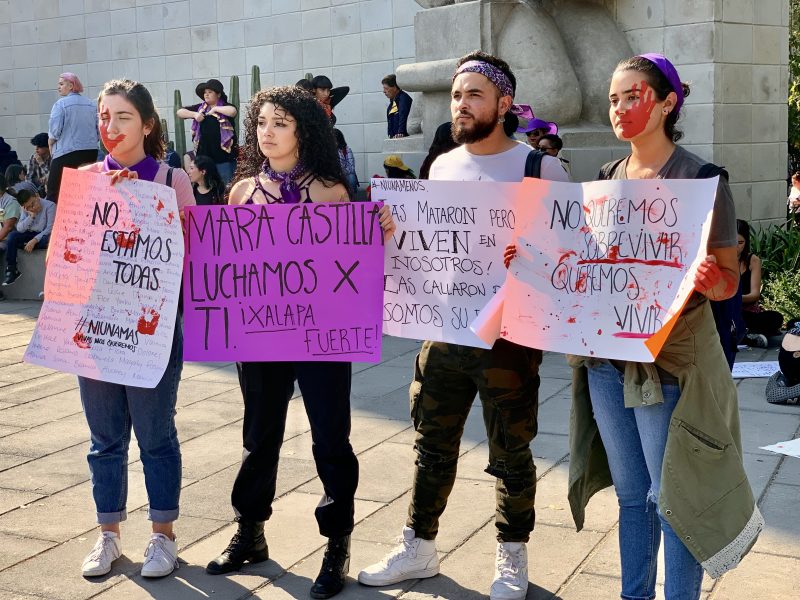 Protest on February 2 in Mexico City. Photo by Jer Clarke, used with permission.

Citizen pressure seems to have produced some results, at least: the number of complaints by women who were attacked on the public transportation system in the capital has soared. Thanks to this, authorities were able to outline a profile of the victims.