After an unarmed teen is killed at a supermarket, netizens share stories of growing up black in Brazil 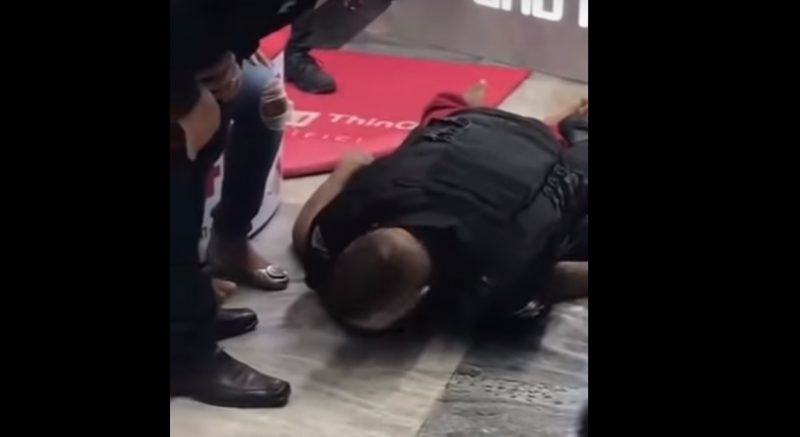 The security guard kept restraining Pedro even after he lost consciousness. Image Screenshot of video by unidentified author, widely broadcasted in Brazil. Uploaded by Poder360.

On the two-minute-long video widely shared online, it is possible to see 19-year-old Pedro Henrique Gonzaga face down on the floor of a supermarket store in Rio de Janeiro, Brazil, both hands lying motionless beside him while security guard Davi Amâncio lies on top of him, grabbing him by the neck.

A passer-by yells: “His hands are limp”; another one says: “He is unconscious”. But the guard refuses to let go. A man approaches whoever was shooting the scene and asks: “Why are you recording this? Are you from the police? You cannot shoot inside.” A woman shouts that Pedro didn't do anything, and the guard rebuffs her: “You are lying!”

It was a Thursday, February 14. Pedro was taken to a hospital and was pronounced dead by cardiac arrest less than an hour later.

The store's management released a note stating Pedro had tried to steal Amâncio gun. CCTV footage shows Pedro talking to him and falling to the ground twice before he was restrained.

Young black man is suffocated to death, by white security guards, from a supermarket in prime area of ​​Rio de Janeiro, Brazil. pic.twitter.com/vbh4BsC1zu

Amâncio was arrested on the spot, but was released on bail soon after. He hasn't yet been charged with a crime. The police chief who's investigating the case told the press that the Amâncio “overreacted in self-defense”.

Pedro’s relatives, who were at the store when he was killed, told the police they were on the way to take Pedro to a rehabilitation clinic for drug addiction and had stopped by to buy supplies.

The death of an unarmed young black man at the hands of a security officer has hit close to home for a lot of people in Brazil.

A third of the 60,000 homicides registered every year in the South American country are of black males below the age of 20. Every 23 minutes, a black man is killed. Many grow up accustomed to being mistaken for a criminal by the authorities or society at large.

Fioti, a famous rapper and entrepreneur in Brazil, remembered on Twitter the first time he was stopped by the cops:

The first time I was stopped and frisked I was 11 years old. Believe it or not, I was on my way to the mall, with my brother, we were going to the cinema. At the bus stop, in front of everyone, the police made us lift our shirts and pointed their guns at us. I thought I was going to die, this was just the first time.

Activist Rene Silva remembered past cases of murdered black children and teenagers who subsequently were portrayed as criminals on social media.

I don’t know if you guys remember, but when Eduardo died here at Complexo do Alemão [a slum in Rio de Janeiro], they have tried every possible way to incriminate that 10-year-old boy, who was playing with his cell phone at the doorstep of his house. A picture of a child carrying a gun even popped up and people said it was him.

[With] Maria Eduarda, who died INSIDE HER SCHOOL while at physical education class, people invented that she was riding motorcycles with guys holding shotguns. It’s always the same story. They try to incriminate us in every way.

Eduardo de Jesus, 10, was fatally shot in April 2015 by a police officer, who wasn't charged. Investigators concluded he acted in self-defense, reacting to gunfire coming from an unidentified shooter — which contradicts the accounts by eye-witnesses who say there was no gunfire.

Maria Eduarda da Conceição, 13, was killed by three gunshots in March 2017 at her schoolyard during a shootout between the police and drug gang members. A police officer was charged with murder.

On a Twitter thread, singer MC Carol recounted her early experiences of racism. After winning a contest at school, she was awarded the role of the “bride” at the nativity of Saint John, a traditional celebration in Brazil, but was rejected by her pair, a white boy who she says didn't want to dance with her. Carol said she grew up fearing white people.

This was one of my first contacts with racism. Actually, the first one was on THE FIRST DAY AT SCHOOL. On my first day, I was locked in the bathroom by a group of white girls! (I’ve posted about it before and I was questioned for remembering something that happened when I was so young, I must remember because it hurt a lot)

Writer Ale Santos, who became known on Twitter for his threads about Brazilian history, summed up what the murder of Pedro Gonzaga represents:

Brazilian racism is a perfect crime: it sets the conditions to spread violence and instead of healing society, it prefers to exterminate young people who match their racist description of what a criminal looks like. It’s a true genocide, as statistics show. #BlackLivesMatter

Three days after Pedro’s murder, protests erupted in five major cities around Brazil with the banner “vidas negras importam”, a direct translation in Portuguese of “black lives matter”, a movement born in the United States in 2014 that has gained traction in recent years in Brazil.

As a 19-year-old student Lyz Ramos told The Guardian: “We have to take a position against this to stay alive. It’s a basic issue.”