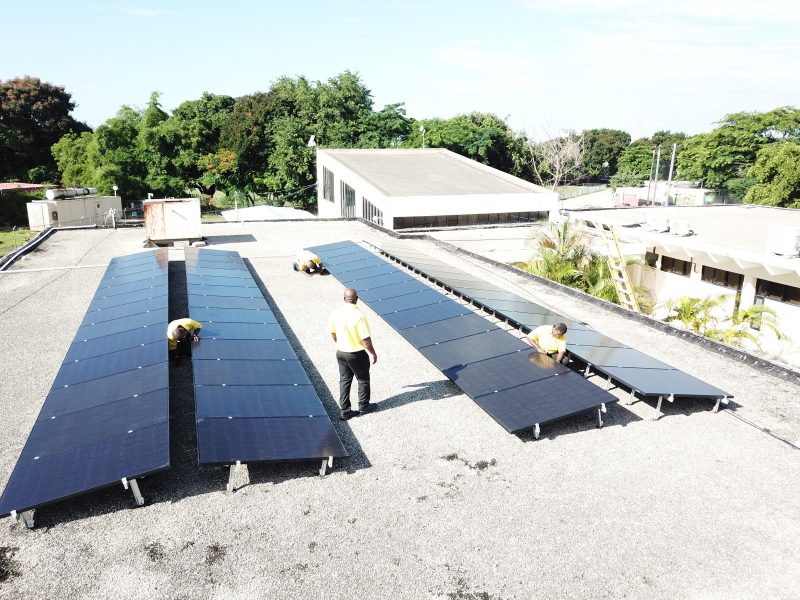 Installing solar panels on the roof of the Office of the Prime Minister in Jamaica as part of the global Solar Heads of State initiative. All photos in this post are courtesy James Ellsmoor, used with permission.

What does the future have in store for the islands of the world? James Ellsmoor, a 26-year-old Englishman who made Forbes magazine's list of 30 Under 30 in 2017, is a self-described “digital nomad” who believes in the viability of solar power to make a difference to island populations worldwide.

In the Caribbean, “sustainability” has become a catch-all expression encompassing critical areas of island economies, including environmental protection; disaster preparedness in the face of climate change; tourism; economic growth and jobs; agriculture and fisheries; and renewable energy. With respect to renewables, a Kingston-based think tank sums up the challenges:

Energy prices in the Caribbean are amongst the highest in the world, having a crippling effect on industry, businesses and households of the region. The energy economies of the Caribbean have particularities which make the Caribbean energy situation unique: high dependence on imported oil resources, relatively small markets, largely centralised energy production and distribution, outdated energy generation equipment and significant electricity theft in some countries, and a relative abundance of renewable energy resources.

Nevertheless, investment in renewable energy is growing, with Jamaica aiming to bring the largest solar power plant in the Caribbean to date on stream by mid-2019.

Global Voices recently caught up with Ellsmoor in Kingston, Jamaica, to find out what solar can bring to island life and what keeps him moving and dreaming about a better world. 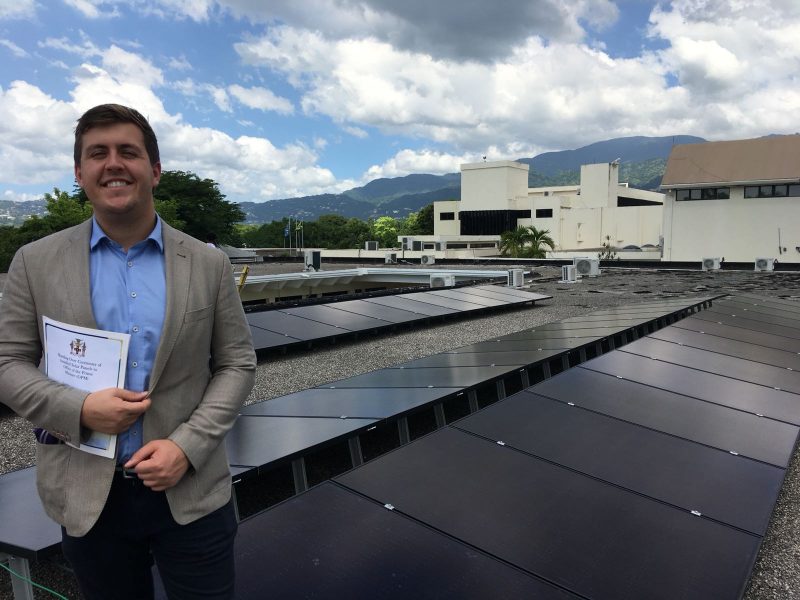 Global Voices (GV): Solar Head of State was an initiative to help world leaders become green leaders. How did it come about?

James Ellsmoor (JE): Solar Head of State started as a campaign by a group of California-based activists to ask [then United States] President Obama to install solar panels on [the roof of] the White House.

While this campaign was underway, President Mohamad Nasheed of the Maldives approached the group. He is a prominent climate activist who made global headlines by holding an underwater cabinet meeting to raise awareness of the threat posed to his country by rising sea levels. With Solar Head of State, he later became the first world leader to install solar panels on a government residence.

After I joined, we decided to take the campaign global, asking all world leaders to install solar panels on public buildings. Since then we partnered with governments to install solar on Saint Lucia’s Government House and Jamaica’s Office of the Prime Minister. We are now working on similar projects with the Organisation of Eastern Caribbean States and the Pacific Island Development Forum, which together make up over 20 small island developing states (SIDS). 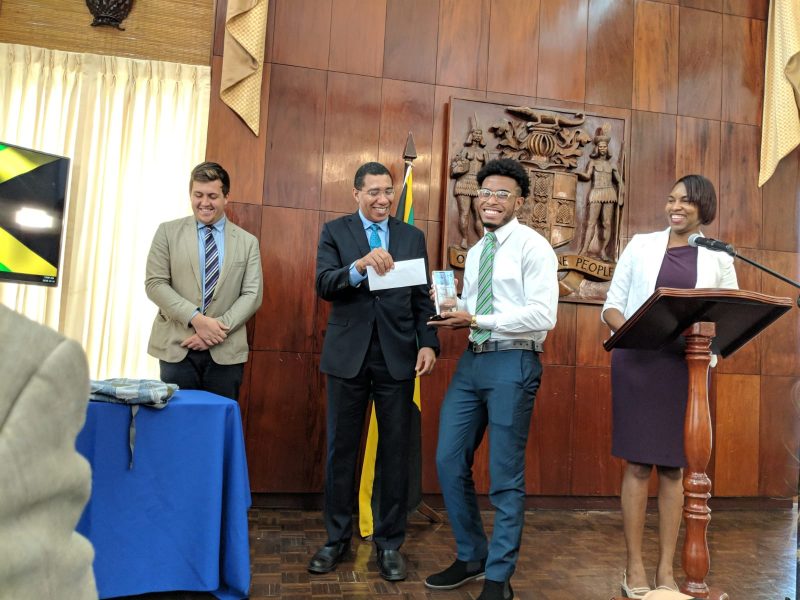 At the handing over ceremony of the solar panels on October 17, 2018, Jamaica Prime Minister Andrew Holness presents an award to Ryan Bent, who produced the winning video in the Jamaica Solar Challenge, while Tameka Lee of the Caribbean Climate Innovation Centre looks on.

GV: What has it been like promoting solar energy in the Caribbean?

We asked students to create a song, video, poster or something creative that would share the benefits of solar energy with their peers. We were so happy with the results and are excited to be launching similar competitions in Grenada, Guyana and Belize next year!

The winning video from Jamaica has an upbeat, dancehall feel:

GV: Do you feel the movement is gaining some traction? Do Caribbean citizens and politicians “get” renewables?

JE: The Caribbean is no different to other parts of the world. Most people do not think about where their electricity is being generated. The big difference is the phenomenal cost of electricity in the region — islanders pay three to six times more than U.S. customers per unit of electricity consumed. This makes the need all the more pressing and with the political turmoil in Venezuela, there is an economic and environmental imperative for the region to move away from fossil fuels. I think people are starting to wake up. Renewables make sense for their wallets as well as the climate. This is going to be what moves the needle.

We need greater collaboration [among] utilities, government, the private sector, academia and nonprofits. All these organisations are integral to the energy sector, but are still operating in silos. If the region is going to transition it will need cooperation!

We also need to move beyond the low hanging fruit of electricity generation and solar power. Shipping, transportation and waste management are huge sources of pollution that need greater attention. Moving towards batteries for renewables is great, but we also must ensure that there is a plan for batteries to be safely disposed of at the end of their life. 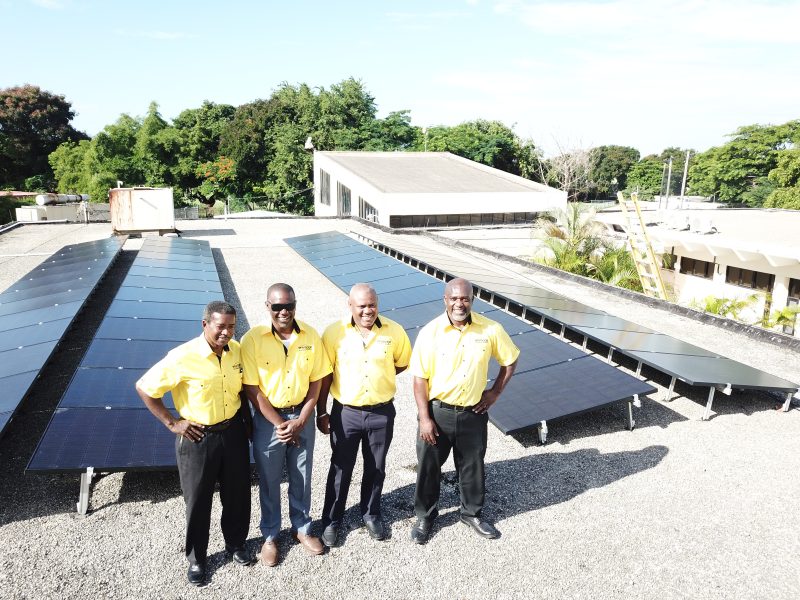 Members of the solar panel installation team on the roof of the Office of the Prime Minister in Jamaica.

GV: You recently graduated with a Master of Letters in Island Studies at the University of the Highlands and Islands, and you publish an online newsletter. What drives your fascination with islands?

JE: I am from a very rural part of England and so the relationship between communities and their natural environment has always interested me. The master's in island studies allowed me to explore the complexities of living in smaller, isolated communities and the differences needed in governance and business for these communities to prosper.

I started the Island Innovation newsletter because I wanted to disseminate all the information I was receiving about different island communities worldwide, to a wider audience.

GV: What do you think islands have in common, globally — if anything? Does every island have its own set of complexities?

JE: There are definite commonalities globally [among] island communities. Key issues such as energy, transportation, housing and climate change come up frequently.

There are obviously cultural and climatic differences. No two islands are the same … All too often, I see communities trying to reinvent the wheel when neighbouring islands have already found creative solutions to an issue. 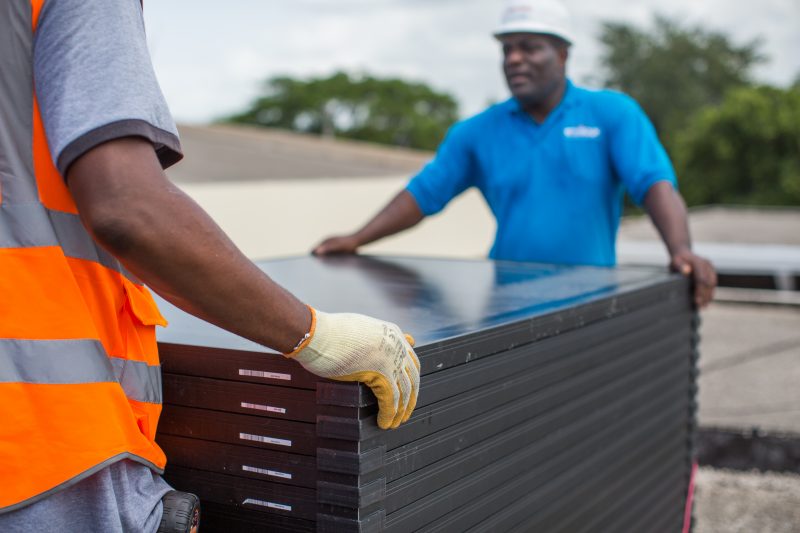 Moving the solar panels prior to setup.

GV: Do you have a favourite island?

JE: Now you are asking for trouble! I can’t have favourites working with so many different island communities. Each one has its ups and downs.

I have loved spending so much time in Jamaica and getting to know more about the culture and history. It has been a really special experience and I have been so impressed by the resilience, passion and entrepreneurship of the Jamaican people. The cultural output relative to the population of Jamaica never ceases to amaze me and it is remarkable the impact this island has had on the world.