Journalists, teachers, and activists targeted in attacks on free speech in the Philippines 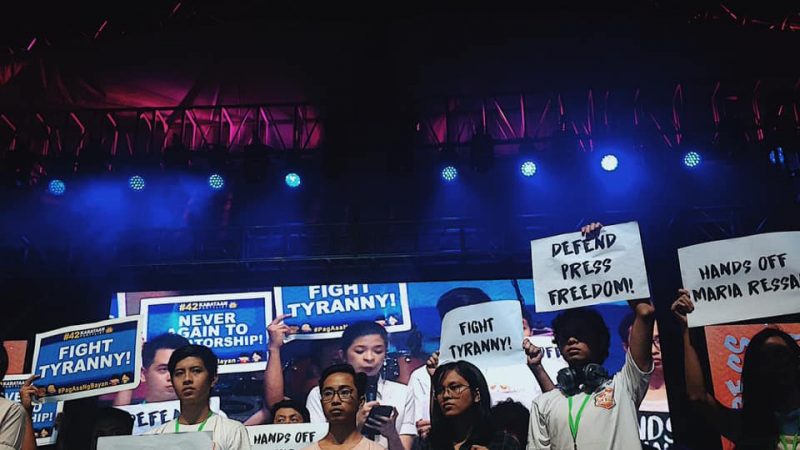 The recent arrest and detention of Philippine journalist Maria Ressa, CEO and executive editor of the news site Rappler, is just the tip of the iceberg of intensifying attacks on Philippine media.

As assaults on press freedom in the Philippines multiply, they come in various forms: red-baiting against members of media included in “military hit lists” of suspected communist rebels, distributed denial of service (DDoS) attacks on alternative media sites, and a systematic use of trolls and bots against government critics on social media.

Yet media is not the only target: teachers and activists also experience harassment in what they describe as a ‘constriction’ of freedom under the Duterte government.

A vocal critic of the government of President Rodrigo Duterte, Ressa was named a 2018 Person of the Year by TIME Magazine. The globally acclaimed investigative journalist was arrested on 13 February on charges of cyber libel, stemming from a Rappler 2012 story that linked businessman Wilfredo Keng to former Supreme Court Justice Renato Corona, who was impeached in 2012. The Rappler story cited news reports linking Keng to illegal drugs and human trafficking.

While Ressa was allowed to post a bail of PHP100,000 (US$1,917) on 14 February and is now free, press freedom advocates assert that the charges are politically motivated. The National Bureau of Investigation (NBI) had originally dismissed the charges against Ressa but subsequently retracted its decision, despite the fact that Ressa was not acting as Rappler editor when the article was published in May 2012. On top of this, the article in question was published four months before the Philippine Cyber Crime Prevention Act became effective.

The arrest warrant vs Maria Ressa is being served at the Rappler HQ now, an officer part of the serving party who introduced himself to be part of the NBI tried to prohibit me from taking videos — WHICH IS PART OF MY JOB pic.twitter.com/TElJzSjJer

In the past, media practitioners have been regularly red-tagged as members of the Communist Party of the Philippines (CPP) and its armed wing, the New People’s Army. This includes critical media organizations like the National Union of Journalists of the Philippines (NUJP), which has been accused of acting as a “CPP front” in spurious reports published in Manila-based tabloids.

Cong Corrales, an associate editor at the Cagayan De Oro City-based community paper Goldstar, has been included in a list of “communist terrorists”. The list, which also mentions some of his family members, is being widely circulated by suspected military agents. Unsurprisingly, this orchestrated witch-hunt coincides with the launching of Hustisya-Northern Mindanao, an organization defending the victims of Martial Law, which was imposed on Mindanao Island, the second largest island of the Philippines, in May 2017.

At the same time, alternative media sites Bulatlat, Kodao Productions, and Pinoy Weekly have been subjected to massive DDoS cyber-attacks since December 2018 that resulted in the repeated takedown of their websites from the internet. Most recently, Bulatlat and Kodao Productions, considered to be among the oldest alternative media organizations in the Philippines, have been specifically targeted, resulting in their shutdown on 25 January.

Bulatlat, an alternative online news magazine, is being subjected to a cyber attack as of the moment. IT experts looking into this said a “crazy amount” of attacks have been launched to bring down one of the country’s longest running news website.

The NUJP website also came under attack in early February, receiving a record 615 gigabytes of total bogus traffic. When Bulatlat sought the aid of Qurium Media Foundation, a Sweden-based secure hosting provider for threatened media, it noted that:

…the attackers used nearly 2,000 computers to saturate the website and make it unreachable. In another attack, they sent 3 million packets per second of bogus traffic.

Altermidya, an independent network of alternative media, has concluded that the cyber-attacks have the markings of systematic and well-funded machinery:

Clearly, this is not just the handiwork of a hacker acting alone. Several international studies, including one from the University of Oxford, revealed how government is funding cyber-attackers to manipulate public opinion over the internet. We believe that there is no one else that could possibly be behind these attacks than the Duterte administration itself, which has taken increasingly bold steps to curtail press freedom and the people’s right to know.

The attacks are an affront against the ordinary people whose perspectives define the stories of the alternative media. These are attempts by those in power to drown out the voice of the marginalized and the oppressed, displaying Duterte’s fear of committed journalism that seeks to inform, educate and guide the public in decision-making.

Anyone publicly criticizing Duterte's policies such as the violent anti-drug campaign, or the imposed military rule over Mindanao is subject to surveillance, intimidation, and threats. This is particularly true of one group: members of the teachers’ union, who have become targets of profiling at the behest of the Philippine National Police and the Department of the Interior and Local Government. Fortunately, one umbrella organization, the Alliance of Concerned Teachers is openly denouncing such violation of freedom of expression:

LOOK: Alliance of Concerned Teachers conducted a protest action at Camp Crame, Quezon City to condemn the profiling or inventory by the PNP of its member-teachers.

Another group the authorities are eager to watch closely are the students. This week, the government's National Youth Commission has publicly requested that President Duterte revoke the scholarship of students who join “anti-government protests”.

Police are constricting the flow of people to the EDSA anniv[ersary] commemoration mob — ironically on the day we are cherishing the democratic right to assemble and protest. Takot sila sa bagong [Are they afraid of a new] EDSA [uprising]! pic.twitter.com/vYUG2EZs7y

Police are constricting the flow of people to the EDSA anniv commemoration mob — ironically on the day we are cherishing the democratic right to assemble and protest. They are afraid of the new EDSA!

But Filipinos are not taking the constriction of their democratic space lightly. Thousands of ordinary people, rights advocates, and activist groups came together at the EDSA shrine on 23 February to oppose what they say is the increasingly dictatorial regime of President Duterte. This outspoken expression of frustration comes at a particularly sensitive time: February 25 marks the anniversary of the popular uprising that overthrew late dictator Ferdinand Marcos in 1986.