Tension between India and Pakistan mounts after terror attack in Kashmir 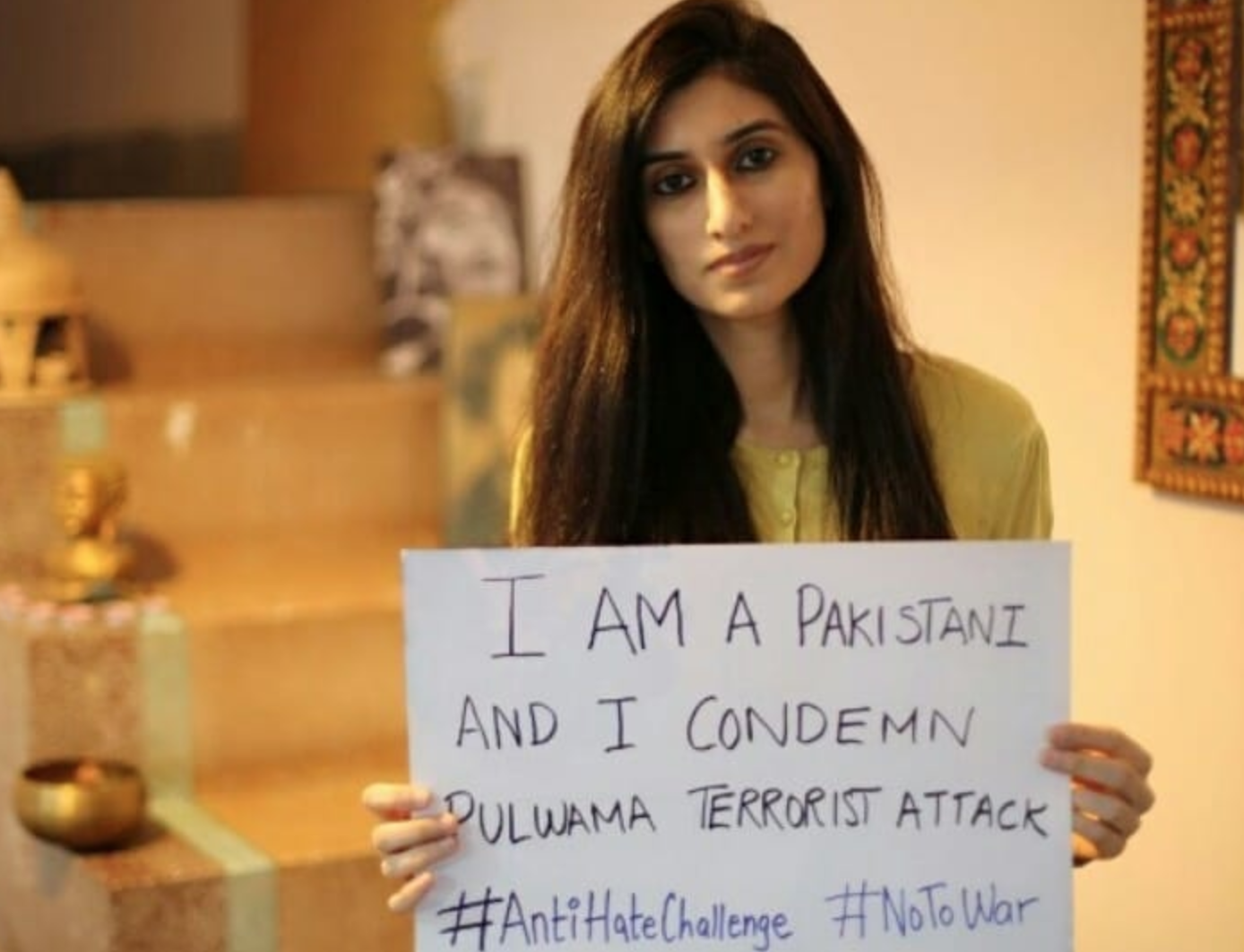 Widely used image of Pakistani social worker and journalist Sehyr Mirza, who launched the #AntiHateChallenge on social media. Via her Facebook page.

The tension between India and Pakistan has heightened in the past week after a terror attack in Kashmir which killed more than 46 Indian soldiers.

Last week, India's foreign ministry claimed that Pakistan had offered JeM leader Masood Azhar ‘full freedom to operate and expand his terror infrastructure in territories under the control of Pakistan and to carry out attacks in India and elsewhere with impunity”.

Soon after the attack, Pakistani actors were banned from working in the Indian film Industry. The Indian government has also withdrawn trade privileges for Pakistan while blocking cross-border services.

India's Prime Minister Narendra Modi, who belongs to the right-wing Bharatiya Janata Party (BJP) vowed to ‘give a befitting reply’ and blamed Pakistan:

The dastardly attack in Pulwama has anguished the nation.

Yes, this is a time of great sadness.

But, I assure every family that a befitting reply will be given! pic.twitter.com/k9eSlfAePf

He even promised to isolate Pakistan internationally for supporting the militant groups.

In an emergency cabinet meeting, Modi said India's security forces had been given a free hand to deal with terrorists further adding, the “blood of the people is boiling”.

“I want to tell the terrorist groups and their masters that they have committed a big mistake. They have to pay a heavy price.”  — Narendra Modi

But Pakistan rejected these claims and brought the Kashmir issue and human rights abuses to the forefront:

In her meeting with Ambassadors from #EU FS Tehmina Janjua underscored Pakistan's position on #PulwamaAttack. She categorically rejected Indian government's remarks of Pakistan's involvement in the attack(1/2) pic.twitter.com/ilVnpNPY8b

In a rebuttal, Pakistan Prime Minister Imran Khan denied these claims and warned his neighbor that a response would be imminent if attacked — something which would lead to an all-out war between the nuclear-armed rivals.

Citizens’ respond to the escalations

In India, while the political class including Indian National Congress (INC) Rahul Gandhi backed the government in responding to the terror attack without offering many nuances, citizens rallied, protested and are crowdfunding on social media to help family members affected by the attack.

Indian actor Akshay Kumar and business leader Anand Mahindra tweeted a link to a donation drive to help the families of armed soldiers who perished in the attack:

#Pulwama is something we cannot & will not forget.We’re all angry & it’s time to act. So act now,donate to the martyrs of Pulwama on https://t.co/5j0vxsSt7f There’s no better way to pay homage to them & show your support.This is the only official site,pls don’t fall prey to fakes pic.twitter.com/sYruUtzgKY

Why are Indian Actors’ based TV Commercials still running in Pakistan ?

Peace is a 2 way street.

Neither ?? nor ?? can afford a war. Neither does ?? have a valid reason to start one! Please use this hysteria driven time to see how nationalism often brings the worst out of people! #Pulwama #Kashmir

Getting kicked in the back, getting slapped and abused by kids & youth — India has surely "won" the war of hearts and minds in Kashmir…
The 'mighty" army is being utterly disgraced in their attempt to hold on to a population which will go to any extreme for freedom.#Pulwama pic.twitter.com/G4lofvoix4

Kashmiri Student leader Rashid also spoke about the ignominy of everyday violence as numerous reports of violence against Kashmiris across India were reported in the local media:

Brilliant piece of investigative reportage by Yashraj Sharma who documents step by step how the Dehradun attacks on Kashmiri students were planned and executed over FB & Whatsapp.https://t.co/NBDOZGfVa3#SOSKashmir #UnHateNow #SafeHaven #KashmirDistressAlert #HateKiNoEntry

Amidst all the provocations in India, some citizens are also calling to restrain from jingoism. Samir Bhatia tweeted:

Disrespecting a country's flag is just insulting and despicable. Imagine deriving pleasure from such obscene display of jingoism. https://t.co/igxt9DgSGp

Even #Pakistan has faced terror attacks in the past.Lost their loved ones.The point is we can't blame the whole Pakistan and target even the innocent citizens for the tragic #PulwamaAttack and this is what many journalists are talking about.
HATE begets HATE!#AntiHateChallenge pic.twitter.com/Okn7H2bqE2

Many Pakistanis were also seen condemning the Pulwama violence in social media:

‘Whether blood be ours or theirs, Its the blood of humankind. Whether wars be waged in the east or west, It is the murder of world-peace. War is a problem itself. How will war resolve problems?’ – Sahir Ludhianvi #AntiHateChallenge #NoToWar #CondemnPulwamaAttack pic.twitter.com/dmK2oZWjvZ

Indian actor Swara Bhaskar responded to all the images and said:

Thank you friends from #Pakistan for this message of condolence and peace. Laudable initiative by young Pakistanis. We hear you! ????❤️❤️ #Pulwama pic.twitter.com/pJIZKI2c5O

These Pakistani ladies have marched forward with placards in hand to declare that their hearts bleed for the martyrs of India.
Ma'ams, humanity is alive in Pakistan because of people like you. You have a spine and most importantly, A HEART.#AntiHateChallenge #PalwamaAttack pic.twitter.com/k126qPOwM4

The terror attack, when looked through Kashmir's brutal occupation presents a complex view of Indo-Pakistan relationship and the tragedies faced by Kashmiris including rapes, enforced disappearances, the Kunan-Poshpora gang rape, pellet gun violence and many other documented struggles as reported by Global Voices.

Read: The Kashmiri People Versus the Indian State

Militancy, once prominent in the 1990s in Kashmir, has spiked again since 2016 after Indian security forces killed Burhan Wani, a local militant who was revered as a freedom fighter by locals in Kashmir.

Pulwama Responses like cutting off cultural exchanges and delisting Pakistani songs will not help change the mood of anger in Kashmir nor give any talks a chance: Indian T-Series unlists new Atif Aslam song from YouTube post warning by Raj Thackeray's MNS https://t.co/V1aIKlsXnC

India-Pakistan tension for whose benefit?

The Pakistan government has described the reaction from the Indian government and several Indian media outlets as irresponsible, baseless and immature, and an attempt to twist the upcoming polls in India for political gains. With the general elections just around the corner, this gives the opportunity to India's Modi to galvanize the Pulwama attacks like he did the 2002 riots in Gujarat that claimed hundreds of lives. This augurs well for the government which was staring ahead at a divisive election amid falling employment numbers and a resurgent opposition that has silenced itself after the Pulwama attacks.

Modi has followed a single-track policy of repression without dialogue. As a result, from believing that peace was only an arms length away, Kashmiris have crashed into an endless night of violence with no dawn at its end. That is the seed from which suicide bombing has been reborn.

However, amidst the political upheaval, some are urging the public to remember that when there is violence — everyone suffers:

Left India
Right Pakistan
The Pain is same! Nothing vl b achieved by going into a war excpt fr more & more loss on bth sides. Negotiations can solve all the problems. Don't let more Men in Uniform die. They have a family too.#India #Pakistan #Peace #PulwamaAttack pic.twitter.com/2fI3rxXtjj