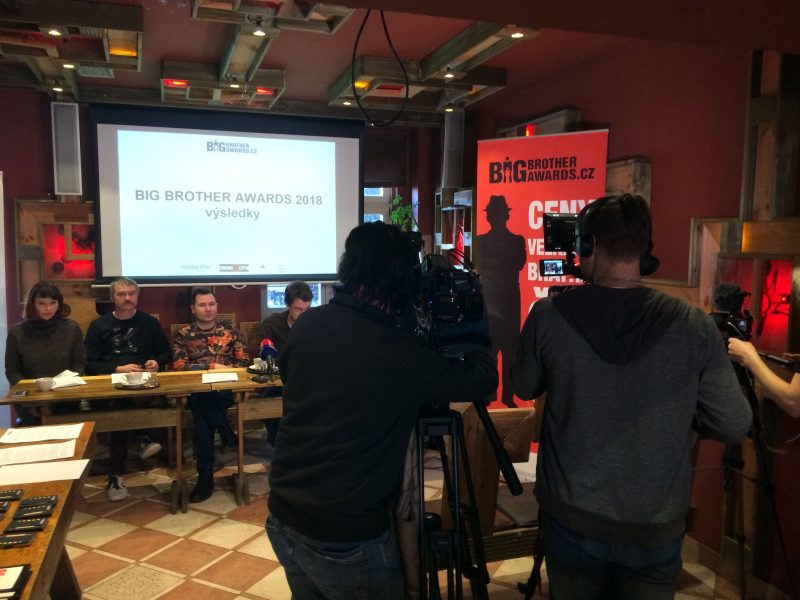 The Czech Republic Big Brother Awards ceremony in the  Cross Club in Prague on 14 February 2019. Photo by Iuridicum Remedium (IuRe), CC BY 4.0.

What do two Czech state entities, one Silicon Valley giant and one vacuum cleaner have in common? They were all winners in this year's Big Brother Awards in Czech Republic, an “anti-awards” ceremony designed to shame those who violate people's rights to privacy and data protection.

A jury of nine technology experts, lawyers and journalists determined the worst intruders based on suggestions made by the general public. At a February 14 ceremony in Prague, four anti-awards were handed to Facebook, the Financial Administration of the Czech Republic, the iRobot company and the surveillance camera-loving politician Petr Stuchlík. The only positive award, named after Edward Snowden, was given to BEUC, the European Consumer Organisation.

The tradition of Big Brother Awards was started by UK human rights organization Privacy International in 1998. In the Czech Republic, the NGO Iuridicum Remedium (IuRe) has been organizing them annually since 2005. Both organizations are members of the regional digital rights association European Digital Rights (EDRi). 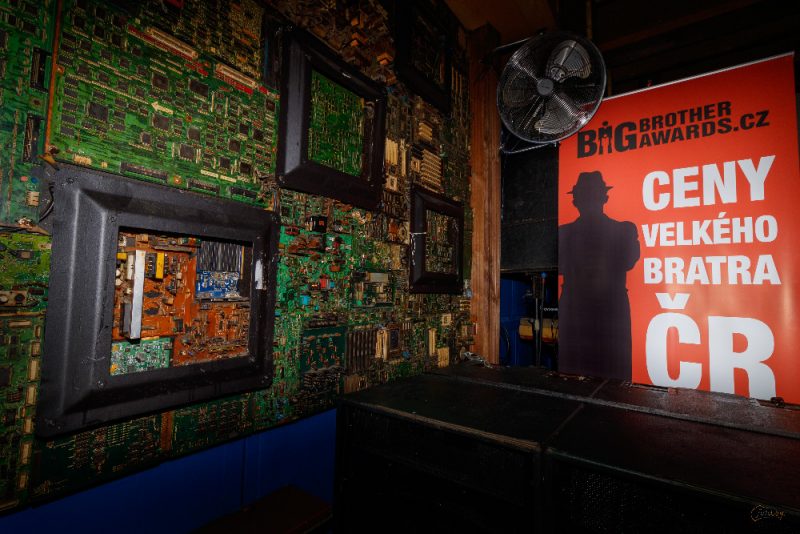 We have been awarding prizes for the fourteenth time. Our goal is to alert the general public to individual cases of privacy, but also to trends and new ways of spying in our privacy such as products of Internet of Things in our households. Awarding prizes in many cases has been the beginning of improvements in the specific issues that we have succeeded in.

The jury gave Facebook the distinction of “Biggest Privacy Intruder in the Long Term Perspective” for what they described as “an invasive and continuously irresponsible approach to private data of its users as well as others.”

This was the second Big Brother award that Facebook has won in Czech Republic, the first dating back to 2009. The jury decided in Facebook's favor based on a series of scandals such as the Cambridge Analytica affair, security gaps enabling unauthorized access to tens of millions of accounts, unethical conduct when monitoring mobile phones used by children, and “illegal and unethical practices related to personal data of Facebook users as well as others who try to avoid this social network.”

The “Biggest Administrative Privacy Intruder” award went to the Financial Administration of the Czech Republic, due to its custom of asking newlyweds for details regarding their wedding receptions.

Controversial random checks requesting information regarding wedding receptions such as costs, number of guests, location and accommodation details has been linked connected to a new e-sales system aimed at fighting tax evasion.

Vobořil described the dangers from this practice as follows:

It is like a fishing method, in which you throw a net and wait to see who gets caught in it. At that rate the administration could soon demand any kind of information from anyone.

While some tax law experts disputed whether financial authorities were entitled to make such a request, the General Financial Directorate and the minister of finance defended the practice.

A spying appliance and a peeping politician

The award for “Data Intruder Among Companies” went to iROBOT company, for the robot vacuum cleaner Roomba. The most recent model of this home appliance can collect data on rooms wherever it is used. It can also capture photos of the room, as stated in corporate privacy disclosures. The company combines this data with other information on customers’ lifestyles, and shares it with other companies for marketing purposes.

Jury member Adam Ondráček noted that “collection of personal data should be redeemed by improving service for users.” iROBOT representative Zdeňka Zlatušková responded that they don't sell or abuse the data their vacuum cleaners collect. She  added that they “do not share any data with third parties without customer awareness or control.”

Politican Petr Stuchlík, a former candidate for mayor of Prague from the centrist and populist ANO party, claimed the Big Brother Quote Award for endorsing the deployment of security cameras in Prague schools:

“I cannot imagine why schools should not agree with our proposal,” he said, commenting on a proposal put forth by ANO. “This will do no harm. It is always better to stay on the safe side…”

Some schools publicly refused the idea as an affront to the privacy of teachers, students and their parents. 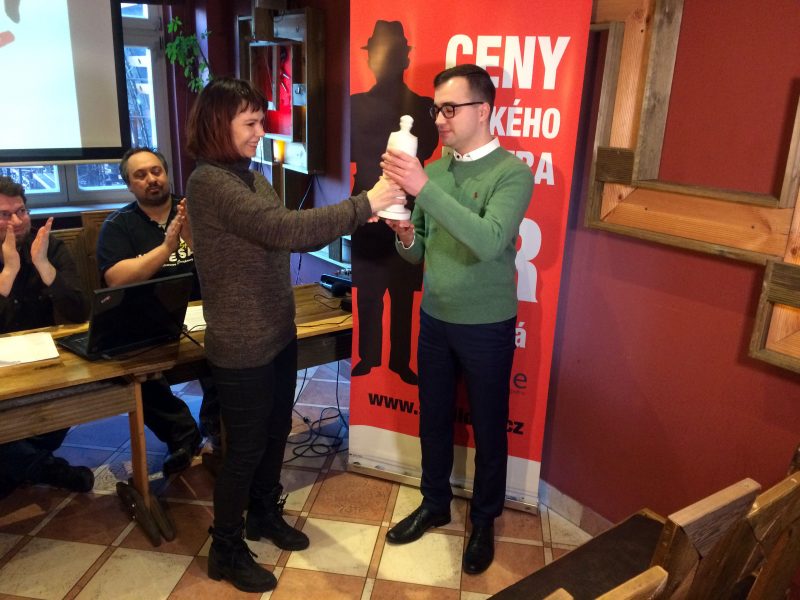 The positive Big Brother Award for 2018 was given to BEUC and its Czech member dTest. Photo by Iuridicum Remedium CC-BY 4.0.

The jury appreciated the fast and coordinated action by seven BEUC members taken in reaction to the findings of the study “Every Step You Take” by the Norwegian BEUC member Forbrukerrådet. It pointed to specific practices that the company uses – contrary to Google´s GDPR policy – to manipulate users in order to access their mobile phone location data. BEUC  announced:

We are honoured with the recognition of our work. Our thanks go to our member organisations who have filed the complaint with their local data protection authorities 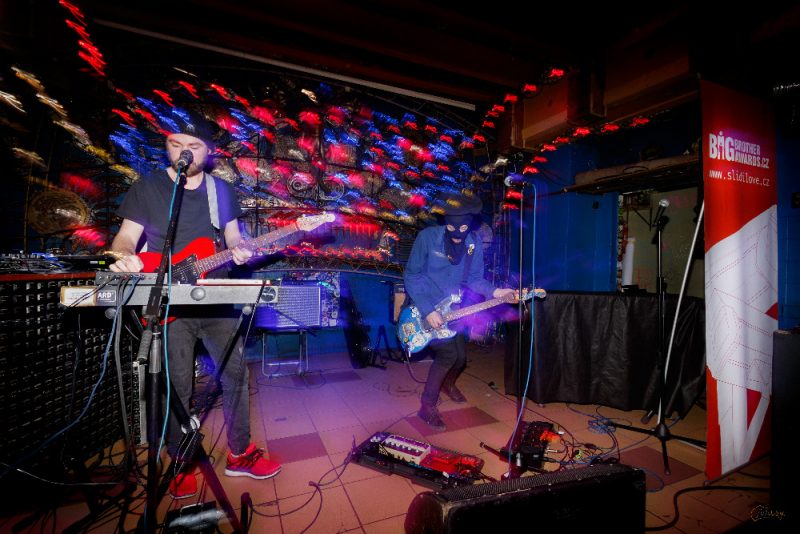 The BBA after party at the Cross Club in Prague included a performance by Kittchen and AidKid. Photo by Milan Sanda, fotolajk.cz, CC BY.

Organizers of the Czech Big Brother Awards stressed that “the criticized practice of unethical or even illegal methods when obtaining consent to the processing of personal data is, unfortunately, a widespread phenomenon, especially in the digital environment.”