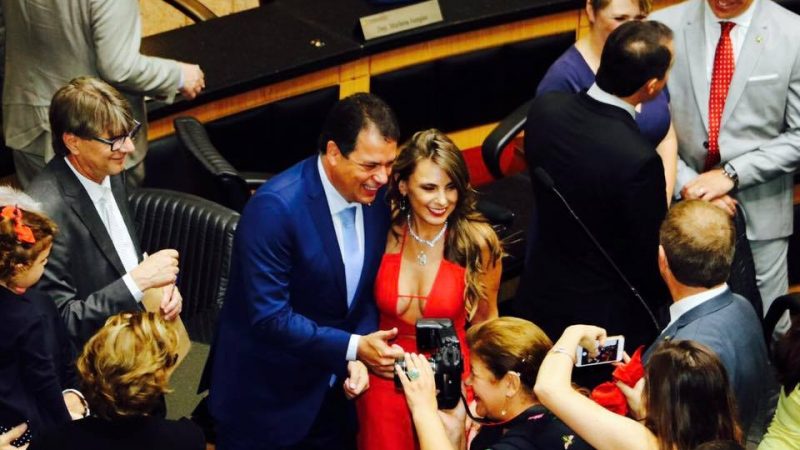 A photo of the deputy Ana Paula on the first day in office. Source: Facebook Personal Page, fair use.

For her state legislature inauguration on January 31, newly-elected Brazilian deputy Ana Paula da Silva wore a bright red dress and jewelry. She posted a photo of the occasion on her Facebook and, on the next day, she woke up with a flurry of hateful comments. The reason: her cleavage.

Ana Paula da Silva is one of the five women out of 40 legislators elected to the legislative assembly of Santa Catarina, a southern Brazilian state.

Her photo received 6,400 comments and 6,447 shares, including many offenses and threats.

In 2009, Porto Alegre city councilor Fernanda Melchionna took to the house's tribune wearing a black-and-white striped tie to protest a bill that would impose a dress code on female legislators.

Melchionna, who is now a state deputy, usually goes to work wearing jeans and trainers, which a male colleague thought was inappropriate.

She said that the debate around women's wardrobes was fit for “the lazy, for those who do not use their mandates to work on social problems.”

It is not only in politics that women go through such experiences. In 2017, lawyer Pamela Helena de Oliveira Amaral vowed to sue a judge after he interrupted a trial to scold her choice of clothing. Pamela was wearing a long blue dress that revealed her shoulders. Judge Eugênio Cesário left the room and only came back after Pamela had borrowed a blazer from a female colleague.

Pamela said in an interview at that time:

I was astonished, confused. I still haven't quite comprehended it all. It was humiliating, embarassing and disturbing what he made me go through in front of my colleagues. The room was full of students and other lawyers.

[…] the number of powerful women is increasing, but being a woman in politics is still tough. The clothes they choose constitute a weapon to establish their authority in this man’s world. In politics, there is no pre-set dress-code but an unspoken rule that men should wear a suit, and women should have a decent outfit. Those who cross the fine line between what is judged decent, and what is not, are at risk of being blamed because of their attire.

The length of the neckline

Ana Paula received 51,739 votes, making her the fifth most voted legislator in her state.

In an interview for Universa, a local website that covers women's issues, she commented on the attacks: “The participation of women in society is so tiny that a neckline can become a huge issue,” she said.

She also posted a video on her Facebook page responding to the offenses. The comments on that video, however, were also packed with insults. A user named Vitor said:

With all due respect, but have you forgotten in what environment you will work in the next few days? Formality, please. Be respectful! Parliamentary decorum.

Another user, a woman named Yelena Sier, received 252 replies to her comment in which she criticized the politician:

People do not understand!! No one goes to a hospital wearing a bikini, children do not go to school in pajamas, men do not go to buy bread in their underwear, no one has surgery wearing whatever clothes, no one goes to sweet fifiteen parties or a wedding in their pajamas, etc. … every occasion requires an appropriate attire, in companies there are uniforms and so on, and everyone knows that. The issue here is not about what a woman wears or doesn't wear, but that each place has an appropriate attire.

On a different post, Rosimere Furtado defended Ana Paula's right to dresses as she chooses:

Congratulations for raising this issue! While a state representative in a highly-respectful dress persecutes educators and states that education does not need financial investment, you have started a discussion about the importance of women in politics, about femicide, about causes that are independent of color or attire. In a “world” where the mind is misrepresented and sexuality is exarcebated, any cleavage is a subject of war!!!

Ana Paula fired back at her attackers by reminding them of her curriculum: before she was elected to the state assembly, she had been twice elected mayor of the city of Bombinhas and left office with a 90 percent approval rate.

Ana Paula also posted on Facebook an interview in which she said: “Women are in politics and society has to get used to them as they are. There are much more important issues for the legislative assembly to discuss.”

She also documented the attacks and said that she would sue the people who have harassed her. She told another interviewer:

I will continue to wear whatever I want. I do not intend to abuse myself in order to please others.