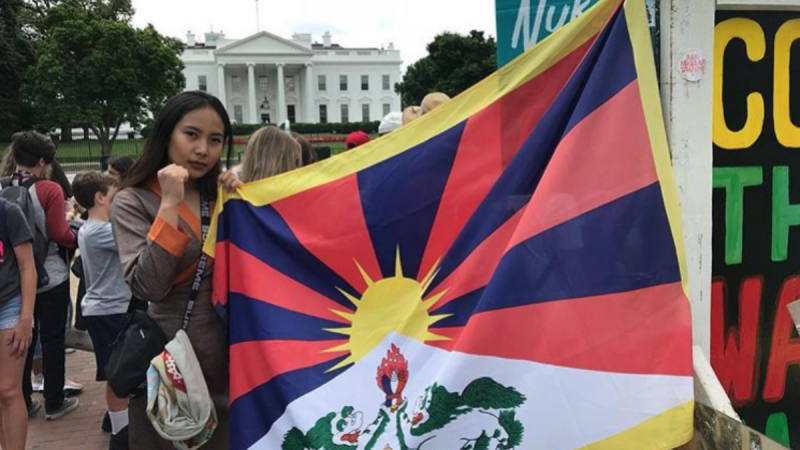 Image from Chemi Lhamo Instagram via The Stand News.

This article was originally written by Leung Hoi Ching and published [1] in Chinese on Hong Kong based citizen media, the Stand News on February 15, 2018. The following trimmed English version is translated by Zhao Yunlin.

On February 9, students at the University of Toronto's Scarborough Campus elected Chemi Lhamo, a 22-year-old student of Tibetan origin, as their student council president.

Just days after the election results were announced, thousands of mainland Chinese overseas students signed an online petition of protest [2], accusing Lhamo of having close associations with pro-Tibet independence organizations. They demanded the school disqualify her from the elected position.

Lhamo’s personal social account was flooded with demeaning comments and veiled threats of violence from overseas students who appeared to be from mainland China. As her story began to make headlines in international media outlets, students from Hong Kong and Taiwan fired back in defense Lhamo's defense.

In a phone interview with Stand News, Chemi Lhamo said she believed that the incident was mobilized by organizations associated with Chinese government, an accusation that Chinese officials have denied. [3]

Before this election, I had already been elected as vice-president of the student council for eight whole months and nothing ever happened. However, after all these sudden events, you cannot help but think that there is an organization manipulating these events behind the scenes. It’s really funny how I’ve been serving as a vice-president for so long, how I’ve organized many events and never held back from expressing my ideals, but nobody has ever asked me about my political opinions.

She also said that her fellow students from mainland China began to behave strangely. One of Lhamo’s classmates from mainland China spontaneously asked her, via mobile message, to draft a statement regarding Tibetan independence. She also received phone calls playing “red songs” (propaganda songs praising the Chinese Communist Party). Lhamo could not understand these songs, as she does not speak Mandarin Chinese.

Alongside the joint attacks and the comments on the internet, a group of students went to the student council office to demand that the election results be reconsidered. The campus student council has now temporarily closed its conference room, for safety reasons.

Chemi Lhamo has been a student activist for some years. She is an active member of the Tibetan community in Toronto and once joined a protest outside the university's Confucius Institute, the local branch of a global network of Chinese cultural institutions that are sponsored by the Chinese government and intended to promote China's soft power overseas. In recent years, she has also exchanged views with social activists from Hong Kong and Taiwan on topics related to freedom of speech, self-determination, democracy and related topics at public events.

Lhamo has never been afraid to speak up or show her Tibetan identity – she wears a Chuba, the traditional Tibetan dress, every Wednesday. Until the election, she had never perceived any animosity from her Chinese classmates. This is what led her to worry that this barrage of harassment was instigated by Chinese authorities.

Before immigrating to Canada at 11 years of age, Chemi Lhamo was a stateless refugee residing in India. Her grandparents were forced into exile along with the Dalai Lama in 1959. Within these rigid borders, no matter where she and her family went, they were looked down upon.

Every time someone asks me: ‘Where are you from?’ I always end up struggling to answer – I sometimes say that I’m from India, but I was denied citizenship status there; sometimes I say that I’m from Tibet, but when they ask me how Tibet is like, I really don’t know how to answer, because the Chinese embassy won’t even issue me a visa to go to Tibet. But it’s this experience of being viewed as an outsider that has made me understand my people’s culture better: the Tibetan culture.

Lhamo recounted that when she had just immigrated to Canada, a new kid from Tibet unexpectedly came to class. She was excited and happy to have found someone from her own land to become friends with, and she knew that he could speak the Tibetan language. However, frowning at her, he told her: “How about we don’t speak Tibetan? I can speak English.”

I don’t know if he was either ashamed or had some kind of guilt. I really don’t know. But it was then when I realized that some young Tibetans don’t want to speak their own language as if they were being pressured to speak another language.

At the time, Lhamo was only 12 years old. Feeling insecure about her identity, she convinced her parents to move back to a neighborhood with a Tibetan community. From then on, she learned more about Tibetan language, culture and Buddhism and became an activist.

Tibetan values, such as be considerate, be respectful to the elderly, ignorance as the root for negativity and etc., has give me a lot of strength. And the more I understand my culture, the more confident I feel.

This strength and confidence, she says, has enabled her to speak up as an immigrant and a Tibetan:

Being an immigrant is very difficult, but this struggle is what makes me who I am. Today, I speak about the Tibetan people loud and clear with pride thanks to the strength that my identity as a Tibetan gives me.

For Lhamo, the ideal world is one without borders or boundaries — Tibetan independence and autonomy is not the real issue at stake.

My vision for Tibet is the same vision that I have for the whole world: I wish for Tibetan people to enjoy the same rights as Canadians, namely freedom to express themselves, freedom of belief, freedom to avoid political oppression.

Many people in Hong Kong believe that China has become more authoritarian in recent years, adopting a more heavy-handed policy towards political dissidents and ethnic minorities. Even in Hong Kong, the space for freedom of speech and association has diminished [4].

Chemi Lhamo is familiar with the political challenges faced in Hong Kong after the 2014 Umbrella movement [5] but she shared her optimism with Hong Kong people and urged them not to give up:

I learned a concept from the Tibetan culture known as impermanence: everything has an end and I believe that all suffering will also end…I hope that one day I’ll be able to go to Tibet wearing my Chuba.