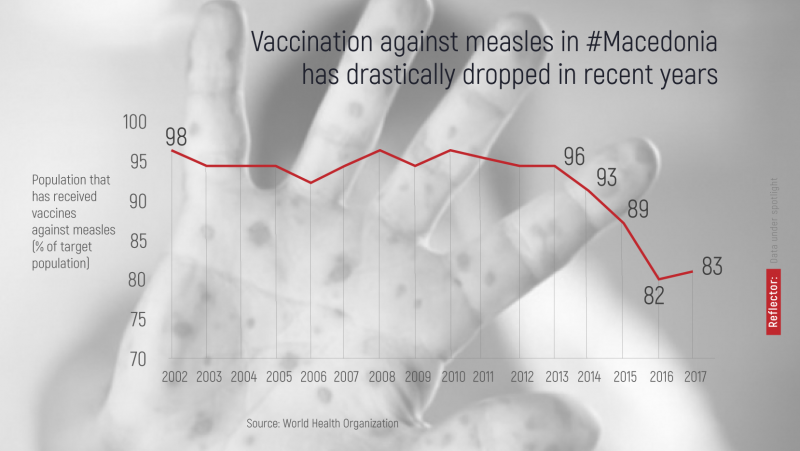 Vaccination rates against measles in Macedonia have drastically dropped in recent years, coinciding with anti-vaccine propaganda promoted on media outlets associated with the former-ruling right-wing regime. Illustration by @reflektor_mk, used with permission.

A measles epidemic in Macedonia has killed three infants since December 2018, raising fears among the population that years-long anti-vaccine propaganda pushed by right-wing populists is to blame.

Macedonia's measles vaccination rate fell sharply in the past five years and is now among the lowest in Europe, according to the World Health Organization (WHO). The WHO has declared “vaccine hesitancy” a global health threat in 2019.

Between three and 10 people are diagnosed daily with measles in Macedonia and over 259 people have been diagnosed thus far, according to the Institute for Public Health, the primary public health authority in the country.

The Institute noted that more than half of the total number of cases are of children below the age of four, and every fifth victim is above the age of 30. 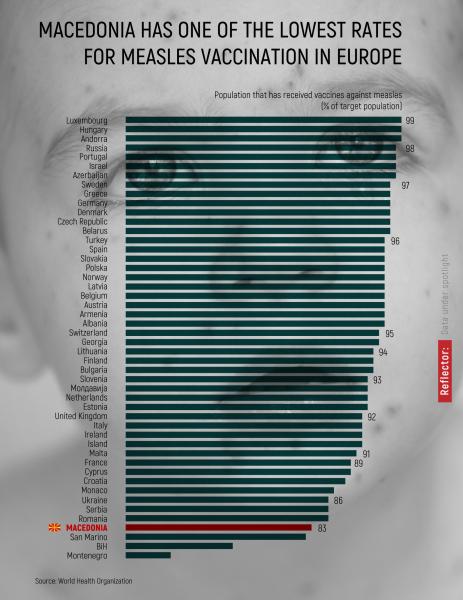 Macedonia has one of the lowest measles vaccination rates in Europe, according to WHO. Illustration by @reflektor_mk, used with permission.

Around 70 percent of those infected were either not vaccinated, not re-vaccinated, or had an unknown vaccine status.

“The disease can only be prevented with a vaccine. We once again urge all parents to most responsibly understand the recommendations for the MMR vaccine which protects against this severe illness. Vaccines are tested, and the quality is guaranteed,” the Ministry of Health said in a public statement on January 11.

During the early stages of the current epidemic, the Ministry of Health  said that in Skopje alone there were about 15,000 children who hadn't been immunized against measles. The government subsequently launched a campaign that resulted in 8,434 people receiving the vaccine — 5,900 of them in Skopje –, but that was not enough to stop the outbreak.

But when the public prosecutor began investigating a pharmaceutical company that had allegedly placed wrong expiry dates on vaccines bound for Macedonia, the scandal played right into the hands of anti-vax advocates.

After the first death was reported, tensions heightened. Many citizens started then to suggest that those spreading propaganda were criminally liable:

And now what?
This is what we have been talking about all along! Six-month old babies can't be vaccinated against measles because they're too young. Our duty is to secure that the children that can be vaccinated would protect them! […]

The anti-vaccine movement in Macedonia

Macedonian anti-vax advocates mirror similar movements around the world that falsely claim that vaccines can cause autism and other diseases.

At times, they claim that the quality of vaccines offered in Macedonia is sub-standard and therefore ineffective or harmful. Many parents choose to immunize their children abroad — most typically in Greece — where the caliber of the vaccines is deemed higher. 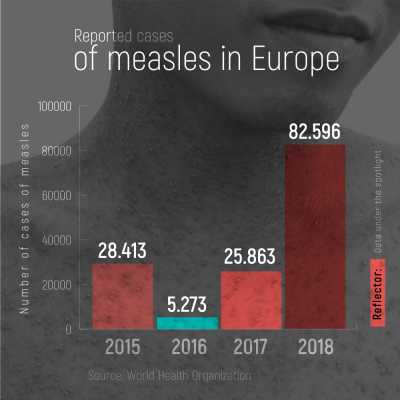 Reported cases of measles in Europe, based on WHO data. Illustration by @reflektor_mk, used with permission.

Following the 2008 fall out between the then government and NATO, media outlets under the direct control of Nikola Gruevski‘s right-wing regime began  promoting various populist topics on their channels.

Starting in 2013, this practice included giving more media exposure to anti-vaxxers. Then pro-government Sitel TV, a national broadcaster, did several live interviews with infamous Serbian anti-vax advocate Sladjana Velkov on its “Jadi burek” talk show, where she was constantly presented as a “health expert”.

“Alternative medicine” pundits became so prevalent on national TV that the Doctor's Chamber of Macedonia publicly demanded in 2014 that the state “take concrete measures” against them:

…Misrepresenting persons giving advice from the area of medicine and alternative medicine as medical professionals, while having no medical degree or the appropriate work license — for instance, Sladjana Velkov commenting on the quality and validity of vaccines on TV. [Other such cases include] TV shows presenting incompetent persons as healers of various diseases using herbs, commercial advertising of drops and solutions which physicians are not allowed to recommend on all TV stations, as well as self-taught nutritionists recommending recipes for long and healthy life. 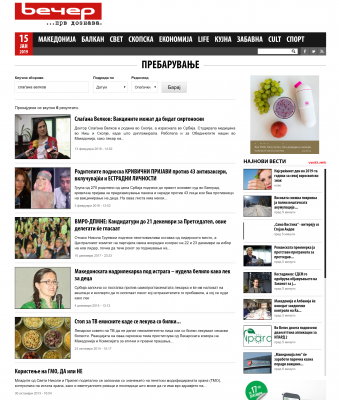 Screenshot of the search results of the archive of website of Vecher newspaper, with articles about Serbian anti-vaxxer informing about the charges against her as charlatan in 2015, and then presenting her as medical expert in 2018. The title of the latest article reads “Sladjana Velkov: Vaccines can be deadly!”

Meanwhile, in December 2015, Sladjana Velkov was sued in Serbia after she allegedly promoted bleach as medicine to children. She moved to Macedonia soon afterward and has lived there since. As of 2018, media outlets associated with the former ruling party continued to present her conspiracy theories as facts.

In August 2018, researchers at George Washington University revealed that 93 percent of messages about vaccines posted on Twitter between 2014 and 2017 came from accounts that exhibited malicious behavior, including those by “Russian trolls”.

According to their study, which examined a sample of more than 1.8 million tweets, “Russian trolls and sophisticated bots promote both pro- and antivaccination narratives,” thus creating a “false equivalency, eroding public consensus on vaccination.”

The current Macedonian government has promised to improve the quality of life in Macedonia by instituting democratic reforms.