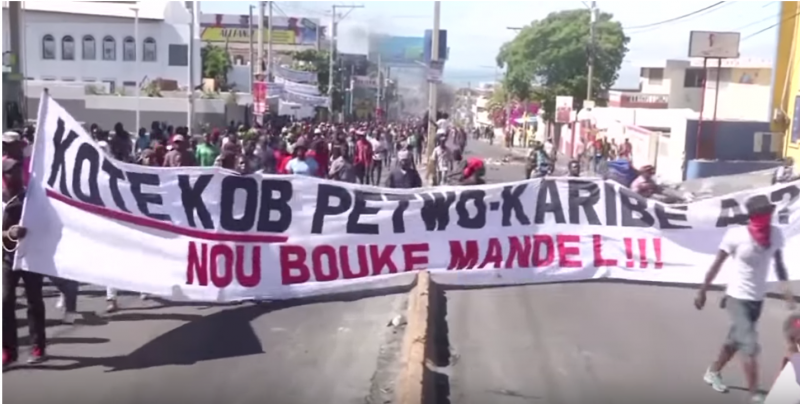 Screengrab of footage of the February 2019 Haiti protests, taken from a YouTube video posted by PBS NewsHour.

The streets of Port-au-Prince and other major Haitian cities have, for more than a week now, been filled with people protesting violently against the current government and asking for President Jovenel Moise to resign.

The unrest erupted on February 7, 2019, which marked 33 years since the country broke from more than two decades of dictatorship to move into a new era of democracy, stability and development. But this transition has not brought — so far, at least — the level of development or stability needed and tumult has ensued.

It's about the fourth time in less than nine months that major protests have threatened to engulf Jovenel Moise and his government since he took office in February 2017, following a long and contested electoral process that lasted more than a year.

In July 2018, people took the streets to protest against increased fuel prices and its impact on basic foodstuffs. Several businesses were attacked, pillaged or burned during those protests. The population's anger has also been inflamed by the endemic corruption surrounding Haiti's involvement in PetroCaribe. The regional energy program, spearheaded by Venezuela, was intended to provide petroleum and petroleum products under preferential payment arrangements, but instead of Haiti using the opportunity to finance development, more than US $3 billion has been embezzled by government officials through opaque contracts — including one with a company called Agritrans, which President Moise owns.

Against the backdrop of decades of political instability — 10 provisional governments, seven elected presidents, two military and one soft coups-d'etat and several United Nations (UN) stabilization missions —people have reached a breaking point. Living conditions have severely deteriorated, with around 60 percent of Haitians living well below the poverty line and — according to recent World Bank estimates — an unemployment rate of close to 14 percent.

The country did experience some economic growth right after the devastating January 2010 earthquake with the gross domestic product growth at 5.5 percent by 2011. But growth has slowed to below two percent since 2015. Haiti is one of the most inequitable countries in the region: 20 percent of the poorest share less than one percent of the national revenue. In addition to these structural problems, Haiti suffers from debilitating institutional weaknesses and systemic corruption.

Haitians — especially young people — have been using social media platforms to create what they call the #PetroCaribeChallenge in an attempt to mobilize civil society and ordinary citizens to put pressure on the government to bring those involved in the PetroCaribe scandal to justice.

The government was so shaken by the violent protests and the determination of the #PetroChallengers last summer that then-Prime Minister Jacques Guy Lafontant had to resign. His replacement, Jean Henry Ceant, took office in September 2018 in the hope that he could address the crisis, but anti-government protests persisted through October and November.

The situation has worsened over the past month as the Gourde, Haiti's local currency has continued to lose value. Inflation has risen to almost 15 percent and the price of basic food items has skyrocketed. President Moise has called for a national dialogue to address the crisis since December, but most sectors in political opposition to the government have refused to take part, insisting that his resignation is the only way forward.

The protests have now reached such a pitch that they've paralyzed Port-au-Prince and other major cities, with schools, hospitals and marketplaces being severely affected. Demonstrators, some who have turned to violence, not only demand that President Moise leave but also want radical system change: “tabula rasa” (clean slate), as they call it.

On February 14, Moise broke his silence when he addressed the nation, mostly to condemn the violence. The people felt, once again, that they had not been heard. In their estimation, the president missed yet another opportunity to show he has the leadership and character to stir the nation out of this crisis.

On February 16, the prime minister followed suit and addressed the nation, announcing a package of measures to relieve the suffering of the population and address the economic and political roots of the crisis. He reiterated that dialogue is necessary to establish a governing pact that benefits all Haitians.

Whether these two interventions will serve to calm the protests remains to be seen. Meanwhile, though, protesters have claimed that they have “locked” the country until Jovenel resigns or a modus vivendi is found, essential services were operating somewhat normally on February 16, which gave people the opportunity to stock up whatever food and basic necessities they could afford.

The crisis runs deep, though.

Political elites and powerful sectors of the country's oligarchy who are granted an unchallenged, economic monopoly have captured the state, establishing a rent system that is detrimental to sustainable economic growth.

The traditional groups in the the political opposition want power at all costs, but are failing to present sound, coherent alternatives to the status quo. The #PetroChallengers are still learning how transform positive social activism into effective political action. Ultimately, the big question that arises from this current political unrest is whether it simply represents more of the same or opens doors to create real, systemic change in Haiti.