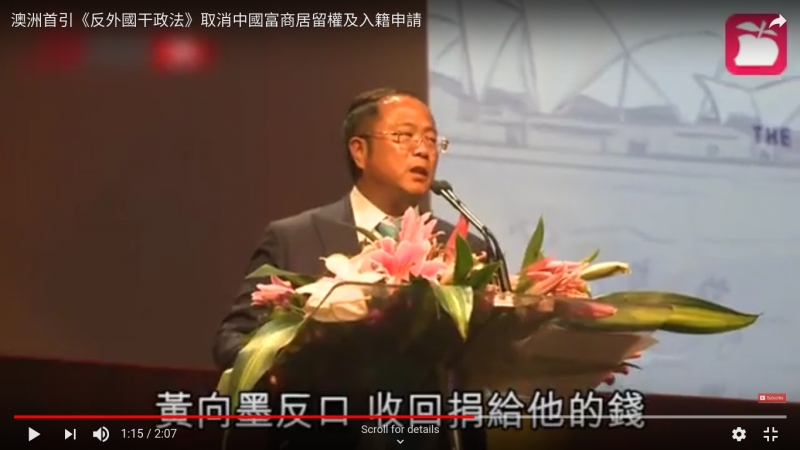 The news concerning Chinese tycoon Huang Xiangmo's revoked Australian citizenship has shaken the Chinese overseas and diasporic communities last week. Huang is now settled in Hong Kong and told the media that the ban from entering the country was “grotesquely unfair” and “based on unfounded speculations that are prejudiced and groundless”. However, the Australian government and many researchers feel that Huang was unfairly using political ties to push Chinese Communist Party interests within the country.

The Chinese Border-Crossing Question and Answer project hosted by the Hong Kong based Culture and Media Education Foundation (CMEF) interviewed Perth-based researcher W.L Yeung to explain the context of the incident.

CMEF: Who is Huang Xiangmo? How has he made his reputation in Australia?

W.L Yeung (WLY): Huang Xiangmo, whose legal name is Huang Changran (黄畅然), is a property developer, a Director of the Yuhu Group (玉湖集团), a political donor and a lobbyist. He relocated to Australia from China around 2011. The Australian public first heard of him when he splashed AUD$12.8 million on a mansion in a prestigious Sydney suburb in 2012. This real estate transaction had stimulated a buying spree of similarly expensive properties among Chinese investors.

He subsequently donated another AUD$4.5 million to several universities. Among the beneficiaries of his generosity is a former Australian diplomat who had once been a vocal critic of the Confucius Institute.

Mainstream media did not start to look seriously into him until 2016 when a Fairfax reporter discovered that Huang had made more than AUD$1 million donations to both major political parties from 2012 to 2015. Since then the total sum surged to around AUD$3 million.

The Fairfax report also revealed details of how Huang was caught up in a corruption scandal in his hometown of Jieyang in Guangdong Province prior to his departure for Australia.

WLY: I believe the “acts of foreign interference” here refer to Huang’s united front association and the pattern of his donations, both of which suggests he has been actively seeking political influence in order to promote the interests of the Chinese Communist Party.

A 2016 protest rally in support of China’s sovereignty at the South China Sea (SCS) was staged by the Melbourne branch of the ACPPRC. It also links to other protest activities, including protests against the visits of the Dalai Lama to Australia.

During parliamentary debates into the Sam Dastyari scandal in 2016, alarming evidence had emerged, pointing to ways in which Huang used his friendship with politicians to solicit policy endorsement in alignment with Beijing’s interests:

Government records also indicated that Dastyari had attempted to use his political influence to fast-track Huang’s citizenship application.

CMEF: Huang has been active in Australia for many years. Why does Australia government decide to take act until now? Has there been any political and legal development recently that leads to the current decision?

WLY: Australia’s counter-espionage legislation was seriously out of date in the past. Foreign donations were permitted in Canberra as as well as in most states (except NSW). Following months of intense debates and reviews, a new set of legislation on foreign political interference was passed in June 2018 which bans foreign political donations. The new legislation gives a clear definition of political interference, provides law enforcement the necessary tools to investigate and prosecute offenders, as well as the legal basis for the government to force foreign agents to register and to prosecute them when they fail to comply.

Diplomatic relations between China and Australia is now at an all-time low. China seems to take an offence at Australia banning Huawei from taking part in future 5G mobile infrastructure rollout and the passing of the foreign political interference legislation.

What is the general public reaction to the revoke of Huang’s permanent residence? How does the Chinese community react to the news in particular?

Yeung: Public opinion supports the government’s decision. Prime minister Scott Morrison’s personal rating had slightly improved since Huang’s ban was made public, even though Liberal continues to trail behind Labor in opinion polls.

The Chinese dissident community is jubilating. A Chinese-Australian community group, the Australian Values Alliance, has just issued a statement to welcome the decision. Outside of the dissident circle, however, Chinese communities nationwide are rather quiet, reflecting a sense of uncertainty and insecurity over the impact of the new legislation.

Pro-Beijing Chinese media in Australia have fired some pathetic shots. A widely circulated WeChat post from a Perth-based public news platform attempted to rouse sympathy by claiming that Huang, a respectable community leader, had been treated worse than a serial killer. The WeChat platform is owned by the general secretary of the WA Shanghai Federation, a powerful united front group whose president is an honorary advisor of the WA branch of the ACPPRC.

CMEF: What is the implication of the decision to Australian domestic politics and diplomatic relation with China? Would there be further action taken to reduce China’s interference in Australia?

WLY: A part of the new legislation contains a transparency scheme, modeled in part on the United State’s foreign agents registration act. It will require individuals or institutions to make a declaration if they are acting on behalf of foreign power to influence the political processes of Australia. Those who are currently lobbying for foreign governments in Australia have a six-month grace period to register. It is expected that some individuals or institutions who have failed to comply will be prosecuted. So yes, I believe this will go a long way in protecting Australia against interference from most foreign countries including China.

I am one of the Australian scholars of China, the Chinese diaspora and China-Australia relations who signed a joint letter in March 2018 to support the new foreign interference legislation. I share with other cosignatories a firm believe that “identifying, recognizing and winding back CCP interference as an unacceptable and counterproductive part of bilateral engagement is a step towards developing a healthy China-Australia relationship over the long term”.