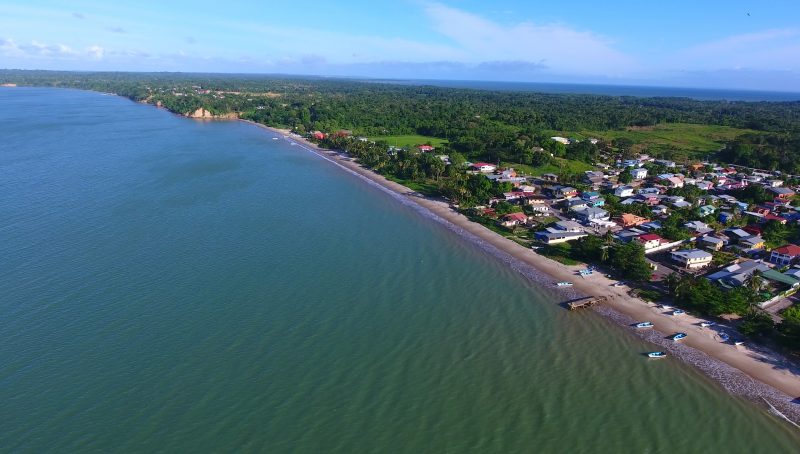 Cedros Bay, in southern Trinidad, with the Columbus Channel in the background. The narrow Channel separates Trinidad from the Venezuelan mainland. PHOTO: Grueslayer CC BY-SA 4.0 via Wikipedia.

Since January 23, Caribbean nations have been engaged in decisive international diplomacy regarding Venezuela’s political impasse, most recently as co-architects of the “Montevideo Mechanism”, the four-part solution to the Venezuelan crisis proposed by Mexico, Uruguay and CARICOM at last week's meeting in Uruguay.

One member of CARICOM, however, has been less certain about its position regarding the Venezuelan nationals who have sought refuge within its borders. As trucks carrying US-sponsored humanitarian aid arrived at the Venezuelan border last week, the Trinidad and Tobago government dodged questions in Parliament about whether it recognised that Venezuela was facing a humanitarian crisis, reiterating the diplomatic position of “non-interference and non-intervention” the country has taken as part of CARICOM.

Trinidad, the larger of the two islands forming the nation of Trinidad and Tobago, is located just 11km north of the Venezuelan mainland. As the political and economic situation in Venezuela has worsened, the island has experienced a large influx of Venezuelans fleeing hardship and violence. Some arrive clandestinely via Trinidad’s southern coast, others through the country’s ports. Some estimates suggest that the country has taken in around 60,000 migrants, a significant figure for a country of 1.3 million inhabitants.

Trinidad and Tobago's decision to repatriate 82 Venezuelans in April 2018 drew harsh criticism from the UNHRC, which called the move a “forced deportation” that was in breach of international law. With the world’s attention currently on the political impasse in Venezuela, the country’s lack of a cohesive approach to migration is attracting international scrutiny.

Though the country's Cabinet adopted a national policy to address refugee and asylum matters back in 2014, it is not being implemented. In its statement to the United Nations High Commissioner for Refugees (UNHCR), the government said that although it had acceded to the 1951 Refugee Convention, and is signatory to both the UN Convention Against Transnational Organized Crime and the UN Convention on the Protection of the Rights of all Migrant Workers and Members of their Families, a lack of legislation “has hindered the application of proper protection principles for refugees and asylum seekers.”

As a result, asylum seekers and people with UNHCR refugee status end up being treated like undocumented migrants, with many ending up in the Immigration Detention Centre, exploited by employers, or, according to a January 2019 Refugees International (RI) report, “forced into illegality”. As things stand, Venezuelans wishing to claim protection in Trinidad and Tobago are subject to the terms of the country's Immigration Act, which holds that undocumented migrants can be detained, fined and, quite likely, deported.

After the rescue in Trinidad last week of 19 female teenagers believed to be Venezuelans from a major drug and prostitution ring, there have been renewed calls for Venezuelans to be allowed to work in the country. The children of refugees and asylum seekers are also barred from attending public school in the country.

The Living Water Community, the Catholic charity that acts as the UNHCR’s implementation partner in Trinidad and Tobago, has been trying to put into practice a regional Refugee and Migrant Response Plan, designed to meet the needs of Venezuelans fleeing the country.

Trinidadian journalist Wesley Gibbings has suggested that legislation (or lack thereof) wasn't the only fly in the ointment, also noting on Twitter that:

No doubt, some of the xenophobia being exhibited in #Trinidad stems from the fact that some continued to assert that #Venezuela‘s humanitarian crisis had been externally-generated propaganda and not lived experience.

The rest of the region

Trinidad and Tobago and Venezuela have long enjoyed close diplomatic relations. An oil and gas producer, the nation benefited from the late Venezuela president Hugo Chávez’s push for higher oil prices, and last year signed a major gas deal with Chávez’s embattled successor, Nicólas Maduro, that some critics have suggested may be a factor in the government's hesitation to acknowledge the Venezuelan situation as a humanitarian crisis.

But while the country is feeling the heat due to its proximity to Venezuela, the state of affairs in other Caribbean nations is not very different.

According to a paper co-authored by Rochelle Nakhid, the regional coordinator with the Living Water Community for UNHCR, among Commonwealth Caribbean countries, “only Belize has legislation for refugees, while Jamaica and Trinidad and Tobago have a refugee policy but no legislation.” Nakhid is optimistic, though, that the drafting process to incorporate international migration protocols is “being undertaken in a commendably participatory way” with key stakeholders, including the Immigration Division.

Meanwhile, refugees are protesting Trinidad and Tobago's failure to live up to its international obligations around migration issues, while diplomats emphasise the need for a proper structure to be put in place.

Caribbean nations determined to have a say on Venezuela

Netizen Report: How Venezuela’s political crisis is playing out online

“Nobody knows what will come next”: Venezuelans rally in strongest challenge to Maduro yet