Let the dead tell their stories about Hong Kong 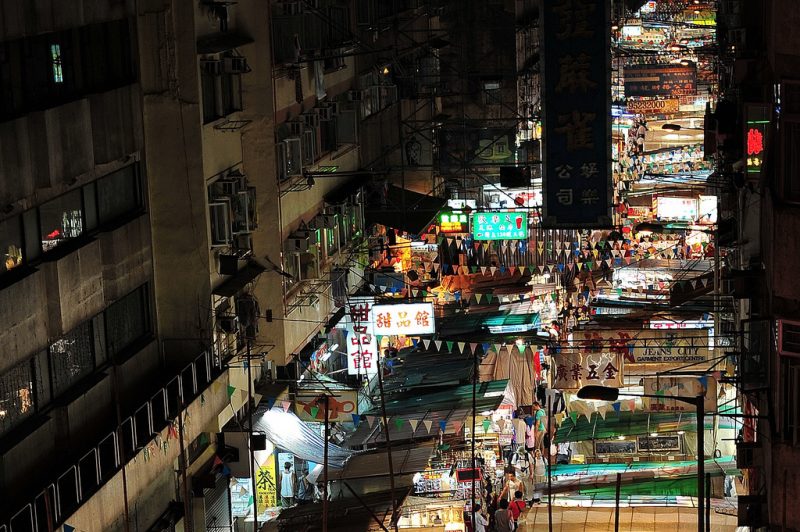 Warning: this story includes graphic descriptions of death and violence. A version of this story was previously published on Medium.

If you have traveled to Hong Kong, you have probably visited Yau Ma Tei, a popular night market district where people go to enjoy shopping and street food. Yau Ma Tei is one of the most densely populated areas in Hong Kong.

Since 2016, the district has been the site of “20,000 ways to die in Yau Ma Tei”, a guided “homicide tour” founded by Melody Chan and myself, who have lived in the area for many years. Through the tour, we seek to address the meaning of life and living conditions in Hong Kong.

The 1.5-kilometer tour route runs north and south of Yau Ma Tei and visits 12 murder scenes over two hours. We started it  originally as a Halloween activity to raise funds for a local organization. As the feedback was excellent, we continued organizing tours at night during the winter months when the weather is cooler. The tour guides are social workers, teachers, medical doctors and other professionals. Thus far, about 500 people have taken the tour.

The homicide cases we selected date mostly from 2012 to 2016. Details of the cases were compiled from newspaper reports and records from the Coroner's Court.

Below is a trailer of the tour's 2017 edition on YouTube:

So close, yet so isolated

The population density in downtown Kowloon peninsula is about 44,000 people per square kilometer, and about 20,000 people live in Yau Ma Tei. Many apartments are sub-divided into smaller units. People live so closely together, but at the same time, they are quite isolated.

Quite a number of the cases featured on the tour involve elderly people. In one case, an old man committed suicide by jumping out of the fourth-floor window of a building with a rope tied around his neck. The body dangled on the outer wall of the building above the street all night, but no one noticed it until the next morning when the residents of a building across the street opened their window.

Another case involves two elderly people who were found dead at home, one starved to death. It was later revealed that the husband was the caretaker of the wife, who was suffering from dementia. The husband had a fall in the living room and died, and the wife slowly starved to death in bed. It is difficult to imagine that no one had taken notice of the somewhat desperate living conditions of two elderly people.

According to the 2016 population census, there were about 1.16 million people aged 65 and over in Hong Kong—about 15.9 per cent of the total population. About 150 thousand of those people lived alone. The average monthly income of retired elderly people in 2016—including pension and family and government support—was HK$5,780 (US$720). The current individual median income is about HK$16,800 (US$2,200) dollars.

But living with family or others does not guarantee support. There are many family tragedies in the city, among the working classes, in particular.

In one case, the deceased was a 15-year-old girl who was into cosplay. She performed well in her studies but quarrelled with her family because of her hobby. Eventually, she dropped out of school and became a photo model to earn a living. She was murdered by a client who had paid her HK$500 dollars (US$65) to take pictures of her.

In another case, a dead baby with its umbilical cord intact was found in a bag in Yau Ma Tei subway station by a cleaning lady. Upon investigation, the police found out that the mother was a foreign domestic helper who became pregnant and was afraid that her employers would dismiss her. The woman was arrested and jailed.

During this segment of the tour, the guide raises the question: aren't the woman's employers also guilty? It is difficult to imagine not noticing that the person who served you daily is pregnant. There are more than 370,000 helpers in Hong Kong and the law requires them to live in their employers’ homes. This arrangement makes them vulnerable to abuse in the form of long working hours, poor diet, etc.

About a year after that case, another foreign domestic helper was fired for getting pregnant. It took two years for the woman to successfully appeal the illegal termination of the contract in court.

Many of the murders in Yau Ma Tei are crimes of passion committed by ordinary people, and as is typical when the crime is not premeditated, the perpetrators make many mistakes.

There is the case in which a man killed his older brother in an open street with a nine-inch fish knife that penetrated the brother's lungs. The knife was supposed to be a gift for the brother.

One killer stayed at the crime scene after the murder; another used his ID card to book a hotel room to hide the body.

Another murder took place in a convenience store. The incident was recorded by closed-circuit TV. The murderer was a tourist holding a Canadian passport, who stabbed the storekeeper after the latter questioned him for taking items from the shop without paying.

An encounter with souls and their shadows

The majority of tour patrons are college students. Some join out of curiosity; others consider it a way to educate themselves. A doctor who was part of a team of medical workers who took the tour said this of one case:

The protagonist of the case is very similar to the patients we often encounter in the accident and emergency wards – drug addicts, street sleepers, refugees. We all have to rescue them in the emergency room. But usually they are quite hostile in their attitudes. It’s very difficult to deal with them and we tend to lose patience over time.

This guided tours remind us that we must be patient and should not become indifferent. And their lives are very miserable and they struggle hard to survive.

Yau Ma Tei's 20,000 residents will all eventually die in different ways. We believe that upon their death, their souls will become part of the fabric of the city and continue to linger in the alleys and streets, reminding people of the meaning of existence. The tour aims to create a space for these shadows to reveal their stories.