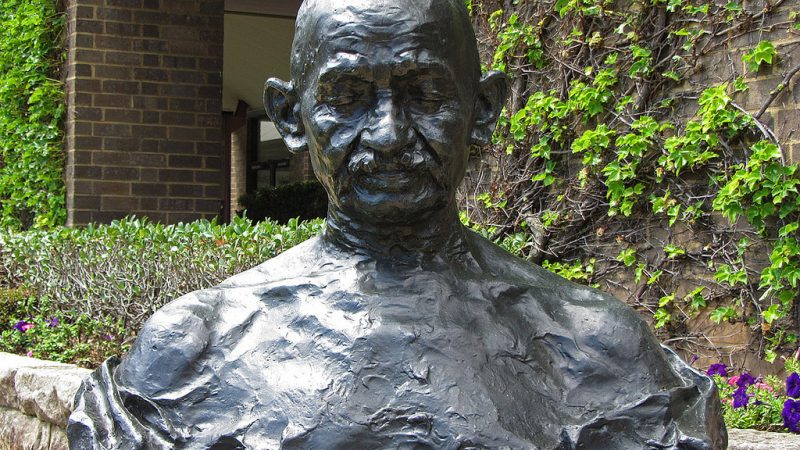 A sculpture of Mahatma Gandhi, the father of the nation for India. Image from Flickr by NewTown Grafitti. CC BY 2.0

Amid high-pitched campaigning for India's upcoming general elections, the leader of a Hindu fringe group shot an effigy of the country's most prominent leader, Mahatma Gandhi, and a subsequent video of the incident went viral, causing outrage across the country.

In the video, a saffron saree-clad Pandey surrounded by other right-wing group members can be seen firing an air pistol at Gandhi's effigy in celebration. In India, multiple right-wing groups praise Godse for having killed Mahatma Gandhi, calling the former ‘patriotic and nationalist’ and the latter ‘too moderate’.

The action drew widespread criticism from Indian National Congress headed by Party President Rahul Gandhi, with multiple state-wide agitations and many activists joining the fray. Protesters are calling the act ‘dangerous’ (despite being symbolic in nature) against the independence leader. Police officials who had been deployed finally arrested Pandey and her husband, who is seen taking part in the video footage. Numerous arrests subsequently followed after the high-profile event.

Gandhi, despite being a revered leader in post-independent India, also starkly divides various political groups. Recently, a statue of Gandhi was removed from a university in Ghana owing to his apparent racist comments against African communities.

Despite Gandhi's globally revered image as the founder of the non-violent movement against the British Empire and India's subsequent Independence, Hindu hardliners accuse the leader of betraying the community by being ‘pro-Muslim’ and supporting India's partition and the birth of Pakistan. Nathuram Godse fatally shot Gandhi on 30 January 1948 and was a member of multiple right-wing groups including the Hindu Mahasabha.

This is their politics. Right from the lowliest troll on Twitter to Modi himself. Each and every sanghi is a fan of Godse and glad that he murdered Gandhiji pic.twitter.com/2tNWNOXXSV

‘Not the first instance’

This is not the first time right-wing groups have publically revered Gandhi's killer. In 2015, the right-wing group Akhil Bharatiya Hindu Mahasabha announced plans to install statues of Godse across six districts — leading to protests across India.

On social media, netizens protested against the latest incident and its implications against the revered leader known globally for peace:

Some supported her ‘freedom of expression':

She fired at an Effigy of Gandhi with an Air Pistol. However obnoxious the act, this was her FOE and no reason to be Jailed https://t.co/QSsZKHBFjB

Ah, a Hindu nationalist group is shooting a gun at an effigy of Gandhi (which apparently oozed blood) and garlanding a statue of his assassin. Carry on. https://t.co/l6ul6ZskTi

Last year, numerous TV news channels had conducted debates on a portrait of Jinnah at Aligarh Muslim University. These were endless debates stretching for days. The issue was kept alive. How many of those channels debated the shooting of the Gandhi's effigy by Hindu Mahasabha?

An advocate of non-violence, Gandhi ji had created many enemies when he was occupied in teaching the world the power of ahimsa. While he had the three-wise-monkeys that guided us all to not to see evil, not to hear evil, and not to speak evil, people today are doing exactly the contrary.

Recently, an Indian Parliamentary committee summoned Twitter to appear before a panel for apparently developing an anti-right-wing bias, which was rebuffed by Twitter representatives. Indian right-wing groups are seeking to normalize Hindutva form of nationalism and alter India's secular nature established by the constitution. And Indian elections across 29 states will only intensify the polarisation.

RW trolls have been attacking @Twitter @misskaul & @jack for suspending RW abusive accounts. Later @TwitterIndia was summoned by Parliamentary committee of IT for acquiring an anti-right wing attitude. All thanks to @ianuragthakur
Let me share a few accounts which were suspended pic.twitter.com/zZ0SJxhDXt