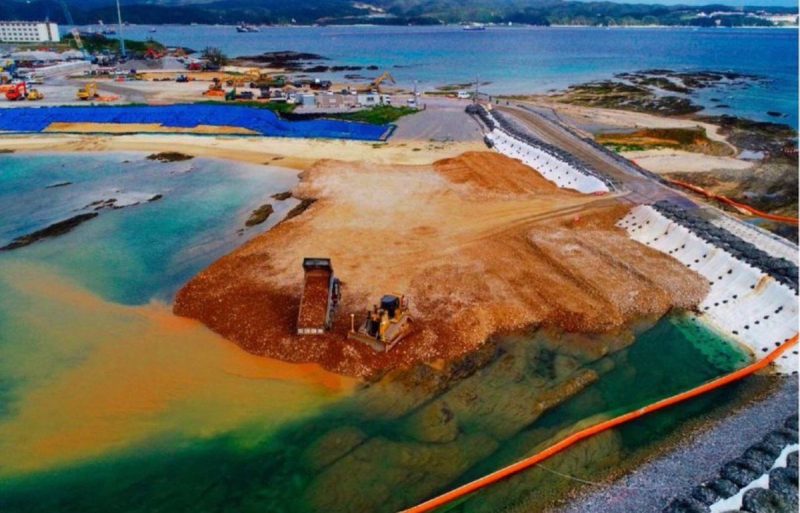 Government infill project at Henoko Bay in Okinawa. Questions about the use of environmentally harmful red soil in the project led to demands that a journalist be shut out of press conferences. Image widely shared on social media.

A decision by Japanese government officials to  “restrict” questions from an unnamed reporter during press conferences has provoked protests by other journalists.

The controversy has re-raised longstanding questions about the environmental impact of a controversial new base for US Marines being constructed in the southwestern prefecture of Okinawa.

The unnamed reporter in question is most likely Mochizuki Isoko, a journalist with the Tokyo Shimbun daily newspaper, who is known for asking difficult questions.

In Japan, news outlets typically get access to politicians and government officials through press clubs, which regulate the activities of members, and can even exclude reporters or news outlets. In turn, sources, such as government departments, can deny or limit press clubs with access. But it's unusual to ban or restrict the activities of journalists from media outlets like Tokyo Shimbun, a prominent daily known for its watchdog approach to government activities.

Reporter questioned environmental effects of construction for US Marine base

Mochizuki apparently angered the Cabinet Office during a news conference on December 26, when she asked about the risks of environmental contamination at a controversial construction site in Okinawa.

In order to build a long-planned base for US Marines permanently stationed in Okinawa, sand and rock infill is being used to build an artificial island in a bay off of Henoko, a township about 65 km north of Naha, Okinawa.

The construction project is destroying and literally paving over existing tropical coral habitat in the bay. It has been reported that the construction project is using inexpensive red soil infill, instead of the gravel that was budgeted in the project and paid for by the government, in an effort to cut corners. There are also suspicions that construction contractors including Ryuku Cement are pocketing the difference.

The use of red soil as infill for marine construction projects is specifically prohibited by Okinawan law, even though the Henoko project has the direct support of the central government in Tokyo. The iron-rich red soil contaminates the surrounding seawater and is deadly to native corals. Local activists such as the Osprey Fuan Club say the infill also will likely contaminate nearby surviving coral colonies.

The preservation of coral habitat displaced or destroyed by the Henoko project has been a contentious and potentially embarrassing issue for the government for the past few months, with Prime Minister Abe even claiming corals would somehow be moved away from the infill site to be transplanted in a new location.

Reporter accused of asking questions that would ‘spread misinformation’

When Mochizuki asked a series of pointed questions about the possible harms of the project at a December 26 press conference, it struck a nerve with media relations staff at the Cabinet Office.

Shortly thereafter, in their letter to the press club, the Cabinet Office strongly denied that red soil was being used as infill, and then also asserted that if it was used, its presence did not contravene Okinawan prefectural laws.

The Cabinet Office did not name Mochizuki, but instead stated that a “certain reporter” (特定の記者), had asked “inappropriate questions” (“正確でない質問に起因するやりとり”) that would “spread misinformation” to both members of the press club and to the general public (“内外の幅広い層の視聴者に誤った事実認識を拡散”). The Office said this could “impair” the significance of information presented during press interactions with the Cabinet Office itself (“記者会見の意義が損なわれる”).

The Cabinet Office then demanded that this unnamed reporter be “restricted” by the press club from asking questions at press events, for supposedly spreading misinformation about infill used in the Henoko project.

The reporter is widely believed to be Mochizuki Isoko, given that she had raised the controversial topic of red soil infill at the December 26 presser.

The letter from the Cabinet Office to the press club came to light more than a month later, on February 1, when it was published by Sentaku, a weekly news magazine. The Sentaku story swiftly generated a firestorm of debate.

An opposition lawmaker commented that “it's totally obvious to anyone that it's red soil” that is being used as infill at the Henoko site. After reading about the news in Sentaku, the Federation of Japanese Newspaper Unions (commonly known as the 新聞労連, Shimbun Roren) also publicly pushed back against the Cabinet Office, generating even more discussion.

On February 5, the Federation lodged an official complaint with the Cabinet Office.

For the rest of the week, trending hashtags on Twitter included “Tokyo Shimbun reporter restricted from asking questions” (#京新聞記者の質問制限), “towards a country where we can freely ask questions” (#質問できる国へ) and “we have the right to know” (#知る権利).

When questioned about its letter to the press club, the Cabinet Office denied that it was trying to shut down Mochizuki or any other reporter:

(There is no intent) to place any conditions or restrictions on the right of reporters to ask questions.

At a February 7 news conference, a Cabinet Office spokesperson also denied that the unnamed reporter was Mochizuki, after Mochizuki herself — undeterred by previous requests — asked the spokesperson about the intention behind the Cabinet Office's original letter. She described the letter as “a form of psychological pressure on me and my company.”

As a reporter, Mochizuki has long endured adversarial treatment from government officials that could be described as deliberate bullying.

In regards to Mochizuki Isako from Tokyo Shimbun, here's an article published in December 2018. In terms of how (the Chief Cabinet Secretary and the Communications Director) behave, here's a look at how much time is spent answering her questions.

#towards a country where we can freely ask questions