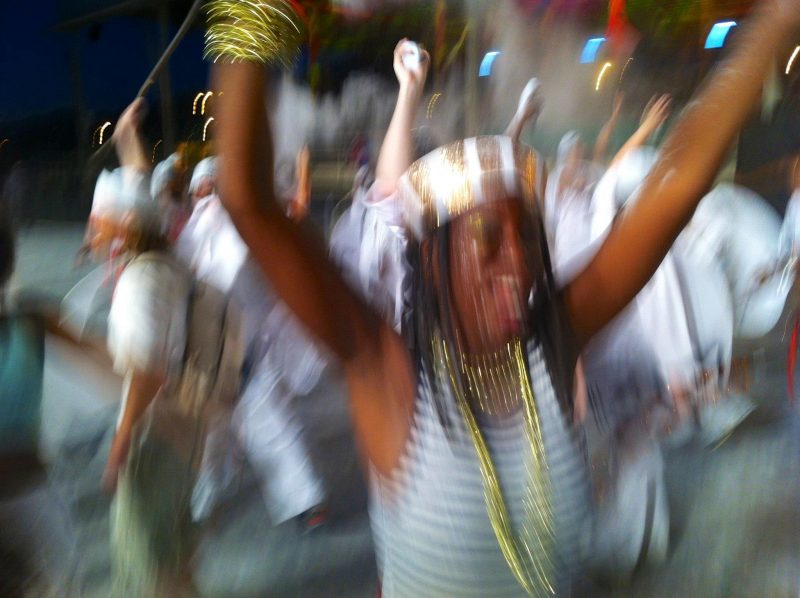 A carnival masquerader “jumps up” to soca music on stage at the Queen's Park Savannah, on Carnival Tuesday, 2009. Photo by Georgia Popplewell, used with permission.

When revelers take to the streets each year for Trinidad and Tobago Carnival, they do so with a soundtrack. Their playlist is always an energetic mix of that year's hottest soca music hits, but the Road March — the song that is played the most at specified judging points along the parade route — is a title that comes with both a valuable prize package and the prestige of being part of a proud history.

For most soca performers, the appeal of winning the Road March is, quite literally, street cred. Claims in the last decade or so of the competition being rigged — ostensibly by a group of powerful radio station owners, DJs and music industry executives known as the “soca mafia” — have not eroded the belief that the Road March represents the voice of the people.

Soca star Machel Montano, who has won the coveted Road March title a whopping nine times thus far, describes it as “the song that make[s] the people feel the most vibes and come out of [them]selves” — and which artist wouldn't want to lay claim to that?

But don't be fooled into thinking that the road to the Road March is solely based on creative merit. A Road March song must have certain key ingredients to even be in the running:

1. A danceable, yet powerful melody that makes people want to “break away” on stage, with lyrics that capture the feelings of joyful release and abandon that Carnival represents.
2. A refrain that the audience can echo, in the call and response tradition of the calinda, from which calypso — and its modern-day hybrid, soca — originated.
3. A well-timed release. If a song peaks too early in the season and doesn't have staying power, competing tunes can usurp its position. Conversely, if a great tune is released too late, masqueraders may not have enough time to get familiar with it during pre-Carnival events.

Sometimes, the Road March contest has a clear favourite that never gets challenged; at others, the competition is so stiff that it's simply too close to call. In no particular order, here are some the songs that we think are the biggest contenders for Trinidad and Tobago Carnival's 2019 Road March …

The Queen's Park Savannah, an oasis of green space in the middle of Trinidad's capital, is the hub of the country's Carnival celebrations and home to the festival's main stage. This song perfectly captures the significance of the space, and the memories it has helped create for masqueraders through the years.

There is a reverence about the tune: as if the Savannah is the sun at the centre of the Carnival universe and everything else just has the privilege of revolving around it. “Savannah Grass” is an invitation to experience this magical world. Oxymoronically, the loose steadiness of the percussion is a nod to both the regimented dedication of Carnival lovers and their easygoing way of enjoying themselves.

The tune is both melodious and energetic, with a pace that makes it a good song for “chipping” (the light shuffle step with which masqueraders walk/dance down the road). By its clever incorporation of archival Carnival footage, the official video further elevates the genius of the song by showing how it seamlessly spans generations and builds on the foundation blocks of calypso to produce a fresh soca offering. Even if it does not win Road March (though it has a very good chance!), “Savannah Grass” will go down in the annals of soca music as one of the timeless tunes that stir the emotions of Carnival lovers everywhere.

An interesting idiosyncrasy of “playing mas'” and dancing to soca music is that somehow, people's hands go up in the air, usually with whatever they are holding at the moment, from drinks to facecloths. Colloquially called “rags”, these come in handy for soaking up the sweat while “jumping up”. The practice was not lost on Super Blue, who wrote a song called “Get Something and Wave”, that won the 1991 Road March.

He echoed the concept a few years later with “Bacchanal Time”, in which he commanded masqueraders to “start to wave” as the brass section played the familiar “F-jam” or “tantana” melody in the background. Super Blue had come up with a formula for the type of song that worked on the road: he won again in 1995 with his ode to cricketer Brian Lara, in which he directed his audience to “raise yuh bat and party”.

“Rag Storm” has many of those same elements — the lavway-type call-and-response, with a wild aerobic pace that encourages frenzied rag-waving. It's a great song for the stage as masqueraders break loose and “play themselves”, and may very well prove to be one to beat in this year's Road March race.

If there's one song that's aggressively going after the Road March title this year, it's this big tune that has several winning ingredients: a driving “power soca” beat, strong lyrics that capture the essence of the unity of the festival, and a clever hook that appeals to the tribal facet of Carnival — going everywhere with your crew, or as Trinbagonians say, your “famalay” (not to be confused with “family”):

Well, let me tell you one time, famalay is famalay and that different from bloodline
Some say them is blood but them don't want to see the sunshine
Famalay doh ever ‘fraid to have your back at all time…

Without giving instructions (with the exception of one verse in which Skinny sings “show me yuh hand” and “come follow me”), the song achieves an almost militaristic sense of purpose. Its sweet soca hook, peppered with the occasional dancehall-inspired lyrical improvisation, has been driving crowds wild at Carnival fetes.

Though there was some discussion as to whether or not “Famalay” would even qualify for the Road March contest because Skinny hails from St. Vincent and the Grenadines, the rules say that once “the majority of the lead vocal performance” is “undertaken and carried out by nationals of Trinidad and Tobago”, the song can be a contender — and this one definitely is.

This is not to say that it's a three-song race. With just about three weeks to go before Carnival, there other tunes — including two wicked ones by female artists Destra Garcia and Patrice Roberts — that may just give our picks a run for their money, and with soca performers still dropping new tracks, the battle for Road March 2019 is still being fought.