For the first time, transgender candidates will run for seats in Bangladesh's National Parliament 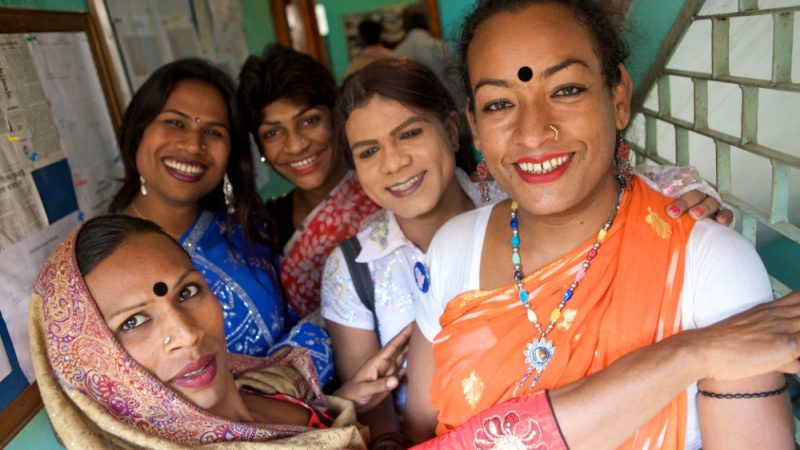 A group of “Hijras” in Bangladesh. Image via Wikimedia Commons by USAID Bangladesh

For the first time in Bangladesh's history, transgender candidates who identify as women can vie for the 50 seats reserved for women in the upcoming elections in the Jatiya Sansad or National Parliament.

The election schedule is due to be announced on 17 February, and so far, eight members of the transgender community have been confirmed as running on the Awami League party ballot, which is the first and only political party in the nation to allow this.

The Bangladesh National Parliament has 50 seats among a total 350 reserved exclusively for women, according to article 65 of the national constitution. In Bangladesh, transgender people are categorized as “hijra” (a term referring to a member of the third sex) on their national identity card. However, there is no specific provision in the constitution that prevents members of the hijra community from running for the 50 reserved seats. According to Election Commission Secretary Helaluddin Ahmed, any eligible woman, including hijras who identify as women, can qualify for the reserved seats.

For Falguni, one of the eight transgender candidates, running for office means representing the whole transgender community:

We are citizens of Bangladesh but we have no representation in the parliament. There is no one from our community who can understand and raise our concerns. That is why we are running for the seats.

Of the 16 million people in Bangladesh, an estimated 10,000 to half a million belong to the transgender community. Although there is legal acceptance of the transgender community by the Bangladeshi Government, transgender people have faced discrimination and a tremendous amount of disapproval, often falling victim to hate crimes and violence. In the past, employment was denied and many people tried earning money by begging or by singing during weddings and childbirth.

When my parents came to know about my sexual orientation they beat me every now and then and forced me to give up my feminine qualities.

They said I was bringing shame to the family. Finally, I decided to leave my house and live with other transgender people.

Rupa (not her real name), one of the many survivors of child abuse, told a reporter of The Dhaka Tribune:

My father used to tell me that I am abnormal. He used to say abnormal people do not need any treatment; he said it would be better if I died.

.@NHRCB adresses child rights issues and rights of minorities and other vulnerable groups. #Bangladesh is a multi ethnic and multi cultural country. #Hijra community is still often harassed due to an absence of clear identification guidelines for this community. #Presessions pic.twitter.com/oRf29Bge2z

On November 11, 2013, the hijra community was officially recognized as a separate gender by the nation's government. This step was mainly taken as an aim to remove the socio-economic barriers to the community and to end their discrimination in education, health, and housing.

A year later, on November 11, 2014, thousands of Bangladeshi transgender people wearing colorful sarees marched the first ever Pride parade in the country to mark a year since their official recognition as a third gender. The streets of Dhaka were filled with colors and the sounds of joy as they carried a huge Bangladeshi flag and banners, one of which read: “The days of stigma, discrimination and fear are over”. Since then, the transgender community has been making strides towards carving out space for themselves in Bangladeshi society. On December 2014, the Ministry of Social Welfare invited the community to apply for government jobs.

On July 2015, after Labannya Hijra witnessed the murder of a secular blogger Washikur Rahman by Islamist radicals on the streets of Dhaka, and successfully helped in the arrest of the perpetrators, the Bangladesh Government announced plans to recruit and enlist hijras as traffic police officials.

All these events have been widely rejoiced by not only Bangladeshis but by people around the world. Below Twitter users describe their support for the Bangladeshi transgender community:

Kudos!
wind of change, may PM select atleast 1 from 8 nomination of transgender applicant for 50 reserve seat at National Parliament.

I don’t know if it’s true I don’t know if this will happen but all I know is it’s about time that we move forward together as humans. The thought of equality for all irrespective of their gender, cast, race, ethnicity or orientation makes me proud to be a citizen of Bangladesh #eqaulityinBD

However, Ishti Sajid questioned their competency:

Nice initiative but would have been much better I think if they were groomed first rather than as just positioning as a puppet on the parliament!

Awami League-led 14 party alliance had a landslide victory on the national elections of 30 December 2018. Of the 50 reserved women's seats, they have 43. It is still to be seen how the party, and the transgender nominees running on their ticket, will do in this year's election cycle.