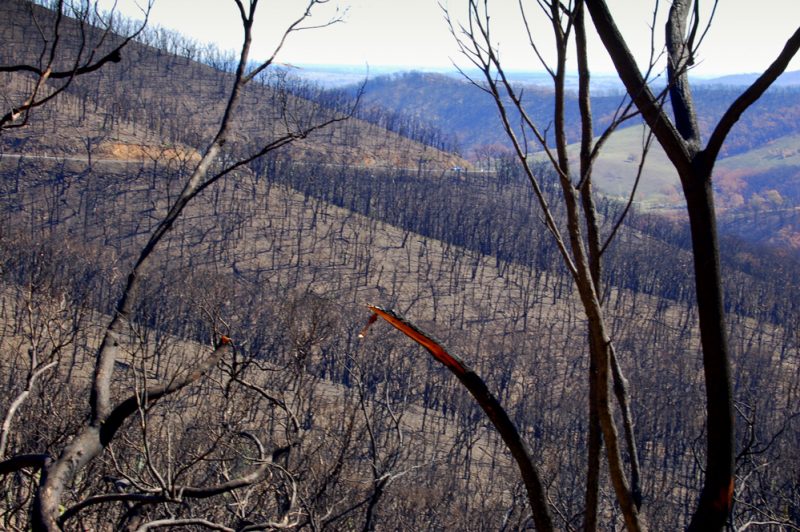 During the week of the 2019 anniversary, Victorians have remembered Black Saturday, with mainstream media presenting many personal stories of the fires. ABC Melbourne, the local arm of the national broadcaster, commemorated the victims by sharing stories from survivors.

Others have shared their memories online. On her blog, The small Adventurer, Indya recounts losing her home and shares the impact of the fires on her life since that day:

Ten entire years, and I still don’t think one single day has passed without me mentioning – or at least thinking about – the fires.

[…] I am also still really, really nervous around things like ovens, stoves, heaters, and even lighters. As a baker, you can imagine how difficult having those fears is when I’m going to take something out of the oven, and suddenly something doesn’t move the way I expect it to or something like that, and I instantly freeze up and freak out.

[…] Tomorrow I will be thinking of all those who had it much worse than me, and hoping that the people who are still alive and lost so much more are doing okay. But, I will also be thinking about myself, and allowing myself to feel whatever I happen to feel, because my feelings are valid too. My fear and sadness is valid too, and always have been, it just took me a while to realise it.

#BlackSaturday #7Feb
10 years on. My heart and soul changed forever. As always, my thoughts are with every person affected by Black Saturday. I am forever grateful for the help my family and I received from those on and off the mountain.
I was luckier than some.??? pic.twitter.com/gKHLwlUbpH

Melbourne lawyer Georgia was fifteen at the time. She summed up the feelings of many:

10 years ago, my best man, and his family, perished in the ‘Black Saturday’ Fires, north of Melbourne, Australia. Still feels like yesterday.? Our thoughts go out for there Families. RIP My dear friends ?\@TruemanTrades @stocktcm @iObvi8 pic.twitter.com/DtZxTlodD7

Many people are connecting the Black Saturday tragedy to current extreme weather conditions that are wreaking havoc in other parts of the country. Another natural disaster with extraordinary flooding has hit Northern Queensland following record rainfall. Blair Drysdale gave some sense of the impact in inland areas:

This is a mates farm north of Julia Creek in North Queensland, his whole farm is like this…….all 150,000 acres. pic.twitter.com/dv2k6kzqDn

The situation in the coastal city of Townsville was also extreme. Video news agency Ruptly documented the torrents:

Melburnian Ann Moorfield made the connection:

Just need to remind everyone that when we had Black Saturday there were floods in qld same time. There was an appeal in Qld for flood victims and the victims said to send the money to Vic bush fire victims they need it more..so dig deep for Qld flood victims. #Townsville

Elizabeth Donoghue took the photo at the top of this story “from a road that many people describe as a death trap, a road that I have always avoided till now. But it was worth a hairy drive!” She posted it two months after the fires on Flickr:

Now that everyone knows that this beautiful country that was so burnt in February is not really destroyed, but is just doing what nature intended, and is regenerating, as nature intended, let me show you this amazing landscape. It gives some idea of the scale of the fires; and it also shows, for me, the folds and rhythms of the land beneath the vegetation. i took this from a road that many people describe as a death trap, a road that I have always avoided till now. But it was worth a hairy drive!

Finally, Adrian Cutts reflected on the growth of social media since Black Saturday:

Incidentally, it will also be 10 years tomorrow, since most of Australia found out what Twitter was.

Black Saturday was the turning point for Twitter in this country, from when it was perceived to be a untested medium, to becoming a part of our lives.