#FreeAmade: Journalist arrested and tortured after reporting on violence in northern Mozambique 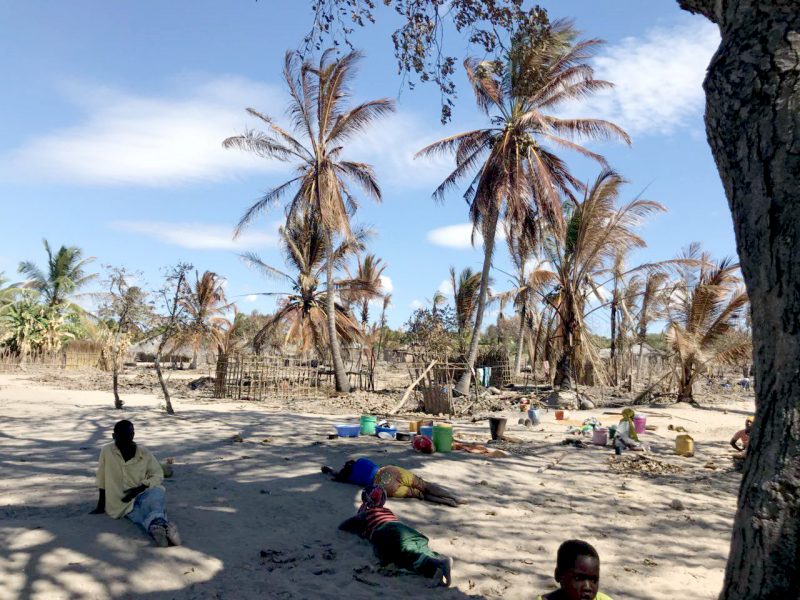 Survivors who lost relatives and houses rest outside following the June 5 attack in the village of Naunde in Cabo Delgado, Mozambique. Photo by Borges Nhamire, used with permission.

Mozambican journalist Amade Abubacar was arrested on January 5, while reporting on a trend of violent attacks on small villages in Mozambique's province of Cabo Delgado.

Located in northern Mozambique, Cabo Delgado is rich with natural resources, such as ruby, charcoal and natural gas, found in the Rovuma Basin. Some observers say the group coordinating the attacks intends to begin trafficking these resources.

Since October 2017, multiple attacks have been carried out in different districts of Cabo Delgado by what appears to be the same rogue group. Many media have reported on the attacks, but state officials have been unwilling to comment on or confirm evidence in these cases.

In 2018, more than one hundred people were prosecuted together in relation to these crimes. Their trial is expected to end this year.

Amade Aoubacar works with the Mozambican Social Communication Institute and as a journalist with news site Zitamar and the local radio station, Nacedje.

The journalist was arrested and detained by Mozambican federal police on January 5, while photographing survivors of an attack in Cabo Delgado.

Amade was then taken to a military quarter of the Defense Forces of Mozambique in the district of Mueda, despite not being a member of the armed forces. After a few weeks, he was transferred to a civilian prison to legalize his detention in Pemba, capital of Cabo Delgado .

After he arrived at the civilian prison, Amade contacted the Mozambican Order of Lawyers and reported having experienced torture at the hands of Mozambican armed forces, who he says beat him and deprived him of food.

Many individuals and media freedom groups have spoken out in his Abubacar's defense, saying that his arrest and detention have threatened the exercise of free expression.

The Media Institute of Southern Africa, which monitors media rights and activities in the region, spoke out strongly against Amade's detention:

Abubacar’s prolonged detention by the military is a violation of his rights as well as his arrest under unconfirmed charges. The Mozambican government is setting a bad precedent in the violation of free expression and access to information in the region.

Amade Abubacar is a respected journalist who was recording testimony from people who fled deadly attacks in Cabo Delgado when he was arrested by police. This is the latest demonstration of contempt coming from Mozambican authorities and directed at freedom of expression and freedom of the press… [authorities] view journalists as a threat and [thus they] are treated as criminals.

The campaign has also spread on Twitter, with the creation of hashtags like #FreeAmade to advocate for the liberation of Amade.

@UNHumanRights demands immediate release of journalist #AmadeAbubacar
Arbitrary detention was no longer enough, they had to torture him, make him sleep with handcuffs at the military base without give him food. This is terrible. #FreeAmade #CaboDelgado

Angela Quintal, coordinator of the Africa program for the Committee to Protect Journalists, cast blame on the president of Mozambique:

#Mozambique: Today, Jan 30, is the 25th day journalist #AmadeAbubacar remains detained simply because of his journalism. One would think that President @FNyusi has enough on his plate without having to waste resources on jailing an innocent man #FreeAmade https://t.co/giF8zFnaCY