An owl refuses to leave Tanzanian parliament. What does it all mean? Nyerere Square in Dodoma, the capital of Tanzania, and home of the parliament, ”Bunge.” Photo by Pernille Bærendtsen, used with permission.

On January 29, when the Tanzanian parliament (Bunge) assembled in Dodoma for its first session of 2019, an owl flew into the building, perched on the ceiling and observed the assembly from above.

The incident drew national attention and provoked questions from social media users and newspapers. What could the presence of an owl in parliament mean?

The owl has been spotted twice inside the halls of parliament in the city of Dodoma. What does it seem to signal?

The owl that entered parliament signalled the coming death of Tanzanian democracy? 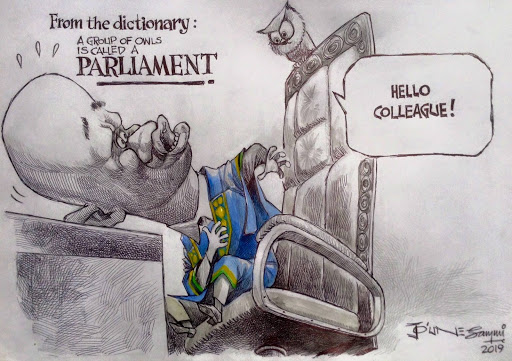 Tanzanian cartoonist, Samuel Mwamkinga (Joune), later illustrated the incident with a reference to the British term ‘’a group of owls’’ based on the Greek perception that owls are wise (illustration used with permission).

The owl is, however, seen as an omen of death and misfortune in Tanzania.

And — the owl was determined to stay in Bunge, according to The Citizen:

The owl, a nocturnal bird, could not leave … despite several attempts by parliament officials to evict it.

Owls are not unusual in Tanzania, and neither is Tanzanians’ inclination toward superstition. A 2010 survey found that 93 percent of Tanzanians believe in witchcraft.

For this particular session, the presence of the owl offered a symbolism, even for the nonsuperstitious, which was too stark to be ignored.

On the agenda for Tanzania’s first parliamentary session of 2019 were the proposed amendments of the Political Parties Act, which has followed a months-long, intense debate in an increasingly unstable political climate.

Tanzania made history in 1992 as one of the first countries in Africa to establish a multiparty system, which allowed opposition parties. The Political Parties Act (here with proposed amendments) was also introduced in 1992 and has been amended over time with the latest amendment in 2009.

With the owl perching above the assembly, Tanzanian parliamentarians agreed to amend the act — a step that critics regard as a serious weakening of the multiparty system in Tanzania, and thus also democracy.

In short, the renewal of the act provides more authority to the government-appointed registrar to not only deregister political parties but also to issue punishments in the form of imprisonment if a political party, for instance, carries out civic education related to voter registration and other politically-motivated activities, according to Reuters.

Several media quoted Zitto Kabwe, leader of the opposition party ACT-Wazalendo, who already back in August 2017 criticized the proposed amendment of the act, predicting it may undermine political rights. Kabwe then compared it to the Media Services Bill 2016, which set the free and independent media back. Now, Kabwe calls attention to the inherent contradiction caused by the amendment of the Political Parties Act:

Tanzania's declining democracy under the rule of President Magufuli has been a recurring topic in the media, including a popular topic for satire.

On January 30, Fatma Karume, Chair Woman of Tanganyika Law Society, tweeted a cartoon by the Kenyan cartoonist Gado (September 22, 2017) pointing to the role of Tanzania’s President Magufuli and the death of democracy:

Good morning everyone. Have a lovely day. pic.twitter.com/RKDe0iX5ZG

In recent years, Tanzania has turned increasingly authoritarian in its legislation, resulting in less space for critical political opponents and independent media. Now, critics say the amended Political Parties Act will make it more difficult to practice politics that are critical of the president and Chama Cha Mapinduzi (The Party of the Revolution), in power since independence in 1961.

Opposition is essential for a vibrant democracy. A strong opposition will check up on government and challenge it. If there is no opposition, diversity of citizen needs are unlikely to be represented well.

In 15 tweets, doctoral student Rachel McLellan walked readers through possible consequences of the new act, and characterizes a situation where a critical opposition will find itself cornered:

So most of your ways of convincing voters are gone. What do you do if you're an opp party? Go back to the drawing board and come up with new strategies, right? Well, this bill introduces unprecedented oversight powers to the Parties Registrar that make that v difficult 5/n

Superstitious or not — those critical of Tanzania's authoritarian turn found some wicked relief in the presence of the owl and the unsuccessful attempts to chase it away.

The owl remained. Speaker of the Parliament, Job Ndugai, tried to tweak traditional belief with a pragmatic explanation:

“Honourable Members of Parliament, we have been seeing an owl in this House since morning but in the tradition of people of Dodoma, an owl that is seen during daytime cannot have any effect on anyone. This means that we have nothing to worry about its presence.”

For the critical, however, there is nothing pragmatic about the new act.