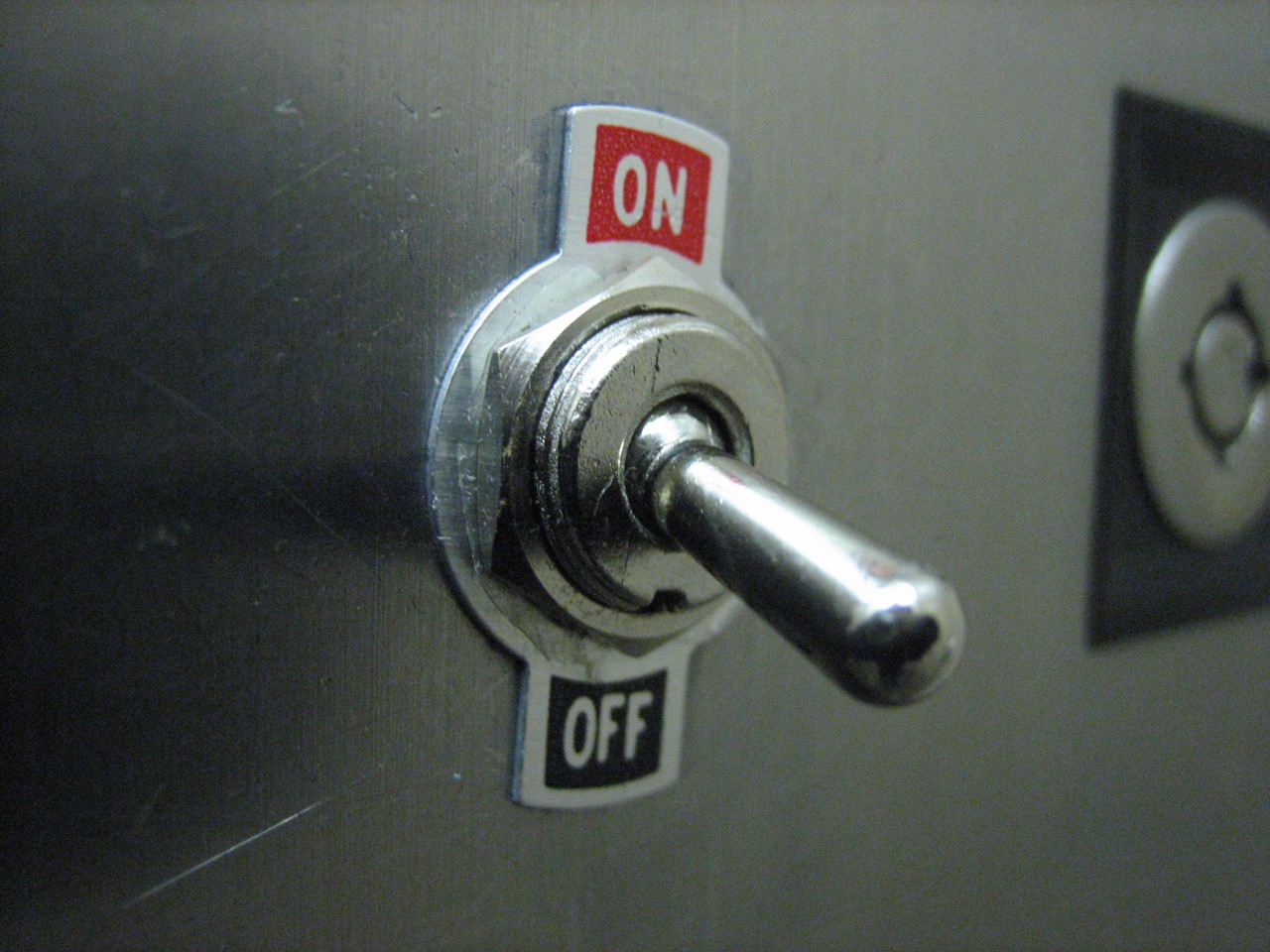 Fears of an internet shutdown in Nigeria looms as tensions continue to rise ahead of 2019 presidential elections. ON / OFF Elevator switch. Photo by Andrew Huff. [Creative Commons (CC BY-NC 2.0)/ Flickr, January 20, 2007]

Fear has spread across Nigeria that the government may switch off the internet during the presidential elections in February 2019. What started as mere speculation has morphed into intense worry as election day approaches. Yomi Kamez of Quartz Africa explains:

You can tell fears of an internet shutdown are running high in a country when citizens are looking into methods of staying online in case of a blockage. This past weekend, Quartz Africa’s guide to staying online during internet or social media blockages was our most read story, driven entirely by traffic from Nigeria. Scores of people shared concerns on social media at the possibility Nigeria might follow other African countries [like Sudan, Zimbabwe] that have taken to blocking social media or shut down the internet altogether under the guise of security concerns.

Recent events related to social media, hate speech, an unjust judiciary firing and replacement, and the breaking down of trust in the media have all contributed to the growing collective concern.

De-fanging the judiciary and rule of law

Onnoghen had been charged with financial negligence and fraud. However, many critics say these charges were a ploy to gag the judiciary ahead of the elections and intimidate other arms of government.

Nigerian President Muhammadu Buhari did not apply these principles. He usurped the powers of the NJC which is constitutionally mandated to recommend such removals from the judiciary or Senate (upper house of parliament) which must then ratify such decisions. The president's action was both tyrannical and lawless.

An editorial in Punch newspaper described Buhari's action as dictatorial and capable of precipitating a constitutional crisis:

Buhari’s action is vile, perfidious and indefensible. It is an action only fit for jackboot regimes, where the constitution could easily be suspended … Needless to say, the president’s singular and misguided action has the tendency to plunge the country into an unnecessary constitutional crisis and, perhaps, derail 20 unbroken years of democratic governance. This is not unlike other despotic and undemocratic acts that the government has been associated with  in the past, even if it might be considered more audacious, far-reaching and probably unexpected.

The governments of the United States and the United Kingdom also condemned the attack on the judiciary. On Twitter, netizens echoed the message.

The message to @MBuhari is simple #EndTyranny and obey the rule of law. Reverse the #OnnoghenSuspension pic.twitter.com/BCPMzarZ6L

“If the president shows himself to be lawless, he is inviting everyone to be lawless” @andyRoidO on #RubbinMinds pic.twitter.com/mr47Uai4ex

Another sign of a possible internet shut down is the government’s tendency to control free speech online on the basis of concerns for national security. Recently, the government directed security agencies to “tackle the propagation of hate speech, especially through social media.” This, according to reports by the Cable, will be achieved by monitoring social media accounts of “prominent Nigerians.”

However, it is ironic that both Lai and El-Rufai are now concerned about fake news and hate speech as a national security threat. As opposition politicians, they both made unsubstantiated accusations to the former government.

For instance, Nassir El-Rufai, current governor of Kaduna State alleged in 2014 — without evidence — that he was “number 7 on [President Jonathan Goodluck’s] sniper’s list”.

On this note, I am going to bed. I am #7 on the GEJ snipers’ list, so I will only worry when GMB, Asiwaju, Amaechi, Akande, etc are killed!

El-Rufai also claimed that Goodluck, then president, was a sponsor of the Boko Haram militant group. Similar claims were made by Lai Mohammed, who was then the National Publicity Secretary of APC.

As opposition politicians, these officials have in fact been proven to be purveyors of fake news and hate speech, using social media to devastating effects. But their actions were never considered a threat to national security; they were neither arrested nor was the internet shut down for this reason.

Social media and elections in Nigeria

Movements like the 2012 #OccupyNigeria and the 2014 #BringBackOurGirls gained global acclaim due to social media usage in Nigeria.

In 2015, social media played an important role in Nigeria's elections when Twitter became a bitter and divisive battleground during campaign season and was used to propagate hate speech and disinformation.

This year, it has already played a major role as the medium of choice for political participation by Nigeria’s energetic youth population. Netizens have used social media to call attention to despotic government actions like the sacking of the CJN, that otherwise would have gone unnoticed by the general public.

Nigerians took to social media to note their displeasure, mount pressure on the government to rescind its action and mobilize protests:

Fellow Nigerians, the Vice President is scheduled to appear on Rubbin Minds, on Channels TV, in 1 hour.

We are protesting peacefully in front of Channels TV studio.

Whether or not the internet holds steady during elections, there is strong reason to believe that political speech online and on the street will be a target of government scrutiny.