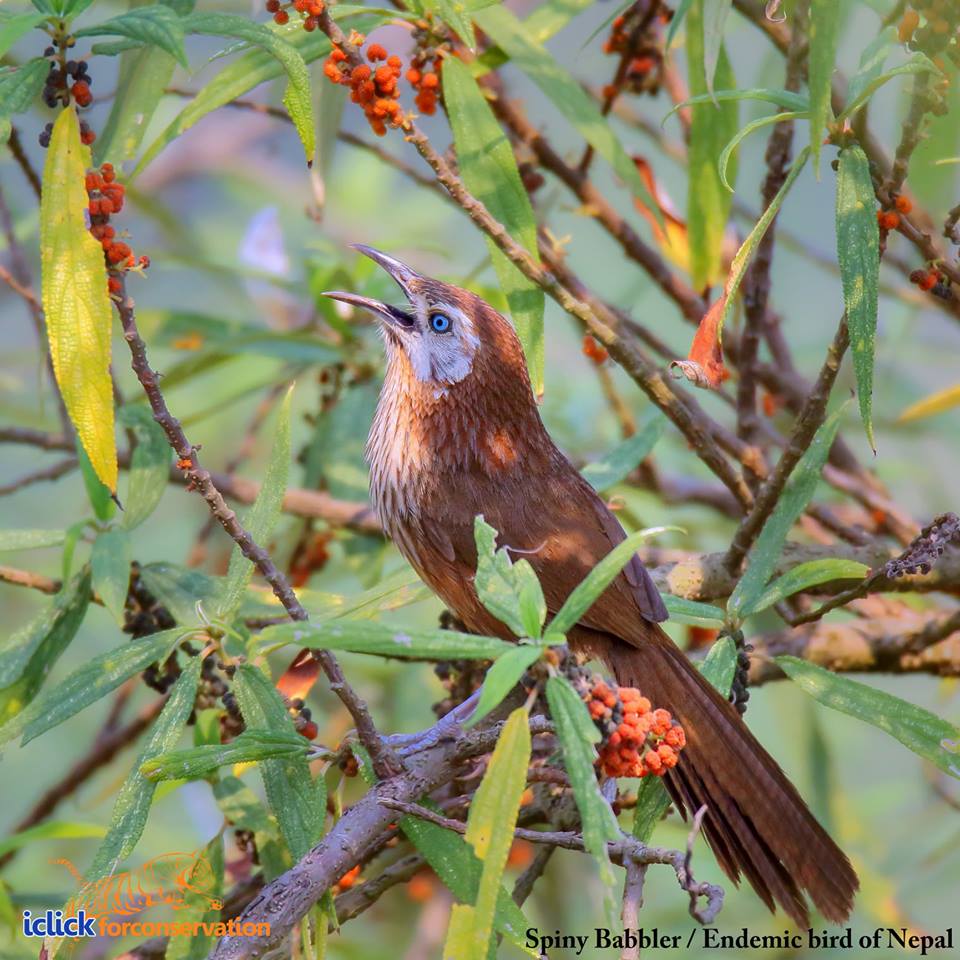 Spiny Babbler, the bird found only in Nepal. Photo by Sagar Giri. Used with permission.

Although more than 800 bird species are found in Nepal, the Spiny Babbler (Turdoides nipalensis) is the only bird that is endemic to the country. The greyish-brown bird, called Kaande Bhyakur in Nepali, lives in dense scrub and can be spotted more easily at elevations ranging from 500 meters to 2135 meters. Although the Spiny Babbler has been fascinating ornithologists the world around for years, environmental degradation is threatening this unique, much-loved bird.

The medium-sized bird is shy in nature and it’s difficult to observe them, except early in the breeding season when males often sing in the open.

Finally, a sight of the Spiny Babbler – a bird that occurs only in Nepal! Though they are Babblers, they sing a variety of rather loud & melodic songs from their hideouts amongst thick bushes, which resounds across the hills nearby – waking you up the possibility of seeing them. However, the amount of activity seems quite subdued in Winter. Spring & Summer season is probably the best time to catch a glimpse of this special bird which is recorded only in a few spots in Nepal. Makes one wonder what came to be that these birds have restricted themselves to only this geographical & political region. Thanks to @tharu_hunk & @nikitakhamparia for this. #spinybabbler #endemic #endemicbirds #nepal #chitwan #birdsofnepal #birdsoftheindiansubcontinent #birdsoftheworld #uperdangadi #nepaltourism #nuts_about_birds #birdingenthusiast #natureinfocus #nepalphotography #nepalphotoproject @insta.nepal #nepalnature

The book The Status of Nepal’s Birds: The National Red List Series states:

It seeks insects almost entirely on the ground among low bushes, appearing only occasionally. Spiny Babbler mounts branches of bushes or small trees to sing, bill pointed upward and tail down. It is a good mimic, with squeaks, chuckles and chirps. It is most easily located by its song and occasionally sings as late as September and October. The species is subject to seasonal altitudinal movements.

“It was a species that had defied scientists for years, since 1843 or 1844. At that time Brian Hodgson’s Nepali collectors working for him in the unknown vastnesses of Nepal had secured several specimens,” he writes. The Spiny Babbler “had remained a mystery ever since, one of the five species of Indian birds, which, along with the Mountain Quail, had apparently vanished from the face of the earth. But not quite, for if my guess was right, here it was hopping about large as life on the wooded slopes above Rekcha.”

The Ornitholidays group made the long drive from Kathmandu to Chitwan yesterday. The highlight was seeing Nepal’s only endemic bird, Spiny Babbler. @55birder pic.twitter.com/i0aBnvCbFE

The bird is threatened by the clearance of scrub for agriculture and expansion of urban areas. Outside protected areas, it is sometimes threatened by hunting, and the hills surrounding the Kathmandu Valley have seen a decline in Spiny Babbler numbers. However, the same habitat loss that is destroying the Spiny Babbler's habitat in some areas might actually be creating more in others. As the forest continues to thin due to deforestation throughout the country, the scrub-dominated habitat that they call home is being created in its wake. But only time will tell what is in store for the population of Nepal's only endemic bird.