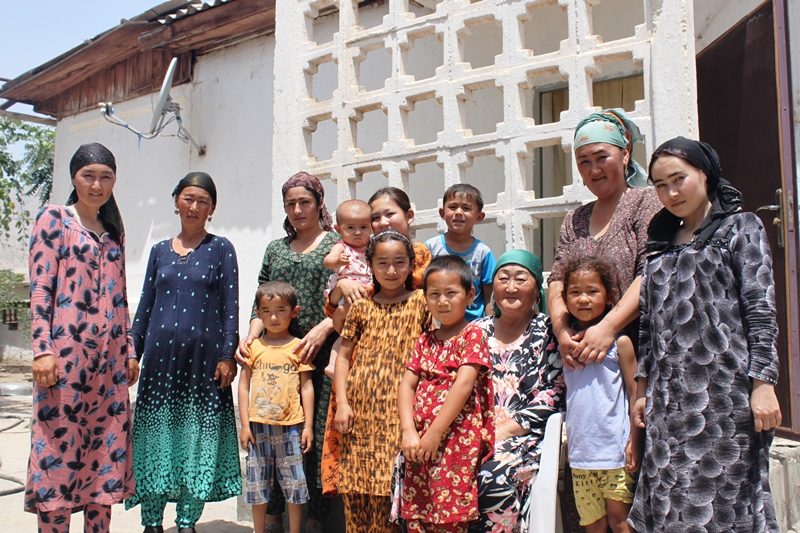 Larisa Pak surrounded by family in her house in the village of Sukhrob, Farkhor district, Tajikistan

With her long, colourful dress, covered hair and accentless ownership of the local tongue, Larisa Pak does not stand out from the other women in her village a few kilometres from Tajikistan's border with Afghanistan. But her surname, which she retained even after marrying her late husband, is a reminder of another homeland some 5,000 kilometres east of the one her parents adopted.

Up to 200,000 ethnic Koreans were deported to Central Asia from the Russian Far East during the 1930s as Soviet dictator Josef Stalin ordered the forced displacement of entire minority populations suspected of lacking loyalty to Moscow.

The Kremlin's specific fear regarding the Korean population was that it was being infiltrated by agents of Japan, which was occupying the Korean peninsular at the time and casting an expansionist glance across the Asian continent.

Many Koreans were initially placed in labour camps in Kazakhstan and Uzbekistan, where unknown numbers perished from malaria and other diseases working in abominable conditions.

Over time the ‘Koryo Saram’, as Soviet Koreans were known, gradually shed their native language for the Union's lingua Franca, Russian, and, in rarer cases, the titular languages of the countries they settled in, such as Tajik and Uzbek.

For 65-year-old Pak's parents, Tajikistan was a second stop in Central Asia after the steppes of Kazakhstan. Farkhor, the district in which she grew up, got married and raised 10 children, hosted a collective farm growing rice where mostly Koreans worked.

Today she is the only Korean left in Farkhor, where the gruelling soundtrack of war between Afghan government forces and the militant Taliban can sometimes be heard in the distance.

“I never felt unwelcomed or uncomfortable among the locals. I grew up among Uzbeks and Tajiks, and later, when married, started dressing like local women, converted to Islam, and began praying five times a day,” Pak told Global Voices, circled by daughters, son, in-laws, and numerous grandchildren.

During the 1990s, Tajikistan was consumed by a war of its own. Koreans, along with other minorities, including Germans and Russians, fled the republic over the course of a five-year civil conflict that cost tens of thousands of lives and deepened the economic devastation wrought by the Soviet collapse. 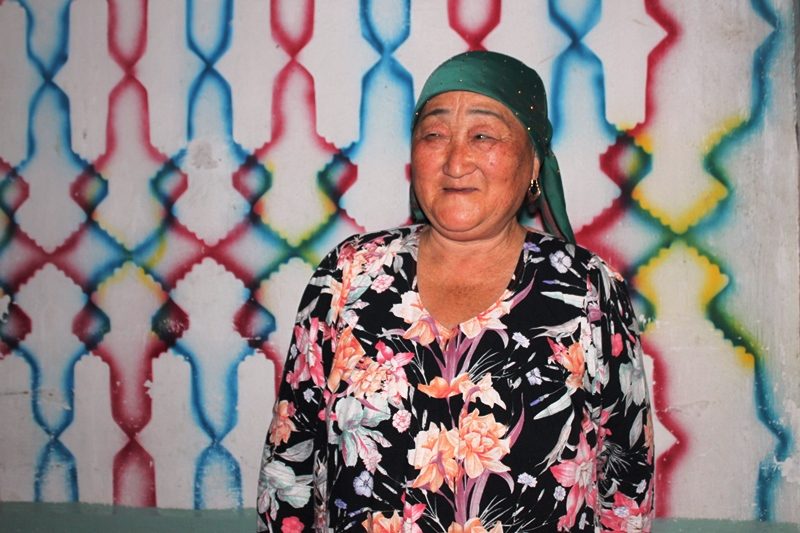 Larisa Pak inside her home in the village of Sukhrob, Farkhor district, Tajikistan. Photo by author.

If there were 13,500 Koreans in Tajikistan in 1989, there were just over 600 in 2010 according to a national census carried out that year. Most of those remaining live in the capital Dushanbe.

In Farkhor, where Pak grew up, Koreans sold their homes to local Tajiks and Uzbeks. The rice-growing ‘sovkhoz’ where they lived and worked has been privatised and its workforce has doubled.

Life here has grown less comfortable since the dawn of Tajikistan's independence in 1991, Pak says. Water lines have broken down, the medical point consistently staffed during the Soviet era no longer has a doctor and electricity is inconstant.

Pak, however, never thought of leaving southern Tajikistan, where she spent most of her working life as an accountant for local authorities.

“I gave all my daughters into Tajik and Uzbek boys following the local customs. My sons also married local girls. Now I have so many wonderful grandchildren, daughters-in-law and neighbours,” Pak said.

Pak was just 18 when she married her neighbour, an ethnic Uzbek boy, Mengal Mamatkulov. The language of their household was Tajik, although Pak can also speak Uzbek and counts Russian, the language her parents spoke, as her mother tongue.

Pak calls Mamatkulov's death several years ago her “only sadness.” 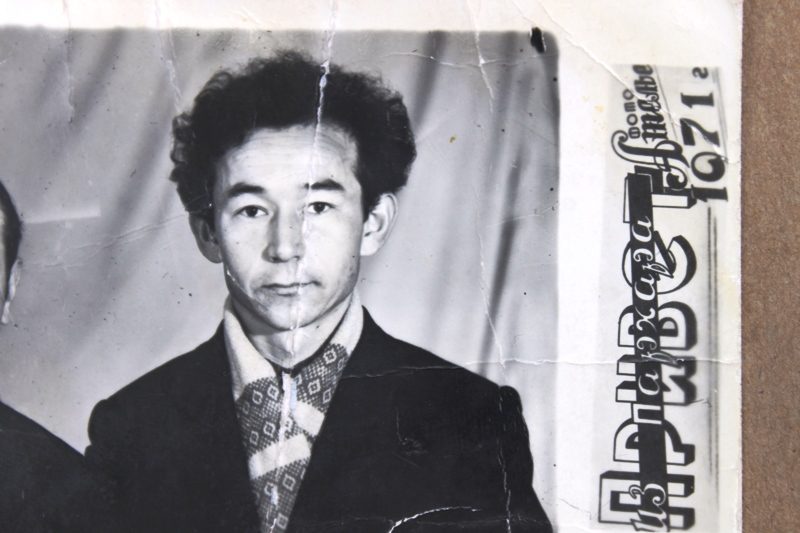 A foot in Korea, a heart in Tajikistan

While Larisa Pak spoke of her in-laws in glowing terms, her eldest daughter, 47-year-old Safarmoh, told Global Voices that her mother's journey to becoming an honorary Central Asian wasn't always a smooth one.

Key to her acceptance in her husband's family, Safarmoh recounted, was the love and respect of Mengal's father, who singled her out as his favourite daughter-in-law. This special relationship helped remove some of the doubts others in the family had about Pak's heritage. 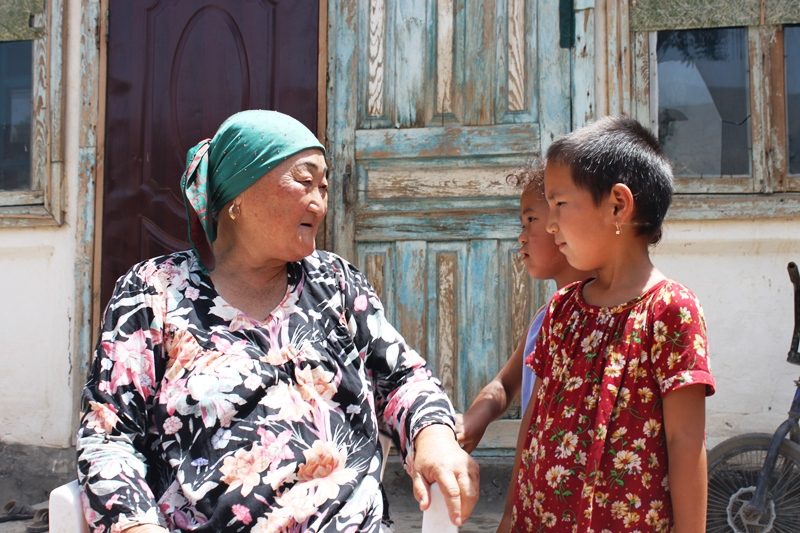 Larisa Pak consulting with grandchildren. Photo by the author.

Every so often, fellow villagers get a reminder of her Korean roots. On more than one occasion, she has been visited by representatives of Seoul's embassy in the country.

In 2004, South Korea introduced new legislation that allows ethnic Koreans in the former Soviet Union and China preferential access to its labour market. The country where four of Pak's sons and one daughter now live and work has also become a popular migration destination for non-ethnic Korean citizens of the Central Asian ‘stans’.

Pak says that the money her children have sent back from South Korea helped pay for air conditioning in her home — a great blessing given daytime summer temperatures in southern Tajikistan regularly threaten 50 degrees Celsius.

She has never traveled there herself, however, and shows no burning desire to do so in her advancing years.

“I have grown used to living here the my whole life. I am satisfied and happy with the life I have here, among this nation, which also became my nation. This is my home.”

See also: Central Asia and South Korea are more connected than you might think