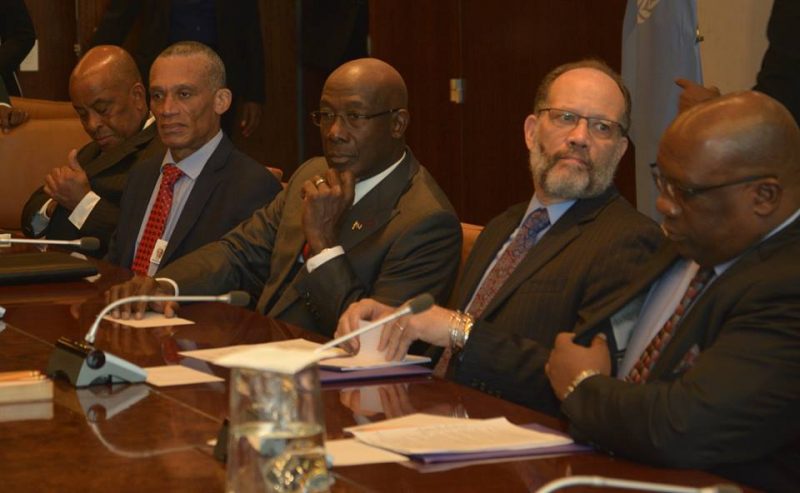 The Caribbean Community (CARICOM) nations’ position on the situation in Venezuela became clearer over the past weekend—and it’s anything but unified. Allegiances didn’t necessarily align, however, with those expressed in the Organization of American States (OAS) resolution on January 10 that sought to declare the second term of Nicolás Maduro’s presidency illegitimate.

In the January 10 vote, five nations supported the OAS line, three voted against it, and five abstained.

On the night of January 24, 12 out of the 15 CARICOM member states signed on to a collective statement reaffirming the CARICOM guiding principle of “non-intervention and non-interference” in the affairs of sovereign nations. The signatories include Jamaica and St. Lucia, who reversed the positions they had taken in favour of the OAS resolution on January 10.

Guyana, which shares a disputed border with Venezuela, had issued its own statement earlier on January 24, taking a less categorical stance, but supporting “calls made at both the regional and international levels for immediate dialogue involving all political and social actors, with a view to the preservation of the democratic process and a return to normalcy.”

Haiti, on the other hand, has recognised Juan Guaidó as Venezuela's interim president, and so has the Bahamas. Both nations had voted in favour of the OAS declaration.

Some Caribbean leaders have directly condemned the United States’ support of Guaidó. Talking to the Miami Herald, Gaston Brown, prime minister of Antigua and Barbuda, called it “a brazen regime change” and “an affront to democracy within the hemisphere.” St. Vincent and the Grenadines’ prime minister Ralph Gonsalves accused the US of “carrying out a coup d’état.”

In Trinidad and Tobago, Prime Minister Keith Rowley and other politicians bristled at a statement released by the US ambassador criticising the country for “recognising the undemocratic and illegitimate government of Nicolás Maduro.”

On Monday, January 28, a delegation of CARICOM leaders including the prime ministers and foreign ministers of Trinidad and Tobago, Barbados, St. Kitts and Nevis and Grenada met in New York with United Nations Secretary-General Antonio Guterres.

Also on Monday, Maduro reportedly told members of the diplomatic corps that he had spoken to CARICOM leaders and was “open to mediation talks in ‘Trinidad and Tobago or wherever’ with the Venezuelan opposition”.

A zone of peace

CARICOM’s position is clearly influenced by concern about the possibility of external military intervention in the Venezuelan crisis. Donald Trump has warned that “all options are on the table”. Venezuela’s military is reportedly in talks with Guaidó, but so far has stood with Maduro, and the arrival of nuclear-capable Russian bomber jets in Venezuelan territory was reported in December. The latter is of special concern to Guyana, whose border dispute with Venezuela has intensified since the discovery of oil in Guyanese territory in 2015.

In the January 24 statement, CARICOM leaders invoked “Article 2 (4) of the United Nations Charter which calls for Member States to refrain from the threat or the use of force.” They also called on “external forces” to “refrain from doing anything to destabilise the situation and (…) to avoid actions which would escalate an already explosive situation to the detriment of the people of the Bolivarian Republic of Venezuela and which could have far-reaching negative consequences for the wider region.”

The statement also emphasised “the importance of the Caribbean remaining a Zone of Peace,” invoking an idea first advanced by Maurice Bishop, who came to power in Grenada in a revolution that toppled the government of Eric Gairy in 1979. In an address to the General Assembly a few months after taking power, Bishop said:

“We join with our sister Caribbean nations in re-emphasising our determination to preserve the Caribbean as a zone of peace, free from military intimidation. We demand the right to build our own processes in our own way, free from outside interference, free from bullying and free from the use or threat of force.”

“In Nobody’s Backyard”, another of Bishop's well-known speeches, attacked the persistence of US president Theodore Roosevelt's characterisation of Latin America and the Caribbean as Washington’s “backyard.” Bishop’s overthrow and subsequent execution by a faction of his own People’s Revolutionary Government sparked the United States’ invasion of the island in 1983. 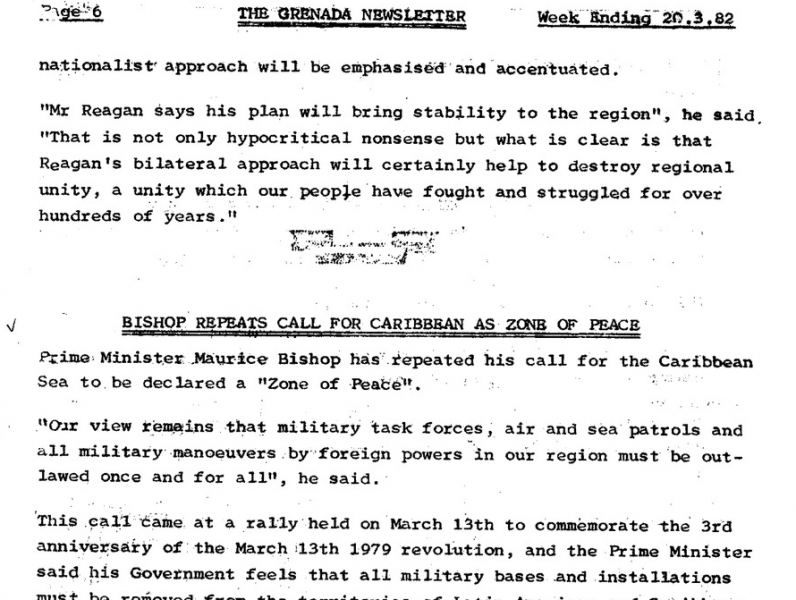 An image from the March 1982 edition of The Grenada Newsletter. SOURCE: University of Florida Digital Collections.

The Community of Latin American and Caribbean States (CELAC), a regional bloc formed in 2011 to promote self-definition outside of the influence of Washington, formally proclaimed the Caribbean region a zone of peace in 2014.

In my capacity as Chairman of @CARICOMorg I am engaging in shuttle #diplomacy The volatile situation in #Venezuela does not auger well for the #Caribbean region remaining a zone of #Peace pic.twitter.com/4F5zlpYGJi

The idea has also been invoked in the last couple of years by Caribbean politicians such as Guyana's president David Granger and the country's prime minister Moses Nagamootoo. Antigua and Barbuda's prime minister Gaston Browne used the phrase in December 2018 in response to the reported arrival of Russian bomber jets in Venezuela:

“This hemisphere must remain a zone of peace,” Browne said in a radio interview. “We abhor any conflict or military provocation that could lead to warfare, destabilise our region and bring harm to innocent civilians.”