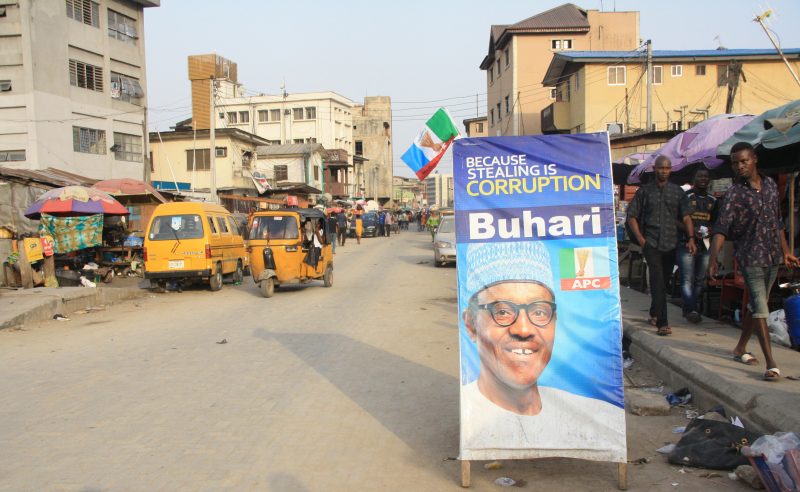 Nigerian President Muhammadu Buhari campaign sign on the side of the road. Photo by Clara Sanchiz/RNW, February 28, 2015 (CC BY-SA 2.0)

Nigeria will hold presidential elections on February 16, 2019. Based on the 2015 elections, propaganda may play a major role in deciding the fates of this year's presidential hopefuls.

The two major contenders, incumbent Muhammadu Buhari of the All Progressives Congress (APC) and former Vice President Atiku Abubakar of the People's Democratic Party (PDP), are already engulfed in propaganda wars targeted to discredit each other ahead of the elections.

Abubakar's recent visit to the United States made news because ten years ago, he was linked to a multi-million dollar business scandal with a U.S. congressman. The U.S. Senate Committee on Homeland Security and Governmental Affairs also accused Abubakar of money laundering and bribery. Therefore, it was assumed that he would never be allowed back into the U.S.

But Abubakar has always asserted his innocence, insisting that then-President Olusegun Obasanjo had framed him as a “corrupt person” after the two had a falling out in 2006. Abubakar had served as Obasanjo's vice president and was accused of sabotaging Obasanjo's third term bid because he had presidential aspirations of his own.

Obasanjo long maintained that Abubakar could not visit the United States because he had a “case to answer“, suggesting that if he did visit, he'd be arrested and arraigned on corruption charges. Indeed, in 2016, the United States Department of Justice stated that public court records “do not show cases filed against a defendant named Atiku Abubakar”.

Over the past few months, there had been rumours of planned U.S. trips and subsequent cancellations due to visa restrictions, reinforcing the rumours.

On January 17, 2019, Abubakar's tweet announcing his arrival in the U.S. prompted much celebration on Twitter with the trending of multiple hashtags including #AtikuNowThatYouAreInTheUS mirroring the hashtag #BabaNowThatYouAreBack created to celebrate Buhari's return to Nigeria in 2015.

However, new conspiracies arose about why Abubakar was not arrested while in the U.S.

Presidential media aide Lauretta Onochie alleged that Abubakar was not arrested because Nigerian Senate President Bukola Saraki presented him as one of his aides. It was rumoured that Abubakar and the PDP had signed a $1.1 million yearly lobbying contract in September 2018 with “a key member of U.S. President Donald Trump's political operation” to gain free passage into the U.S., according to Popular Information, a US-based media outlet.

But this was quickly dismissed as false because the dates did not line up:

#FakeNews How did Atiku who was not declared the PDP presidential candidate until 7/10/18 sign on a lobbyist on 21/9/18 as stated on your attached document? cc @AfricaCheck @FactCheckNgr https://t.co/jwZSfwoiRg

Just like Abubakar, Buhari has also had to contend with propaganda.

A rumour has persisted for months that President Buhari had died and that a clone named Jubril was acting in his stead. The president has consistently denied the allegations as “ignorant rumours”.

One of the questions that came up today in my meeting with Nigerians in Poland was on the issue of whether I‘ve been cloned or not. The ignorant rumours are not surprising — when I was away on medical vacation last year a lot of people hoped I was dead. pic.twitter.com/SHTngq6LJU

Though it was never proven, it was suspected that these rumours emanated from Nnamdi Kanu, leader of the separatist Biafra movement — Indigenous People of Biafra.

Propaganda played a major role in Nigeria's 2015 presidential elections. Supporters of then-President Goodluck Jonathan of PDP and Muhammadu Buhari of APC both launched falsehoods against each other in order to garner exaggerated partisan support. Media scholar Olubunmi E. Onafuwa asserts that keywords and phrases were used to target opponents’ characters:

Keywords such as, incompetence, corrupt, sexist and religious fanatic, dictator, deceit, forgery, false promises, misappropriation of public funds and extortion, were employed to describe both 2015 presidential candidates via social media. Critics of Muhammadu Buhari described him as representing a ‘return to an ugly past which is best forgotten.’ Goodluck Jonathan was deemed ‘clueless’ about the administration of Nigeria, who allegedly allowed crime and corruption to flourish under his administration.

This “exaggerated posturing for support” heightened tension during the 2015 elections, with APC supporters asserting confidence in Buhari's certain win. PDP supporters, however, countered APC confidence by announcing biased statements such as “APC popularity is only on paper” through the media.

In 2015, the APC also utilised other propaganda tactics to destabilise PDP opponents’ campaigns to win the elections. They depicted PDP as corrupt and composed of “crooks and treasury looters“. The APC directly targeted the PDP, insisting it was filled with corruption and sympathisers of Boko Haram, an Islamic militant group. According to AllAfrica:

As this was being done, the APC used the tool of raising the alarms to perpetually put the ruling party and even security agencies on the defensive. These alarms included constant ‘discovery’ of plot to either assassinate its presidential candidate or to arrest some of its leaders.

The PDP was so rattled by numerous accusations lodged against them that former President Goodluck Jonathan recently said:

Propaganda may help you win elections but can’t help you govern and that is what APC has seen in the last 32 months.

The validity of the allegations and rumours surrounding both major candidates cannot be independently verified. Yet, propaganda's role in discrediting the candidates during 2015 presidential elections may be a telling sign of more of the same during forthcoming elections next month.