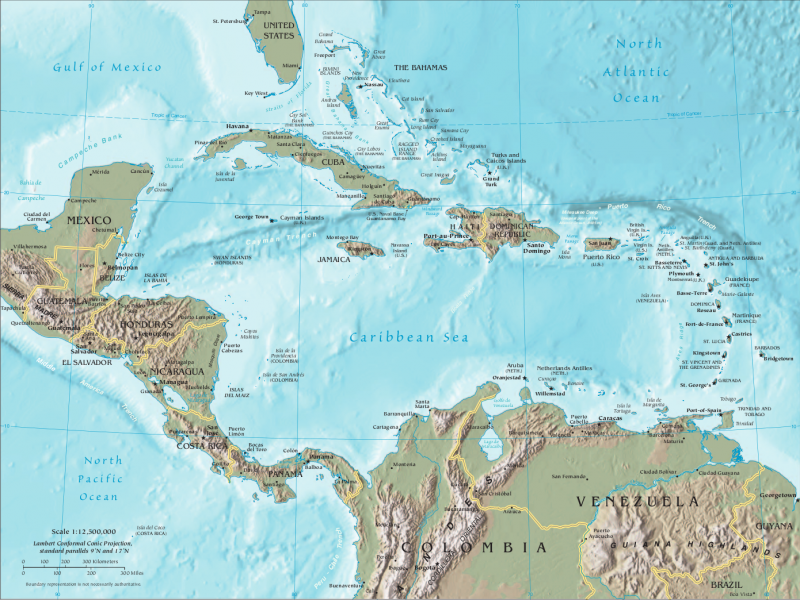 Map of Central America and the Caribbean. Public domain via Wikimedia Commons.

On January 10, 2019, the day Nicolas Maduro was sworn in as president of Venezuela for a second term, the Permanent Council of the Organization of American States (OAS) adopted a resolution declaring Maduro’s election illegitimate and calling for sanctions.

The vote on that resolution divided the OAS’ English-speaking Caribbean member states, with five nations (Bahamas, Jamaica, St. Lucia, Guyana and Haiti) supporting; three (St. Vincent and the Grenadines, Dominica and Suriname) voting against; and five others (St. Kitts and Nevis, Trinidad and Tobago, Antigua and Barbuda, Barbados and Belize) abstaining.

Several of those states still sent representatives to Maduro's inauguration. St. Kitts and Nevis was represented by its prime minister, and Trinidad and Tobago, Antigua and Barbuda and Suriname sent senior government ministers.

Non-interference in the affairs of sovereign nations is a key tenet of the Treaty of Chaguaramas, the foundational document of the Caribbean Community (CARICOM), and in March 2018 CARICOM's 15 members reaffirmed this position, firmly rejecting the idea of international intervention in Venezuela's affairs at an Inter-Sessional meeting in Haiti.

But with opposition leader Juan Guaidó declaring himself interim president yesterday in Venezuela, and being recognised by the United States, United Kingdom, Canada and most Latin American states, Caribbean nations may need to decide where they stand.

At the time of writing, only two countries in the English-speaking Caribbean have made statements on the matter, and they happen to be the ones with the most at stake: Guyana, and Trinidad and Tobago.

The Foreign Ministry of Guyana, one of two CARICOM members located on the South America continent, issued a carefully worded statement on Facebook around noon AST on January 24, saying that the Guyanese government is:

“…gravely concerned at the deepening of the political crisis in the Bolivarian Republic of Venezuela and supports calls made at both the regional and international levels for immediate dialogue involving all political and social actors, with a view to the preservation of the democratic process and a return to normalcy.”

Guyana has a right to be “gravely concerned”. The country shares a border with Venezuela whose limits have been disputed for over a century: the portion of land claimed by Venezuela amounts to almost 40 percent of Guyanese territory, and the stakes have become even higher since the discovery of oil off the coast of Guyana. In December 2018, Venezuela's navy intercepted an Exxon-Mobil vessel doing exploration work in Guyana's maritime space.

The Rowley govt is getting heat from some quarters in [Trinidad and Tobago] for not recognising Guaido as president (interim or not), but Guyana is also stopping short of that explosive move. There's way too much machismo and bellicosity around this issue. Many of the countries giving implied support to regime change don't share a border (or narrow straits) with a country that could unravel socially, even more than it has recently.

The “narrow straits” Gordon refers to is the 11-kilometre stretch of water that separates the island of Trinidad from the Venezuelan coast. The two countries have deep historical ties, and Venezuelans have moved back and forth between Trinidad and their country for decades. 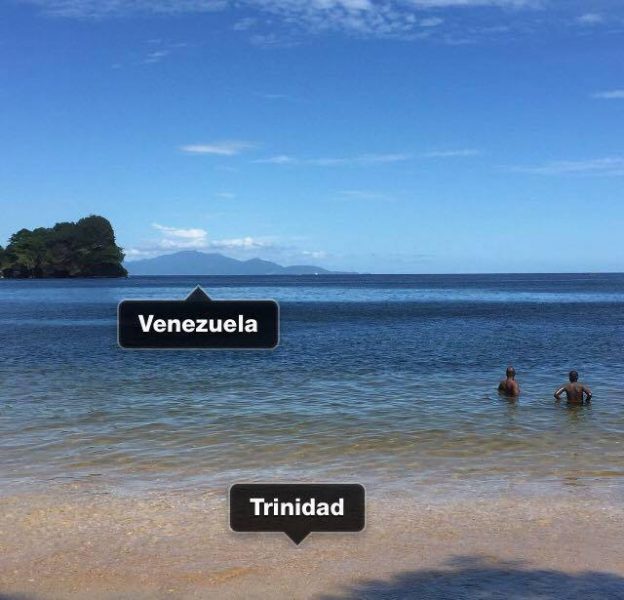 The silhouette of Venezuela seen from Macqueripe Bay on the north coast of Trinidad. PHOTO: Georgia Popplewell. (CC BY SA)

Trinidadian fisherfolk have clashed with Venezuela's notorious Civil Guard over alleged violations of maritime territory, and in the last decade, Trinidad has received an increasing influx of Venezuelans fleeing the deteriorating economic and political situation in their country, many arriving illegally, and in some cases officially seeking asylum. The official estimate of the number Venezuelans living in Trinidad is around 60,000, which amounts to more than 4 percent of the population.

The two countries also have strong economic ties. In August 2018, Prime Minister Keith Rowley signed a deal for Venezuela to supply the country with natural gas, and critics see Trinidad and Tobago's hesitation to designate Venezuelans entering the country as refugees as pandering to Maduro.

At a press conference yesterday, January 23, Stuart Young, the country's National Security Minister, said that Trinidad and Tobago was prepared to assist or mediate in the Venezuelan situation, but neither endorsed nor denounced Guaidó. According to the local news daily Newsday, Young “emphasised that this country's foreign policy remains one of non-intervention in the affairs of sovereign nations.”

Local newspapers reported that a group of Trinidad-based Venezuelans gathered yesterday in front of the Venezuelan embassy in Port of Spain to voice their support for Guaidó.

“Those of us who rub shoulders…”

Many other countries in the English-speaking Caribbean have enjoyed close and positive relations with Venezuela. In spite of its own travails, the South American nation has been generous with post-hurricane aid, and several Caribbean countries have been beneficiaries of low-interest oil agreements under PetroCaribe, the energy alliance created by the late Venezuelan president Hugo Chavéz.

The tide would seem to be against Maduro. But what you get when you endorse regime change, is civil war. If the regional powers break Venezuela, guess who picks up the pieces? Neighbouring countries, that's who. Maduro is a dictator, in power through a fraudulent election. That does not make this a good move for those of us who rub shoulders [with] that country.