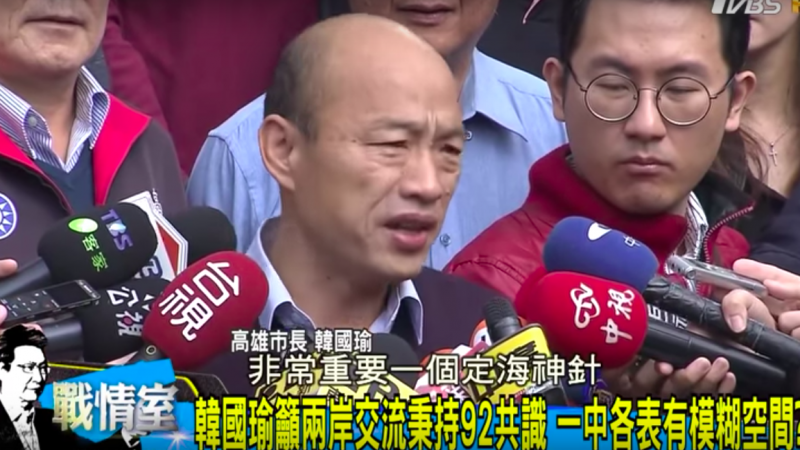 Even after Beijing claimed that the 1992 consensus entails the unification with Taiwan based on “one country two systems”, KMT's newly elected Kaohsiung mayor Han Guo-yu stressed the need to uphold the consensus. Screen capture image.

On November 24, 2018, Taiwan wrapped up its mid-term elections and multiple referendums with the results favoring the opposition Kuomingtang (KMT) party who won a majority of city and county seats from the ruling Democratic Progressive Party (DPP).

The referendums consisted of 10 questions ranging from LGBTQ rights and same-sex marriage, the choice between “Taiwan” or “Chinese Taipei” at international sporting events, the development of nuclear power, and other topics that touched upon a wide range of issues from human rights to diplomatic relations with China.

The results from the referendums have disappointed LGBTQ and anti-nuclear activists who believe that the public was misinformed. At the same time, several post-election surveys and polls indicated that many Taiwanese may have cast their votes without background knowledge of the issues at stake. The misconception of “the 1992 consensus” and Taiwan's energy supply conditions serve as two typical examples of how the public made ill-informed choices.

During the mid-term election debate, Han Kuo-yu, KMT's candidate running for Kaohsiung city mayor, upheld his party line and expressed his support for the 1992 consensus in the debate. Eventually, he succeeded in his bid to lead in the heart of the ruling DPP's territory. Hence many assumed that those who voted for Han and other KMT candidates do not object to the 1992 consensus. Some commentaries even interpreted the election results as a victory for China.

However, when Han told the media immediately after his victory that he would uphold the consensus and set up a cross-strait working group to rebuild relations with China, his statement immediately triggered a spike in searches for the term “1992 consensus” on Google inside Taiwan — leading many to believe that the Taiwanese public did not pay attention to it and its stipulations.

Google search for ‘the 1992 consensus’ after the election. The data is from Google Trends.

Similar to the Brexit referendum, Google trends also showed similar search patterns. Taiwan netizens’ interpretation of the search drama is consistent with a number of post-election surveys, with the latest survey conducted in early January. The results of the survey show that 55.5% of those polled didn't know what the consensus meant and nearly 44.4% of the survey participants thought the consensus was actually the acceptance of China and Taiwan as two separate entities.

At the same time, China's President Xi Jinping's 2019 New Year speech on cross-strait relations with Taiwan made it clear that, for him, the 1992 consensus entails unification with Taiwan based on “One Country Two Systems” led by the People's Republic of China. Xi's proposal was a wake-up call to many Taiwanese who originally thought that the consensus meant that Taiwan would remain an autonomous self-ruling state.

Taiwan’s President Tsai Ing-wen of the DPP decided to denounce the ambiguous consensus soon after she was elected in 2016. The opposition KMT blamed her for the strained cross-strait relations with Beijing which suspended diplomatic contact with Taiwan, imposed economic sanctions, forced other countries to cut ties with Taiwan and bolstered its military presence in the Taiwan Strait shortly after the president took her stance.

Beijing's sanctions have led to a growing sense of anxiety and insecurity in Taiwan, allowing the opposition KMT to successfully use disinformation to mobilize uninformed Taiwanese to vote against the ruling party.

The passing of the referendum to lift the legal restrictions in the use of nuclear power after 2025 serves as another example of how Taiwanese cast their votes without basic knowledge of the issues at hand.

After the referendum was passed, the Risk Society and Policy Center reported an opinion poll which was conducted four months before the referendum. The results of the poll reflected Taiwanese citizen's misconceptions about the country's energy supply. Nuclear power plants only provided 8% of Taiwan’s electricity in 2017, but 44% of poll participants thought that nuclear power plants were the most important electricity provider in Taiwan.

Hikoyoshi Lu shared the results of the poll on his facebook and commented:

44% of Taiwanese have misperception about nuclear power. The number is shocking. If so many citizens have no idea about the percentage of electricity generated by nuclear power, how can we expect them to make the right decision when they vote for the related referendum?

This is a very serious warning! Now we know that we need to make the information more sufficient and transparent when we hold referendums for important topics. In addition, we should criticize those arguments that are made intentionally to confuse the voters and misguide the voters to vote when they do not really understand the referendums.

The phenomenon of citizens making ill-informed choices in democracies is a global challenge. The government and media are responsible to help citizens receive correct information. However, without citizen participation in combating the mobilization of ignorance, they will remain passive receivers of information.