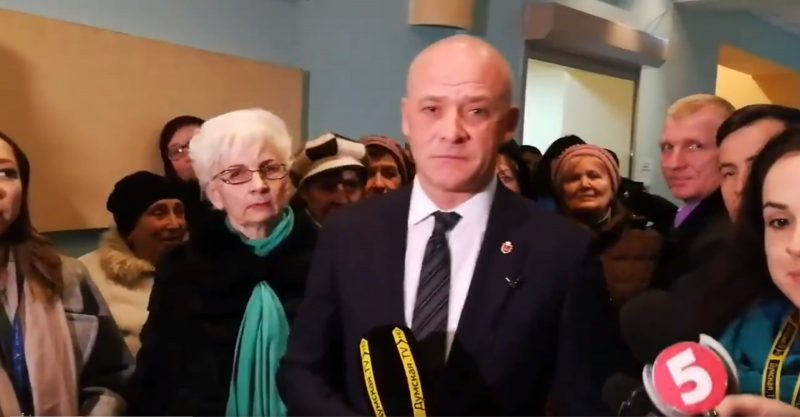 Odessa Mayor Gennadiy Trukhanov seconds before his security shoved off Radio Svoboda reporter Mikhail Shtekel out of courthouse where he gave a press briefing. Screengrab from Shtekel's video posted on Twitter.

Odessa's police will investigate the city's mayor Gennady Trukhanov for “impeding the lawful professional activity of journalists”, a punishable offence by Ukraine's criminal code, following an incident in which his security detail physically assaulted a local reporter.

On December 27, Radio Svoboda journalist Mikhail Shtekel posed a question to Trukhanov at a press briefing, to which the mayor responded by pushing him away while his security proceeded to expel the journalist out of the building.

Shtekel, whose employer Radio Svoboda is the Ukrainian version of Radio Free Europe, recorded the whole incident on camera and posted the video on Twitter soon afterward:

Instead of answering the question by @radiosvoboda [Radio Liberty in Ukrainain] mayor of Odessa Gennadiy Trukhanov and his guards pushed me away and left Malinovskyi court building. They were helped to do it by the police. @NPU_GOV_UA [National Police] @MVS_UA [Ministry of Internal Affairs of Ukraine] does this fall under the Article 171 or not?

Article 171 of Ukraine's criminal code typifies the crime of “impeding lawful professional activity of journalists,” which covers illegal seizure of reporting materials, denial to provide access to information, among other actions. It imposes fines and a maximum prison time of three years.

On December 29, Shtekel stated, on his Facebook profile page, that with the help of his lawyers he had filed a criminal complaint related to Article 171 against Trukhanov, his guards, and the police officers who participated in the aggression. On January 2, the police of Odessa confirmed for Detector Media that they had initiated a criminal investigation of the incident.

The mayor's contempt for journalists

This is only the most recent episode in which Trukhanov or his subordinates have attacked journalists. In July 2018, when reporter Bogdan Osinskyi asked him why he had referred to a group of environmentalists as “green worms,” the mayor grabbed the journalist's phone and tried to hit him with it.

In April 2018, British journalist Andy Verity, who had come to Odessa with the BBC to report on a corruption probe that involves the mayor, was pushed, knocked down, and kicked in the groin by Trukhanov's security guards after he approached him with a question. The BBC has captured the whole incident on camera.

Finally, just before the end of 2018, Trukhanov said that Member of Parliament Mustafa Nayem, a former journalist, asks “stupid questions.”

Separately, Trukhanov is a defendant at an emblezzlement case related to the sale of Odessa's city hall building known as the Krayan plant. A trial began in October — the press briefing where Shtekel was attacked on December 27 followed a court hearing of this trial.

The mayor has also received harsh criticism, including in international fora, for the behavior of his “municipal guards”. Those are private security officers hired by the city of Odessa under suspicious circumstances who have been accused of multiple human rights violations, including against journalists.

Trukhanov is expected to run for re-election in 2020. However, if any of the criminal cases he's facing ends in conviction, he might find himself fighting for his own freedom rather than for his seat as mayor of Odessa.

On November 30, Trukhanov presented his own work in a positive light at an annual ceremony at Odessa's city hall. Such enthusiasm probably isn't shared by the city's journalists, for whom press freedom feels ever more elusive.