India's Sabarimala row: How women fought against religious patriarchy for the right to pray 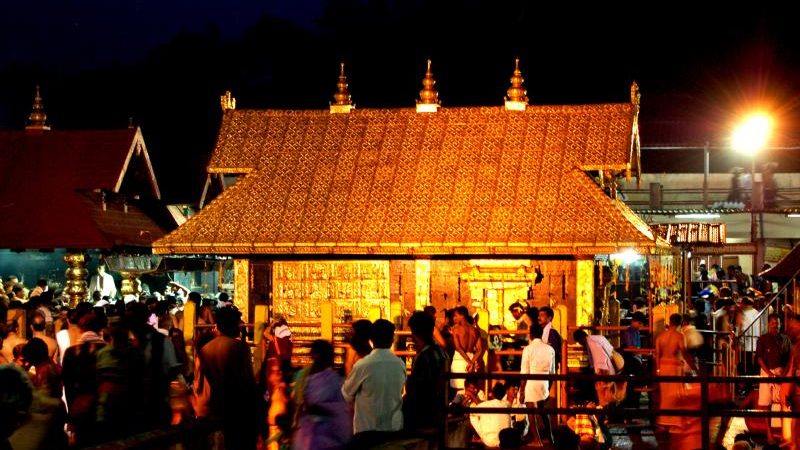 In India's southern state of Kerala, a July 2018 decision taken by the country's Supreme Court allowing women to enter and pray at an iconic temple is creating controversy.

The Sabarimala temple, which honours the Hindu celibate deity Lord Ayappa, is located on a hilltop in Kerala and women of menstruating age have been historically barred from entering the religious shrine because of their alleged ‘impurity‘ — a widespread belief in the Indian subcontinent.

The Supreme Court verdict, seen as groundbreaking by activists, allows women between the ages of 10 to 50 years to enter the premises of Sabarimala temple. However, it created a political firestorm as India's ruling right-wing Bharatiya Janata Party (BJP) supporters clashed with Kerala's state government over the ruling.

The historic verdict and the overruling of the ban have led to a series of controversies. Politically-aligned groups and religious zealots protested against women entering the religious premises. Hundreds of Brahmin men and women also joined protests.

Kanaka Durga and Bindu Ammini, two women who made history by becoming the first in centuries to enter a hill temple in southern India, are in hiding after threats by hardline Hindu groups. Read more: https://t.co/oyCZ9ou1Yv 📷 Sivaram V pic.twitter.com/uiO0Xkie3m

In January, Kanaka Durga and Bindu Ammini entered the temple. The two women met on Facebook soon after the court's decision was made public. They both had tried to enter the temple earlier but had been stopped several times.

After videos of Durga and Ammini entering the temple went viral, more women followed suit. Soon afterwards, there were reports of protests and clashes as rightwing religious groups, family members and political parties denounced the move.

One of the women, Kanaka Durga, who entered #Sabarimala, is hospitalised after she was allegedly attacked by her mother-in-law on her head. Incident happened early today morning, as she returned home, say sources close to her. Stable, referred for tests. @ndtv

PM in Kerala: The conduct of Kerala LDF govt on Sabarimala issue will go down in history as one of the most shameful behaviour by any party & govt. We knew that communists do not respect Indian history, culture and spirituality but nobody imagined that they will have such hatred. pic.twitter.com/rlQtRbVyMI

#Sabrimala is going to take many down. Specially, #FakeFeminists. #StupidMedia and #UrbanNaxals. Do not underestimate Lord Ayappa or his devotees. https://t.co/zjPGjjrsS0

many centuries, the voices of women are being heard, a shrine that bars women of menstruating age, seems dysfunctional to all of us. The question arises, how can this even be an issue today – after all these years of battling for liberty? This is a vital and important question

Fight for the right

Amid political protests supported by the ruling party defending the ‘sanctity of the temple’, many organisations championing women's rights and activists have been attempting to enter the temple. Protests from opposition groups have resulted in violence and arson, while police authorities have stepped in to send back female devotees or safeguard them while entering the venue.

Women entering Sabarimala are the “most sinful”? What are we prime minister?

It is all very well to say that religions must adhere to the normal rules of liberal democracy, but the truth is they don’t. Gender equality is a vital principle in civic society and in political democracy, but it is by no means universally observed in the religious world. Muslim mosques don’t allow men and women to pray together in the same space. The Catholic Church does not permit female priests. Some Shinto monasteries are off-limits to women altogether. Eight Hindu temples in India do not allow men to enter during specified periods, and the Kumari Amman temple situated in Kanyakumari does not permit them at all. The law does not interfere in such matters. But in Sabarimala, it has chosen to.

The Sabarimala controversy has resulted in a conflicting battle of viewpoints. The ruling BJP, affiliated with Hindu volunteer organization Rashtriya Swayamsevak Sangh (RSS), has strongly taken an anti-state government stance against its leftist policies which the right-wing central government wants to dismantle to win a turf war in Kerala ahead of general elections.

Every Temple has their own beliefs.

There are temples where men are not allowed.

We should read minutely what the Respected Lady Judge said on the Sabarimala case: PM @narendramodi

And the analogy with Kashmir:

Terror Apologia has reached a sickening height at The Telegraph. What Indian military does in Kashmir is counter-offensive against the terrorists but don't let your anti-national agenda stop you from equating them with #Sabrimala devotees pic.twitter.com/oez30ZWxxW

The feminist issue combined with political protests stood at the centre stage of India's struggle for gender justice as the argument of ‘impious’ woman has been used at mosques, temples and other religious celebrations in the South Asian sub-continent. But women have dared to fight in courts and remained triumphant.

The outrage of this saw many feminist activists publishing articles and decoding the convoluted issue:

#Sabarimala stains India's image on women's rights. No point celebrating Indira Gandhi or the cool quotient of a woman Defence minister if female blood is still a blot. My take in @washingtonpost. Read, share and tell me how much you disagree :-) https://t.co/uix8NjYVqG

When is the SC taking note of this alleged “purification” of the #SabarimalaTemple & sacking the priest? Women are untouchables? Absolutely disgusting

God has created men and women to compliment each other. God doesn't discriminate but men do. Traditions should be respected but such concepts such as ‘impure women’ should be discouraged. Is there any parameter to judge men who visit the holy shrine? #Sabrimala

This entire chain of protests and events have set an example for women to now have equal rights as that of men. After Sabarimala, the recent High Court verdict provides women with legal access to the Agasthyakoodam peak, an 1868 meter high peak situated in Thiruvananthapuram district in the state of Kerala.