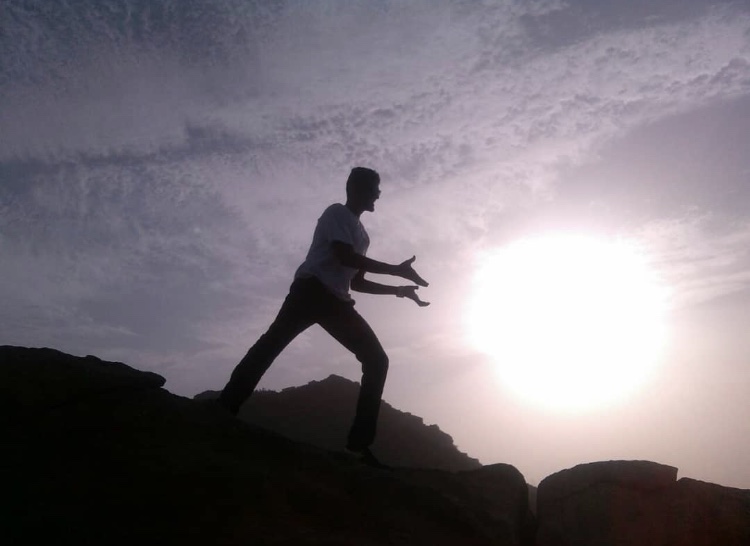 Galileo in Sana'a, Yemen. Photo used with his permission.

Away from the media's spotlight in Yemen, the country’s Christian minority is struggling to survive amidst an increase in targeted attacks.

Religious facilities have been destroyed. In 2015, there were three attacks on Christian institutions in the southern port city of Aden, according to Human Rights Watch.

In 2016, also in Aden, an Indian priest was kidnapped and tortured during an attack on a Missionaries of Charity home during which four nuns were killed. The gunmen, presumably with the Islamic State (ISIS), wrote on the walls: ‘“There is no God, but God. Mohammed is the messenger of God. The Islamic State. God’s curse on Christians and Jews.”

Due to these difficult conditions, many Christians in Yemen have been reduced to practicing their religion underground.

‘Galileo’ (an alias) is in his late twenties. He became an atheist for a few months before converting to Christianity three years ago. He believes that this has put his life at risk on a daily basis.

He is part of an estimated 41,000 Yemeni Christians in the country, although he believes the number to be higher at approximately 70,000. He describes the religious risks he faces amidst the country's ongoing conflict:

It would cost them less than a dollar to kill me.  It may happen at any time. They killed my friends; can you imagine what it’s like getting killed for praying? For being peaceful? You think it is scary? My friends were not afraid. I may die at any time but I am not afraid. The Lord is my rock, my fortress and my deliverer.

Christians in Yemen experience persecution for their faith. Leaving Islam is seen as a betrayal by many and may be punishable by death. Hence, they keep their faith hidden. They may not even tell their parents:

Many [Yemeni] had to flee but many are converting and getting baptized. Christianity in Yemen is growing despite the risks we have to face. They are seeing the truth in the bible, there’s some sort of spiritual catharsis they feel. And the violence they’re facing is making them seek peace. They found peace in the bible.

Those who do find a Christian community often pray in empty apartments and delete their chats online:

We keep on changing our location. We don’t want them to notice our regular meetings underground. Christians in Yemen dream of praying in a church. Christian women dream of wearing a necklace with a cross. I want to get the cross tattooed on my chest. It is an act of revolt that my soul needs. But I am aware it is a suicidal act. I can’t even like posts about Christianity on social media.

He confirms that he is not afraid of death but afraid of leaving his community:

Death doesn’t scare me, but leaving Christians who need me does. They need my support, I have a mission here.

Galileo believes actions speak louder than words, and his actions got him arrested in Sana'a, where he is based. In 2017, he dressed up as Santa Claus on Christmas and gave kids toys and food. Houthis arrested him and tortured him for days.

They humiliated me. They beat me nonstop for 4 days. When I convinced them that I am not Christian, that I was just helping kids; they let me go.

The pro-government forces are based in the southern port city of Aden while Houthis control key central provinces in the north, including Yemen's capital, Sana'a. Al-Qaeda and ISIS have also spread as a result of the multifaceted regional, local, and international power struggles.

Despite the torture, Galileo has no regrets. He believes that Christians have become doubly vulnerable during the conflict between Houthi rebels and Yemeni government forces supported by a Saudi-led coalition.

We need help, I don’t know how or who should help us. We’re dealing with militias, not a government, which makes it harder for us to find a solution. I am glad you’re helping me get my voice heard; I’m tired of living in the shadows. The media shows Yemenis starving but what we crave the most is freedom of speech, freedom of religion. Food is for the body but freedom is for the soul.

Galileo struggled to travel to Lebanon but finally made it in November 2018, when he was finally able to realize his dream to pray in a church without fear.

He did not want to stay in Lebanon for too long however, as he believed his community in Yemen needed him.

When he went back to Sana’a, he was contacted by the Houthis, which control the region. He tried to run away and seek refuge in Al Hudaydah where his mother is located. But when he told her about his faith, she did not accept him. He had to go back to Sana’a, where he was arrested.

During the time of writing this piece, Galileo was unreachable for some time. We later learned from him that he had spent around 20 days in jail before being released on January 9, 2019. He said he faced physical and psychological torture.

Galileo is now in hiding because he believes they let him out so that they can track his community. His name is with the Houthis, so escaping from the region they control is difficult. He says he needs public and diplomatic support to get out of Yemen as soon as possible because his life could end at anytime.