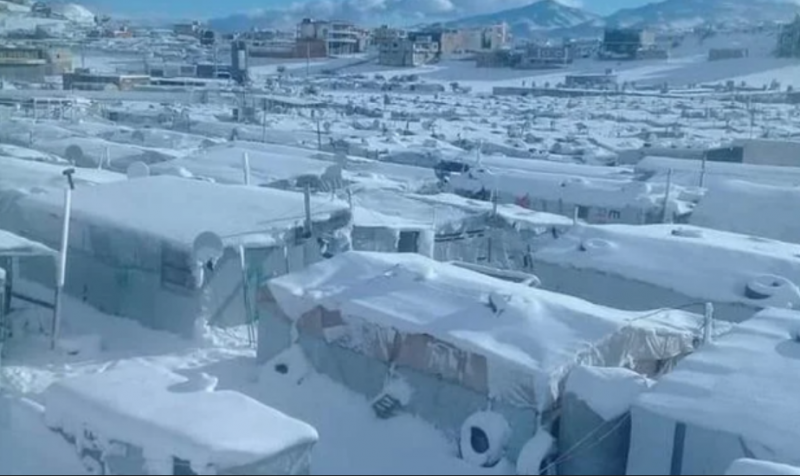 Syrian refugees in Lebanon face floods and freezing temperatures amidst a series of storms called “Norma” that hit on January 6, 2019. It brought five days of high levels of rain on the Lebanese coast and snow on Mount Lebanon and the Bekaa Valley. The storm caused widespread damage in Lebanon, flooding highways and closing schools for two days in some regions of the country.

Syrian refugees had to battle the storm in makeshift informal camps, as Lebanese authorities do not allow for permanent structures to be built. According to a U.N. Refugee Agency (UNHCR) report published on January 9, “70,000 refugees living in around 850 informal settlements could be at risk of either flooding, heavy snow or extreme cold”.

Another UNHCR article stated that more than 11,300 refugees had been affected: settlements in Dalhamiya in the Bekaa Valley have been completely flooded.

People are sick. Everywhere there is water. We cannot sleep at night. It has been three days like this. All night we sit and watch the kids and we cannot do anything for them. Their situation is very bad.

We’ve never experienced such a situation before. The mattresses and the duvets got wet. We didn’t sleep all night. I had to put blankets on wooden boards and lie there. I can’t even make myself a cup of tea because of the flooding.

According to the Associated Press, the refugee settlement in Bar Elias in the Bekaa Valley, near Lebanon's longest river, the Litani, was flooded during the storm. It is home to approximately 420 refugees, including 100 children.

The AP also reported that a Syrian girl lost her life after she drowned in an overflowing river north of Lebanon.

Additionally, the Lebanese Red Cross said that 200 people were forced to evacuate from their camp on Lebanon's northern border with Syria after a local river overflowed.

The camp of Arsal in the Anti-Lebanon Mountains received heavy snow and subsequent damage, and videos of the camp were widely shared on social media:

Some Syrians activists and Twitter users lamented the poor living conditions, adding that Syrian refugees are increasingly stuck between a rock and a hard place. In other words, between poor living conditions in Lebanon, and serious security risks in an Assad-controlled Syria if they return.

Do you know why people are still here?
The answer is because Assad is still in his position.

The moment #Assad goes, it is moment when their suffering ends pic.twitter.com/1fuM3fi5VD

Some Syrian refugees denounce the negligence of local authority in the Bekaa. For example, Hussam Mansour told Al Jazeera that he had called the local municipality of Ghazze in the Bekaa many times to raise the ground levels of the tents, to no avail.

Syrian refugees in Lebanon will have to face a new storm that will bring wind gusts of over 100 Km/h and 5 meters waves. The storm, named Miriam, will peak on Tuesday, January 15.

UNCHR stated that emergency stocks and sanitation supplies were replenished in anticipation of the new storms.

Despite the difficulties endured by Syrian refugees throughout the country, Lebanese President Michel Aoun said that “the refugee crisis still weighs [on Lebanon] economically and socially and on security” and that refugees should return to Syria so that they could live “with dignity.”

This is in line with the anti-refugee rhetoric taken by his party, the Free Patriotic Movement (FPM) over the years, and notably by his son-in-law and foreign minister, Gebran Bassil, who also heads the FPM.

Read: Why Syrian refugees in Lebanon fear going back to an Assad-controlled Syria

Aoun, an ally of the pro-Assad militant group Hezbollah, is pushing the international community to return Syrian refugees back to so-called ‘safe areas’ in Syria. Some ministers in the Lebanese government denounced the push and claim that dozens of refugees who returned were killed.

Stories of returned refugees facing imprisonment, forced conscription or death have been floating around anti-Assad Syrian circles, particularly in the past couple of years.

Wessal al Mustafa, a refugee in Lebanon, told Aljazeera that “there is nothing to return to.”

Another refugee, 25-year-old Sleiman Ahmad, told the Independent: “If I go back, I would be conscripted or arrested, [..] I have a small daughter. What would happen to her?”