Before it was banned, this Facebook profile urged young people to join violent attack group in northern Mozambique 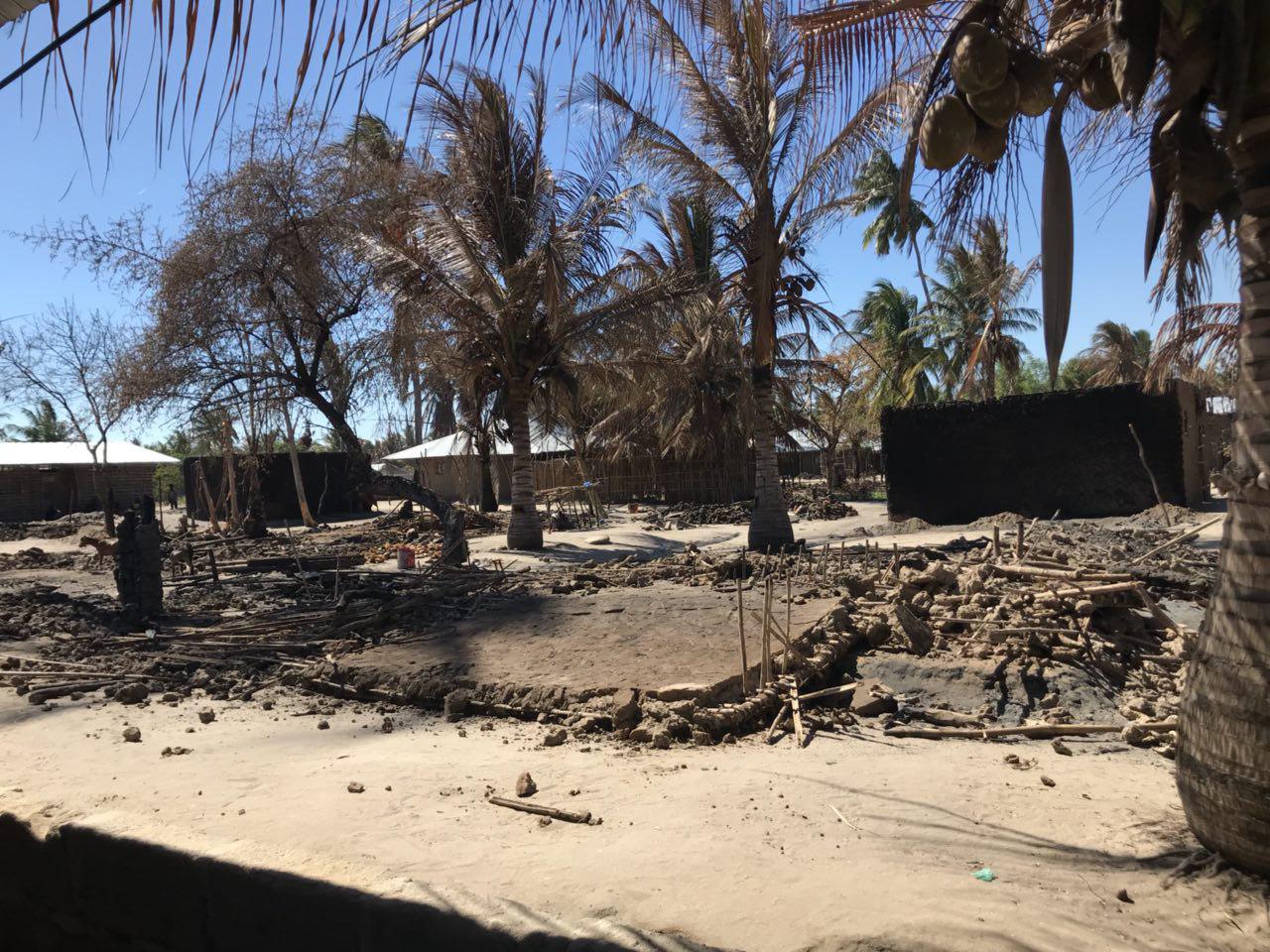 Image of houses destroyed by fire during attacks. Photo by Borges Nhamire, used with permission.

Since October 2017, an unknown armed group has been terrorizing the north of Mozambique with rogue attacks that have left over 200 dead and many villages destroyed.

The attacks occur mostly at night and in the early morning in remote parts of Cabo Delgado province, near the border with Tanzania. Armed with guns and machetes, group members invade a village, shoot and decapitate people, set fire to houses, steal food, and run away to the nearby forest.

As Mozambican authorities struggle to uncover the origins and motivations of the group, local newspaper Carta de Moçambique (letter from Mozambique in Portuguese) revealed in December 2018 that a Facebook account using a fictitious name might have helped attract and groom members of the mysterious gang.

Under the name Shakira Júnior Lectícia, the profile was active for 14 months starting on 25 October 2017. During this period, it posted messages praising the attacks in Cabo Delgado and called on youths to join the group with promises of large sums of money. The account claims that Shakira Júnior Lectícia is a resident of Expansão neighborhood, in the city of Pemba, the capital of Cabo Delgado.

Eventually, the account was shut down — it has been inaccessible since December 10, 2018. At that time, it had reached Facebook's limit of 5,000 friends and amassed hundreds of followers.

The account's profile photo, along with several images it published over the past year, were taken from people that say they are not involved with the attackers in Cabo Delgado, according to Carta de Moçambique's story. Those photos usually depicted people holding handfuls of meticais, Mozambique's currency.

Carta de Moçambique reporters tracked down four people whose photos had been posted by the account, including the legitimate owner of the profile photo. They have all confirmed that the pictures are of them and that they have never had any contact with the account. None knew how the account administrators obtained the photos. 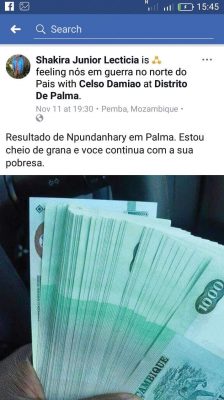 Photos by Shakira posted on Facebook. Screengrab by MediaFax.

All four people interviewed by the publication have ties to Cabo Delgado. Some live in the province, including in districts under attack. Others live just outside Cabo Delgado.

According to Carta de Moçambique, which monitored the account’s activity, on 11 and 22 November 2018, Shakira published photos of a young man holding several metical bills, with a caption implying that he received the money as a reward for having joined the insurgency.

An attack in Pundanhar district on November 11 resulted in the death of six men. Their bodies were found in a forest with signs of attack by machetes.

Shakira posted a photo just hours after the attack, before Mozambique's media outlets had reported on it, which raised further suspicion.

Mozambique’s National Department of Criminal Investigation is investigating the case.

Authorities have charged 189 people in connection with the attacks so far. A trial that began in October 2018 is expected to reach a verdict in early 2019, according to the local press.

The defendants include nationals from Mozambique as well as of Tanzania, Somalia, Burundi and the Democratic Republic of the Congo. They are 42 women and 147 men.

Police often conduct operations in the area and regularly detain people suspected to have links with the violence. They have returned many young men to their families after arresting them while they are on route to the affected districts. Police says agents groom them with promises of employment and money.

It remains inconclusive how the attacks in Cabo Delgado are funded, the types of training used, and the real interests of the attackers.

Although there have been strong suspicions of faith-based terrorism, so far this is speculative. A video that was widely shared on social media, including on Facebook, on January 2018, helped fuel such theories.

Recorded in a forest, it shows a group of five men wearing civilian clothing and headscarves, handling machine guns, and a man holding a machete. Speaking in Portuguese, the man praises the attack in Mocímboa da Praia (where several people were killed in late 2017) and calls on Mozambicans to join the group.

The majority of Mozambique’s population is Christian, with around 18 percent identifying as Muslim. Most of Mozambican Muslims live in the northern part of the country.

A study published in May 2018 by researchers from the Institute of Social and Economic Studies (IESE) and the Civil Society Support Mechanism Foundation (MASC) suggests a different theory.

After interviewing several stakeholders in the affected districts, it concluded that the group's objective is economical: it aims to create opportunities for the marginalized youth to gain from trafficking wood, ivory, charcoal, and rubies in the resource-rich province.

Cabo Delgado is home to the 40 percent of the world’s known ruby reserves and has enough gas and oil to turn Mozambique into the third largest exporter of natural gas in the world after Qatar and Australia starting 2022.

However, its population remains impoverished, with 24 percent of people aged 15-24 currently unemployed, according to government data.