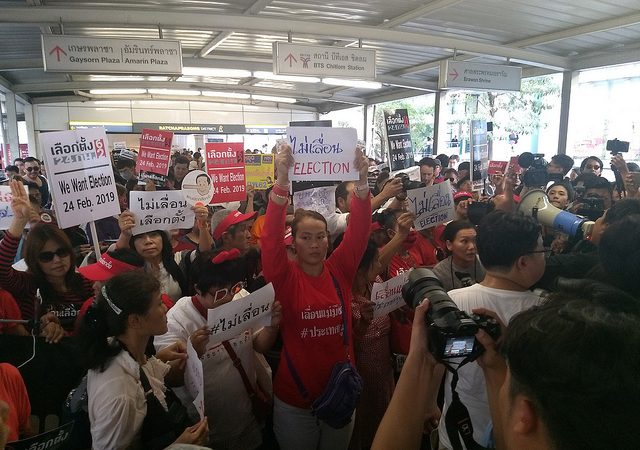 Bangkok protesters criticized the decision to delay anew the elections scheduled on February 24, 2019. Photo from Prachatai, a content partner of Global Voices.

News about another possible delay in parliamentary elections brought Thai citizens to the streets for the first time since the government lifted the ban on public assemblies of five or more people in December 2018.

On January 6, protesters gathered at the Victory Monument BTS train station skywalk to condemn the postponement of the polls. Meanwhile, around 200 protesters joined a bigger assembly on January 8 at the Ratchaprasong Intersection in downtown Bangkok demanding the issuance of a decree that will officially set the date and the preparations for the February elections.

Some leaders of political parties described the protest as a reflection of the Thai people's desire for the return of democracy.

The Thai army grabbed power in 2014 and established the National Council for Peace and Order (NCPO) to govern the country. It detained several opposition leaders, imposed strict media controls, and outlawed the gathering of five or more people in public places.

It vowed to restore civilian rule and organize elections once political reforms are implemented. It drafted a constitution in 2016 which stipulated the holding of elections but guaranteed the continued powerful role of the military in all levels of the bureaucracy.

General Prayut Chan-o-cha, head of the NCPO and prime minister, has been vague in answering questions about the date of elections. But on December 2018, his government confirmed that elections will be held on February 24, 2019. The government also rescinded the order that banned political campaigning and public assemblies.

On January 3, Deputy Prime Minister Wissanu Krea-ngam announced that the February 24 elections might be postponed in order to not interfere with the government’s preparation for the coronation of King Maha Vajiralongkorn which will take place on May 4. The monarchy is a revered institution in Thailand and the government implements one of the harshest Lese Majeste (anti-Royal Insult) laws in the world.

Wissanu’s announcement angered many high school students and led them to use the Twitter hashtag, #เลื่อนแม่มึงดิ (Luen Mae Mueng Di: Delayed Again, You Mother***), to express their frustration. Students also used the hashtag #dek62 (Kids of 2019).

This entire problem came about because Mr. Prayut is not a man of his word. Mr. Prayuth should at least come out and apologize to the kids.

The earlier announcement that elections will take place in February had already caused the rescheduling of the nationwide General Aptitude Test and Professional Aptitude Test (GAT-PAT) which students take in order to be admitted to universities. Postponing the elections would mean disrupting the schedule of GAT-PAT and the preparations of students for this important test.

General Prayut acknowledged the sentiment of students and called them his ‘grandchildren’ as he appealed for patience and understanding.

On January 11, just days after the protests took place, Deputy Prime Minister Wissanu made an announcement that elections will take place no later than March 11.

What is clear from this update is that it’s already impossible to hold the elections on February 24. The statement also didn’t address reports that the Department of Provincial Administration has issued a circular letter instructing provincial registrars to stop the preparations for elections.

Activists questioned the commitment of the NCPO to restoring civilian rule since it has been repeatedly delaying the timetable for the holding of elections.

Meanwhile, the army Commander-in-Chief general accused critics of having a ‘one track mind’ about the elections. He said the government also needs to prioritize the coronation of the King.